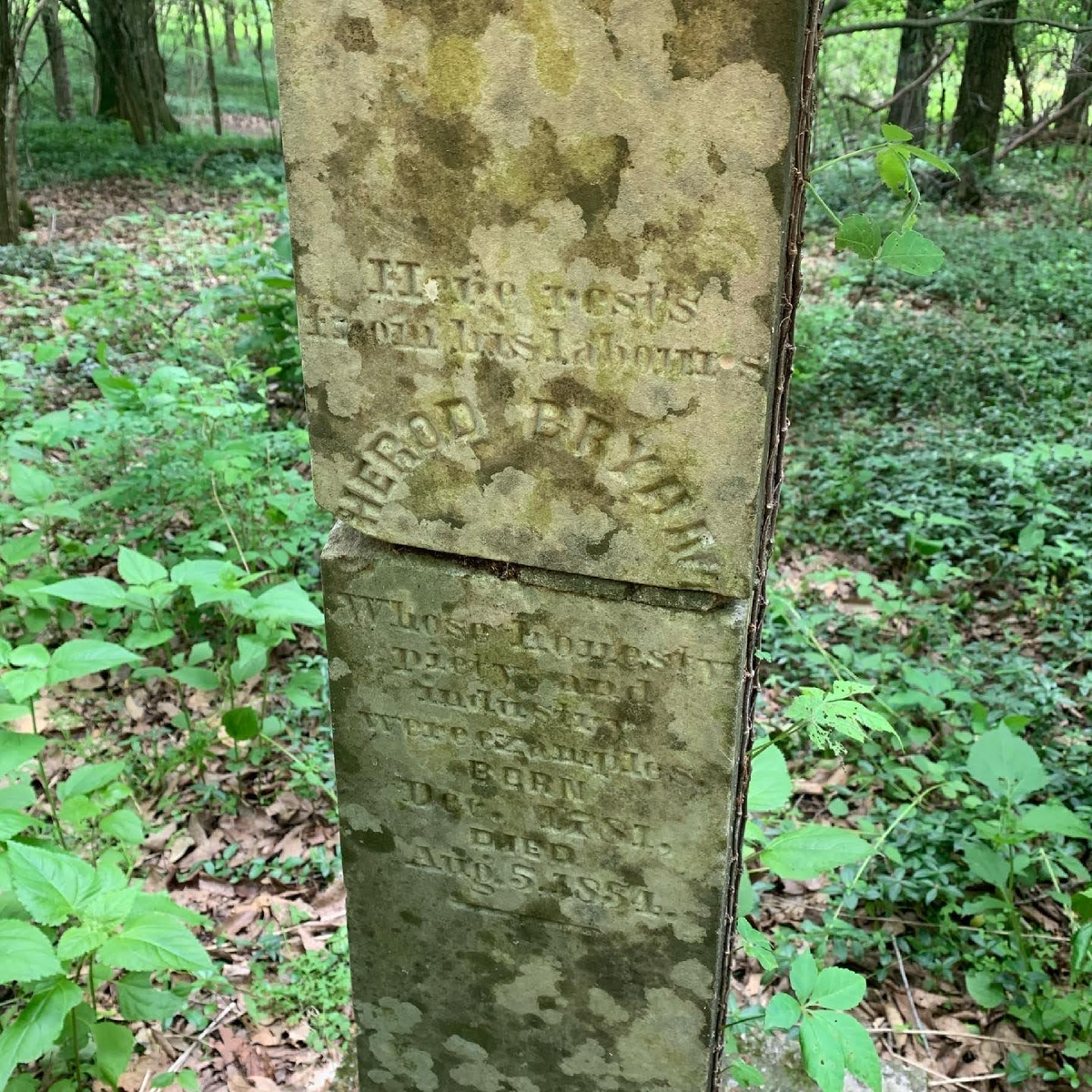 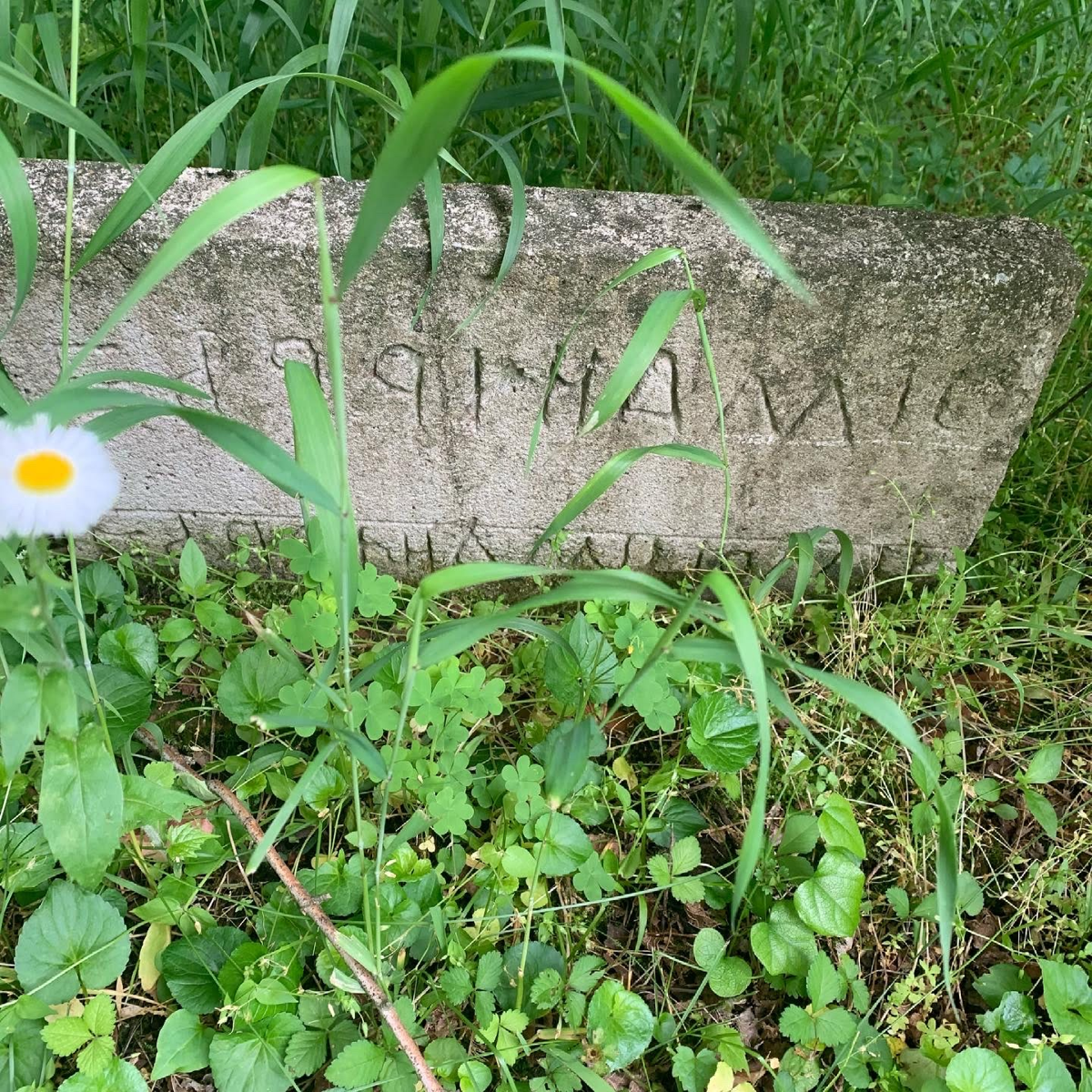 In my hunt for headstones made by Nashville artist William Edmondson, I ended up at two African American cemeteries in Davidson County with, sadly, no Edmondsons, but complicated histories that are worthwhile to try to understand. We’ll get to the second one in the future.

Today, let’s focus on the Bryant Town Family Cemetery out in Donelson. Sherod Bryant came to Nashville before 1820. He was born in the early 1780s in either Virginia or North Carolina. A lot of things get said about Bryant, but tracking down actual primary sources is difficult. I’m certainly no exhaustive Bryant scholar, but it doesn’t appear that any trained historian is — which is a shame, because there’s a lot of strange stuff going on with Bryant that would be interesting to know about.

Sherod Bryant, if you’ve heard his name before, is best known locally as the example of how Black people owned slaves too, so why are Black people complaining about slavery? I saw many sources referring to him as the richest Black person in either Middle Tennessee or Tennessee altogether before the Civil War. I didn’t see any analysis of how people had decided that was the case. He was, though, respectably wealthy. He owned land along Lebanon Pike, on the Davidson/Wilson county line and lots downtown in what was known as Black Bottom.

He had 14 children by at least two different women. At least a few of them also went on to own slaves.

But here’s the thing: After roughly 1820, freed slaves had to leave Tennessee. So if you were a free man of color but your wife and children were enslaved, you wouldn’t necessarily buy them to free them, because then the whole family would have to leave the state. If you bought them to own them, though, you all could stay in your home. So, Bryant could have owned slaves because that’s how free people in Tennessee accumulated wealth, or he could have been sheltering family and friends.

If this were a typical slavery situation, where’s the cook? I guess it’s possible that Bryant had a very young cook, but it’s also possible that one of the free women was doing the cooking — which, again, is not the typical set-up for slavery.

In the 1850 slave schedule, Sherod had 22 slaves on his farm here in Davidson County. Twelve of them were under the age of 10. Another four of them were between the ages of 11 and 15. I’d like to be able to tell you definitively whether those four were expected to handle an adult workload or not, but we don’t know. What we do know is that, out of 22 slaves, Sherod only had six on his farm who we know could carry a full adult workload.

In 1850, his farm was worth $15,000, making it one of the most valuable farms in his area. So it’s useful to compare Sherod to his neighbor, James Anderson. Anderson was 60 years old and had a farm worth $40,000. He also owned 21 slaves. Ten were 16 or older. Three were between 11 and 15. Seven were young children. In comparison to his white neighbors, Sherod’s numbers seem skewed — too many young people for farm work.

Plus — and this is probably the biggest indication that whatever Sherod was doing with the institution of slavery, it wasn’t the usual thing — Sherod doesn’t discuss his slaves in his will at all. All his kids get named. All his property gets divvied up and debts forgiven. But there are no instructions for what should happen to his slaves — if they should be sold off or sent to the households of various children. His biggest financial assets and no mention of them? Very peculiar.

Another problem Bryant faced is that there were very few free families of color for his kids to marry into. His daughter, Catherine, married John Dungey. His son, Dallas, married Mary Dungey, who seems to be John’s sister. Sherod’s daughter Ailsey Bryant married Joseph Darr, and her step-daughter, Louisa, married Ailsey’s brother Lorenzo. If the Bryants were going to get married before the end of slavery, at least some of them had to have married enslaved people. And the surest way to protect those enslaved people was to legally own them.

The Bryant Town cemetery is large for a family cemetery. It’s nestled into the corner where Elm Hill Pike and I-40 intersect. The front of the cemetery is a large empty meadow, and there appear to be maybe a dozen, maybe 20 visible headstones either up on the hill or nestled along the tree line. There are a few Evanses, some Bryants, and some Hamiltons. There are also a few field stones that appear to have been tipped up and positioned as markers.

It’s once you get into the woods that you realize the scope of the place. There are formal and informal markers everywhere. Vinca blankets everything that’s not on the well-worn paths. Everywhere you look, there are dimples in the ground, like empty cradles waiting for you to come for your eternal rest, though they form because the person buried there and their wooden casket have turned to dirt and the grave has collapsed.

There are hundreds of marked graves here. Hundreds. Most of them don’t have names, but they are marked. It’s hard to guess, based on the hills and the lack of clear boundaries, but I would venture it’s about half the size of the city cemetery.

Sherod Bryant died in 1854 (or 1851, depending on your sources), and he’s buried in this cemetery, which is at the southern end of what would have been his land, if I’m reading things correctly. Even with as many enslaved people as he owned, as many children and grandchildren as he had, there are too many graves for this to be solely a family cemetery.

I also want to mention the devil’s bargain that the state has struck with sources like Ancestry. Many potentially very useful documents that the state owns were provided to Ancestry.com for scanning. Tennessee death records from 1908 to 1965 and Tennessee city death records from Nashville, Knoxville, Chattanooga and Memphis from 1848 to 1907 are sourced, according to Ancestry, from the Tennessee State Library and Archives.

On the one hand, this is amazing (if you have a subscription to Ancestry). If you have the name of your relative, you can search the death records and see where they’re buried. But if you’re trying to come up with a list of people — like, say, I want to know everyone who the state has records of being buried in Bryant Town Family Cemetery — it’s impossible through Ancestry’s interface, even though Ancestry clearly has that information. They’re just not set up to deliver it. And here’s the kicker: They didn’t share that data back with the state. I can’t call anyone at the Tennessee State Library and Archives and ask them to do a find for that information. All the TSLA has are the documents Ancestry scanned in.

I can’t begin to imagine what a game-changer it would be for historians and African American genealogists to be able to search those death records for particular cemeteries. You’d find potential family members you didn’t know about. You’d be able to see what families lived in an area. All the stuff you can do easily with Find-a-Grave for white cemeteries you’d be able to at least get a start with for Black cemeteries.

It would be nice if the state put some pressure on Ancestry to think creatively about the ways the data we gave them needs to be accessed in order to be useful — considering, you know, we gave them the data.