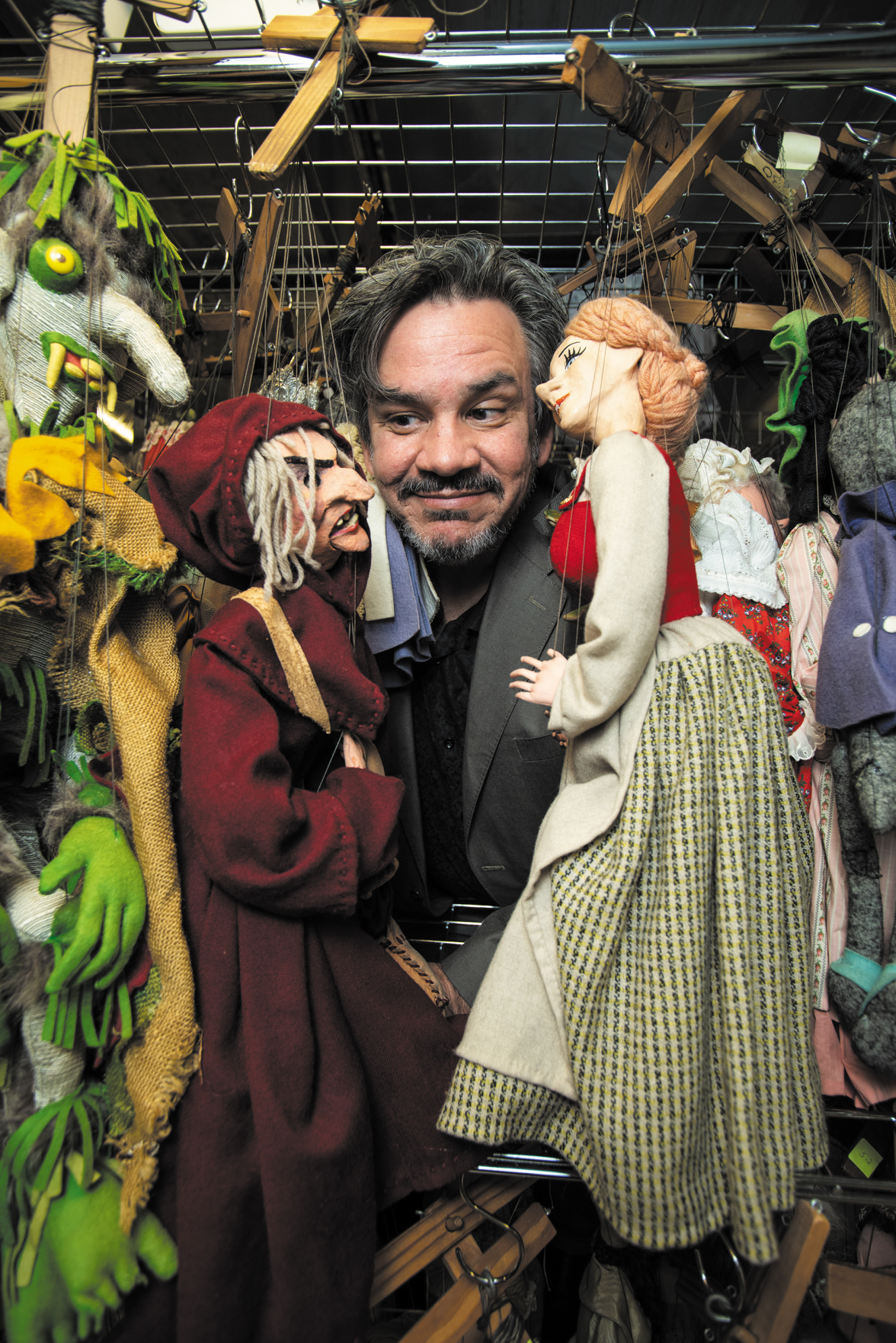 On Friday, Oct. 11, at 10:30 a.m., Brian Hull does what he’s done a few days each week for the past 21 years: He drives to the Nashville Public Library to put on a puppet show for children.

Outside the library’s children’s theater, a caravan of strollers reposes in an alcove. Inside, 40 or so kids fidget on the floor as their parents look on. After a brief introduction and a request to turn off cellphones, the room goes dark. The kids ooh and ah.

Hull has done hundreds of these shows — maybe thousands. But this one is atypical for a couple reasons. First, he’s debuting a new show called Lorraine, which is about a young African American girl, her grandfather and a dancing crow, set in rural Tennessee. It’s based on a children’s book written by musician Ketch Secor of Old Crow Medicine Show, with pictures by renowned illustrator Higgins Bond.

Over the next 20 minutes, Hull and another puppeteer make the marionettes dance and hop and frolic, and make Lorraine play her pennywhistle and “Pa Paw” his blues harp, all while Secor narrates and his band provides a rollicking string-band soundtrack. The kids eat it up.

But there’s also a more sobering reason why this show is different. On most days, Hull would end the 10:30 a.m. show, then immediately begin preparation for the second performance an hour later. But on this day, he needs to leave — he has to plan a memorial service for his wife.

Teresa “Reese” Faw, a longtime artists-and-repertoire representative at RCA, died in September after a 13-year fight with breast cancer.

“You know, it just kind of waves over you, the whole mourning thing,” Hull says. “It’s different than anything I’ve ever experienced. There’s no rhyme or reason to it. Nothing that specifically triggers it. It’s just suddenly an awareness comes to you.”

Hull and Faw met while auditioning for a TV show. He’d been doing theater, and he sang in an a cappella group in Washington, D.C. She had just made a brief appearance in The Toxic Avenger Part II, a cult comedy featuring an antihero who develops superpowers after falling into a vat of toxic waste. “She played an environmentalist who gets run over by a steamroller,” Hull says.

Before the two met, a mutual friend had tried to set them up on a blind date, but mistakenly told Faw the wrong day. When she heard Hull’s name at the audition, she recognized it as her missed date. “They said, ‘Bryan Hull, you’re next.’ Then she walks right over to me. She says, ‘Are you Brian Hull?’ I say yes. She says, ‘What are you doing after this?’ ” They married in 1991.

When Hull talks about his wife, his eyes well and his voice cracks. It feels mistimed to interview a man who’s spent his life dispensing joy at a time when he’s experiencing such profound grief. But Hull is no sad-clown cliché. When I learned about his wife’s death, I offered to postpone our interview for a few weeks. He insisted on proceeding as planned.

“I don’t remember the bad stuff, the hard times when she was sick,” he says. “I try to live in the present. I look at the amazing life I’ve had, how incredibly lucky I was to have her. I look at my two kids, my brilliant and wonderful kids, and I see her — that’s her. That’s all her. She did that.”

Hull was born and raised in New Oxford, Penn., near Amish country, where his parents owned a farm and an auto-parts store. As a kid, he drew, sang and did theater, and hoped to one day be a Broadway actor or an animator for Disney. He was singing at a church when he was discovered by an opera voice coach named Forrest Barrett. He gave Hull free voice lessons, and after college, Barrett convinced him to move to Washington, D.C., to sing in an a cappella quartet. Richard Trexell, who would go on to be a star tenor in the opera world, was also part of the group. “We sang like, 16th-century madrigal songs, really crazy stuff,” says Hull. “It was quite an adventure.”

In 1985, Hull left opera for Opry, when the Opryland company cast him in a new production: the General Jackson riverboat show. A few years later, the Opryland theme park was looking to implement some programming for children, and Hull volunteered. “I had all these circus-y skills,” he says. “I juggle, I sing and draw. So I fashioned a kids’ show out of that.” After some fits and starts, Hull adopted a persona called The Professor, and the show took off. “We eventually had our own section in the park,” he says. “There were T-shirts. My face was on fudge.” The act spun off a TV show, for which Hull won two regional Emmys.

Hull recalls the interaction that made him realize he’d found his calling. “It was like the third of July, and I’m walking through the park in this professor’s wig. It’s like 103 degrees, and the heat is just killing me. I was thinking, what am I doing? I should be doing real theater, you know?”

Later that day, two boys walked up, and one grabbed Hull by the leg. “The older kid says, ‘Do you remember him? He was at Vanderbilt Children’s Hospital.’ “ Hull sometimes put on shows at the hospital. “They didn’t think he was gonna make it. And the older kid says, ‘He doesn’t remember anything about that place except that you were there.’ ”

On the younger boy’s fourth birthday, his parents asked what he wanted. “He said, ‘I want to see The Professor,’ ” Hull says. “I mean, holy smokes. How could I do anything else?”

After the theme park closed, Hull brought The Professor to the Nashville Public Library, which is where he took up puppetry.

Nashville, it turns out, has a bit of history with puppetry. Tom Tichenor, a legend in puppetry circles, started putting on shows for the Nashville Public Library in 1938, at age 15. He’d later go on to oversee the puppetry in the Broadway musical Carnival! Over the course of 50 years, when he wasn’t involved in Broadway plays or appearing on TV shows like NBC’s Perry Como’s Kraft Music Hall, Tichenor was back in Nashville putting on shows for children at the library.

Hull inherited Tichenor’s marionettes, and he’s been the city’s master of puppetry ever since. Today he oversees a staff of 10, and estimates he has created around 25 shows for the library. He does the daily story time as well as the puppet shows, and he runs two trucks that take his shows all over Davidson County. He also writes and directs children’s shows for Dollywood, and has written shows for the Nashville Ballet. A few times each year, he puts on an elaborate, hourlong, 100-puppet history of country music called String City, in collaboration with the Country Music Hall of Fame and Museum. He recently played a political pundit with Ed Asner when Asner’s play God Help Us! came to Franklin.

The show Hull is most proud of is a multimedia production called Kaytek the Wizard. It’s an adaptation of a children’s book by Janusz Korczak, a Polish physician and advocate for children’s rights in the early 20th century. Hull found the book in a stack at the library. “It was like no other kids’ book that I’ve read,” he says. “It’s more a collection of stories. Korczak worked with troubled children and wrote his stories based on his interactions with them. So the stories were based on real experience, and designed to help other troubled children.”

But Hull was especially moved when he began to read about the author. “Korczak had set up an orphanage for Jewish children in Warsaw,” Hull says. “When the Nazis invaded and moved the children to a ghetto, he went with them. Then they sent them to Treblinka,” a Nazi death camp.

Korczak was offered sanctuary by German authorities, by the underground resistance, and according to some reports, even by a Nazi guard whose kids loved Korczak’s books. “Three times, he was offered sanctuary,” Hull says. “He refused every time. He stayed with the children.” Korczak is believed to have died in the Treblinka gas chamber.

As Hull and I chat at Saigon Cafe on Charlotte Pike, a family beside us finishes their meal and gets up to leave. The mother does a double-take at Hull and lights up. “You used to do the puppet shows at the library!” she says.

“I still do,” Hull replies.

“That’s puppetry,” Hull says, smiling. “I’m always so amazed. It has such an effect on people.”

Hull says this happens a lot. He’s 57, but his dark hair has only just begun to gray. He looks like a younger, slimmer Oliver Platt, and is still boyish-looking enough to be recognized by someone who saw him perform a decade or more ago.

As the family leaves, Hull looks down. He sits silently for a few seconds, as if perhaps that family has made him think of his own, and another wave of grief has passed over him.

He snaps back into the present. “I’m the lucky one,” he says. “Even though I have a wife who died of cancer at a young age, I’m the lucky one. I mean, look at what I get to do every day. Are you kidding me? What, am I going to go and try to sell something?”

He recounts a story that he says reminds him how lucky he is. He was taking his shows on a tour of Europe. “We were in Normandy, and after the show, this little girl starts talking to me in French,” says Hull. “Well, I didn’t speak much French, and she didn’t speak English, so her teacher was interpreting. But as she was interpreting, this teacher was giddy — just exuberant. I didn’t understand why.”

Other puppeteers have told him similar stories about autistic children. “There’s just something about the puppets that connects with kids. There’s a phrase that goes, Actors act, but puppets are. Puppets are pure.”

The secret to connecting with kids is simple, Hull says. “Just respect them. You know, not long ago I got an email from this kid Brandon, who’s probably now in his 30s. When he was 3 or 4, he was a regular at our show in Opryland. He was our toughest critic. After every show, he’d give us a thumbs up or thumbs down. Or when he was really mad, a thumbs down with crying! In his email, he apologized to me for all of that. Which was touching. But you know what? He was usually right! If you treat kids like people — listen to them, don’t condescend to them, don’t talk down to them — you’ll reach them, and it’s so incredible.”

Hull will be leaving Nashville for a while. He’s been cast in a Dolly Parton-written adaptation of A Christmas Carol, set in the 1930s in the Smoky Mountains. The show will be performed at the Emerson Colonial Theater in Boston. “I’m really excited,” he says. “It’s just a gorgeous production.”

I ask Hull what character he’ll be playing.

“The Ghost of Christmas Present. That’s always been my favorite character.”