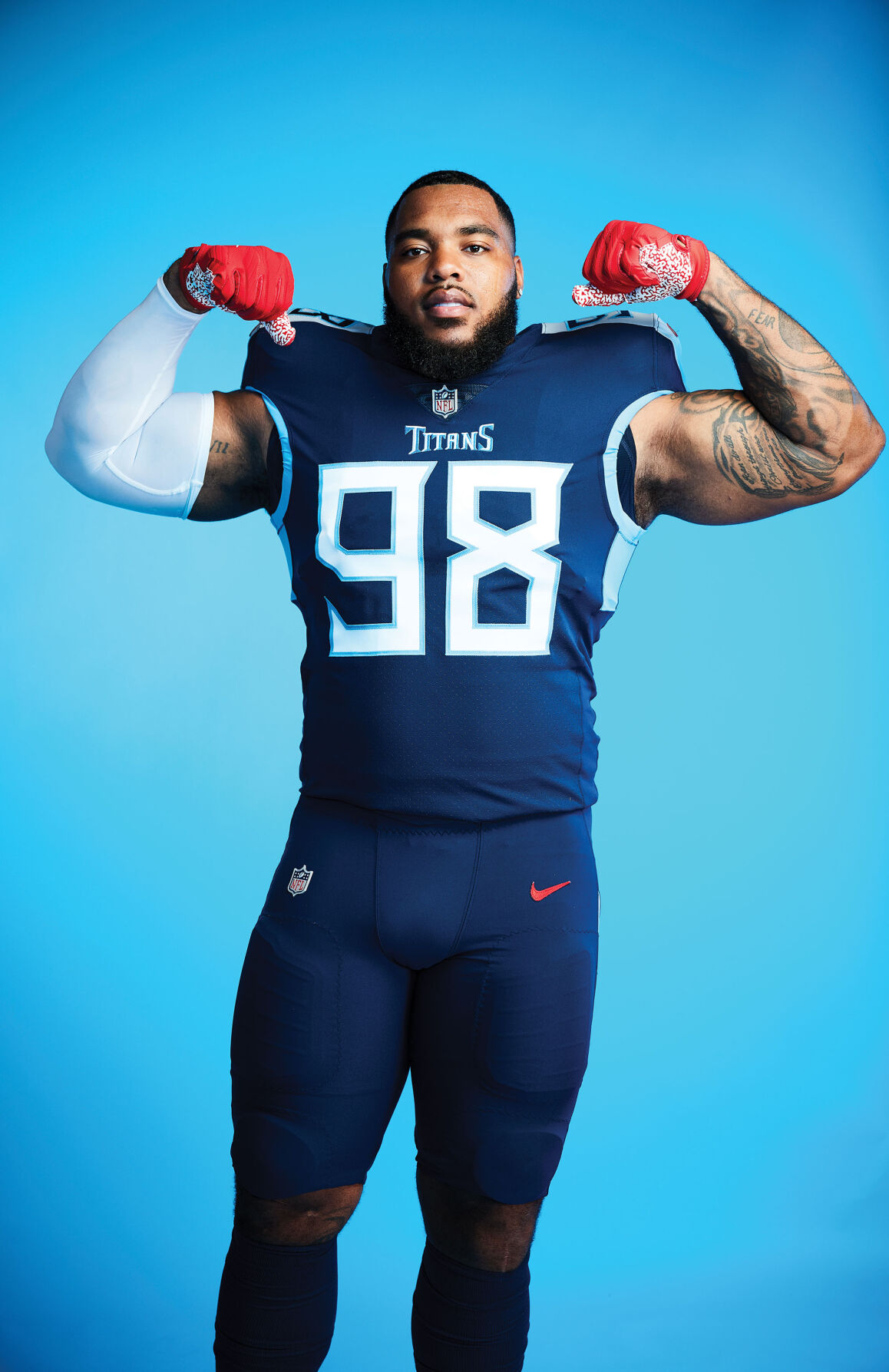 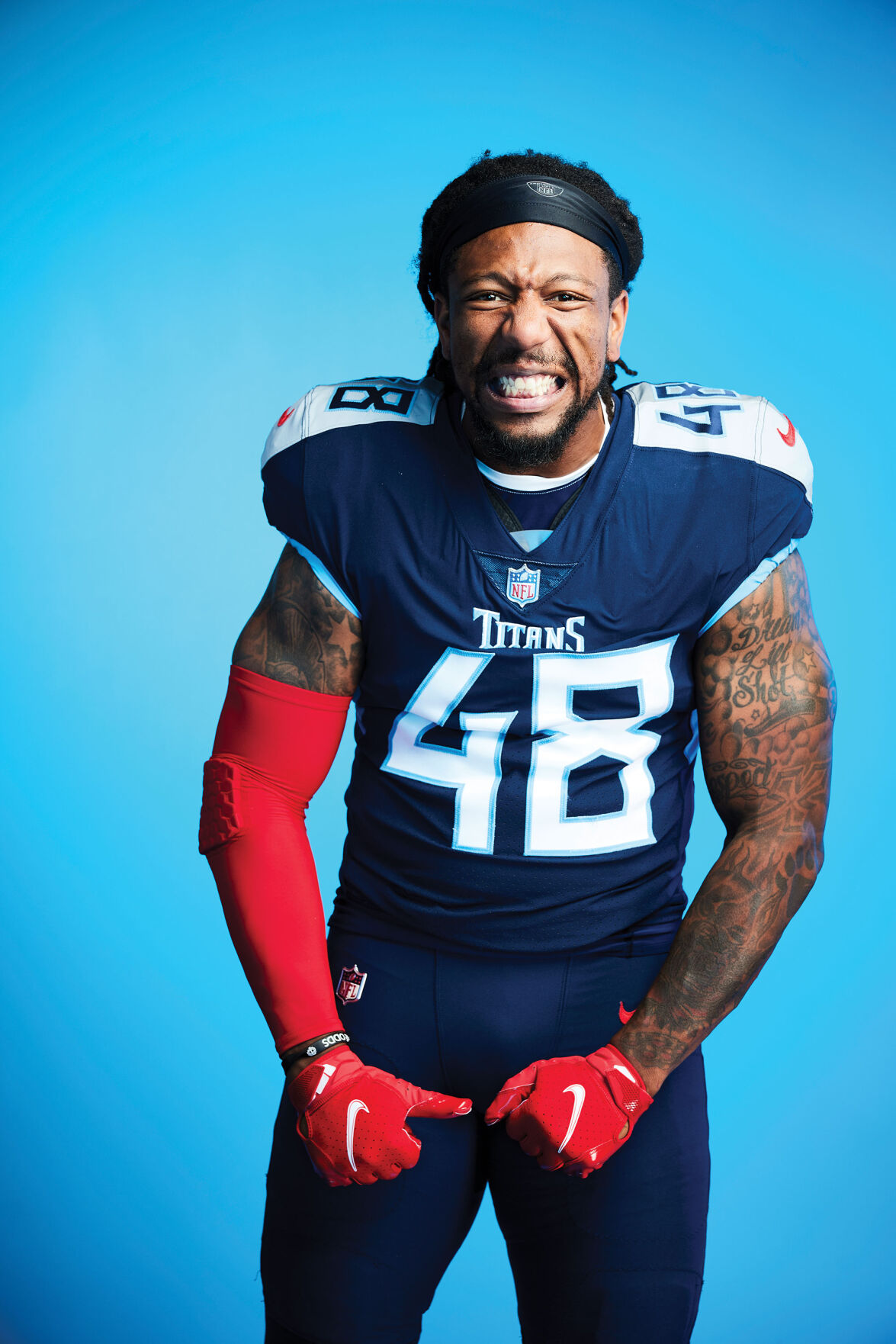 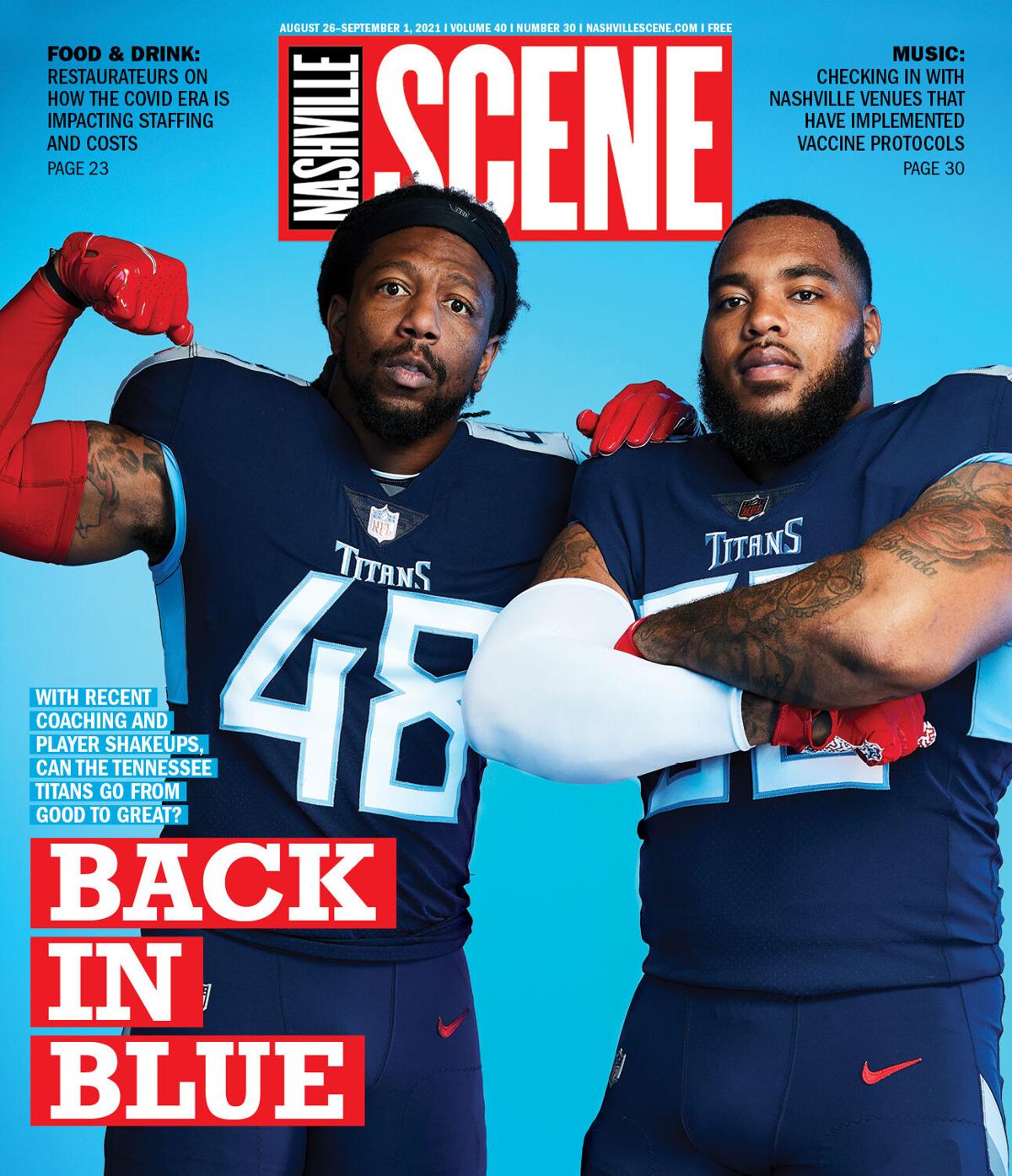 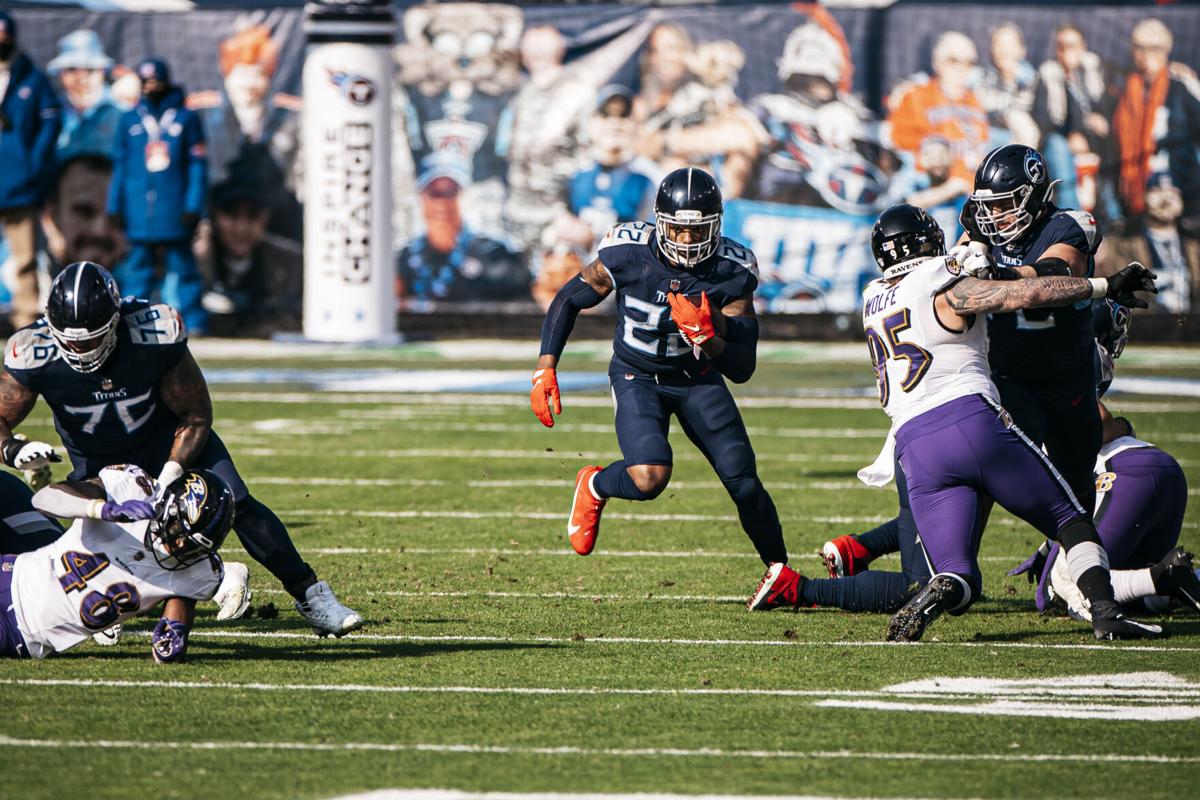 Running back Derrick Henry during the game between the Tennessee Titans and the Baltimore Ravens at Nissan Stadium.

This article is part of a two-story cover package on the Tennessee Titans' upcoming season. See also: "After Coaching Shakeups, Will the Titans Improve This Season?"

In a typical year, boasting the No. 2-ranked offense in the NFL, an 11-5 record and winning their first AFC South division title since 2008 would be reason for rejoicing for the Tennessee Titans.

But 2020 was anything but a typical year.

This season, the Titans carry over most of the pieces from their record-breaking offense a year ago. New offensive coordinator Todd Downing was promptly handed the keys to a shiny new car in the form of a passing offense that added seven-time Pro Bowl receiver Julio Jones. With a fistful of playmakers that also includes Ryan Tannehill, Derrick Henry, A.J. Brown and Josh Reynolds, good luck to opposing defenses trying to keep the Titans under 30 points per game.

As good as the offense is, the defense very much remains a question mark. The 2020 Titans had the worst third-down defense in NFL history and the 30th-ranked red-zone defense in the league. Simply put: The Titans defense couldn’t stop teams from moving the ball or scoring inside the 20.

While the Titans still have some questions that need to be answered, the team is the projected favorite to win the AFC South and potentially make a deep playoff run. Tennessee’s success in 2021 will be contingent on many things, including how well the overhauled team gels.

Below are some under-the-radar Titans players to keep an eye on in 2021.

Perhaps nothing has divided Titans media more during training camp than the debate of whether Anthony Firkser is a legitimate starting NFL tight end. The 26-year-old has never started more than a single game or had more than 39 receptions in his three-year career. However, Firkser is arguably the Titans’ best possession tight end over the past two decades. He didn’t drop a single catchable target in 2020, according to Pro Football Focus, and since 1998, only Jonnu Smith in 2018 had 35 or more receptions with a higher catch percentage than Firkser’s 73.6 percent last season. He should fill in nicely as Ryan Tannehill’s security blanket.

Is Firkser really a TE1? At this point in his career, no. Is he highly underestimated? Absolutely.

The left side is the unquestioned strength of the Titans’ offensive line. But at the rate Nate Davis is developing, that may no longer be true.

In just his second NFL season, Davis was the 13th-best run-blocking guard in the league, according to Pro Football Focus, and he even earned a first-team All-Pro vote. Of the 1,074 snaps he played, Davis allowed just one sack. If he keeps on his current trajectory, he could be a Pro Bowler by the end of his third season. The next step for him is to develop his pass-blocking skills. If he improves there, he could be talked about as one of the elite guards in the NFL.

“He’s taken really big strides,” says Titans offensive line coach Keith Carter. “Every year in the NFL, he’s become a better pro. I’m talking preparation, offseason routine — he’s figuring things out. The next step comes down to consistency. The best pros are able to be good on a consistent basis.”

OK, so maybe Jeffery Simmons isn’t under the radar, but a lot of eyes will be on him this year. It’s difficult to find a Titans player whose stock rose more during the offseason than his. First, NFL.com named the 23-year-old defensive tackle to its All-Under-25 Team. Then an anonymous general manager told ESPN that Simmons was “the closest thing to Aaron Donald,” and another league executive told ESPN that Simmons is one of the top three defensive tackles in the NFL right now. And all of this was before the third-year player dropped another 10 pounds to help boost his burst off the line of scrimmage.

It’s crazy to think a year removed from leading the NFL in run-stop win rate as a defensive tackle and registering 21 quarterback pressures, 14 QB hits, 11 QB knockdowns, five pass breakups, three sacks, three fumble recoveries and a forced fumble, that Simmons is only scratching the surface of his potential. It could be argued that the 2021 Titans defense can go as far as Simmons takes them.

Bud Dupree was brought to Tennessee for one reason: to fix the pass rush. While it may be unfair to place that kind of pressure on just one player, he’s getting paid $82.5 million to do so, so I’ll direct my sympathies elsewhere.

While he’s been limited during training camp with his ACL recovery, eventually Dupree will take the field in a live-action game, and he won’t get a free pass if he puts up Jadeveon Clowney-esque numbers.

“You never want to be on the sideline,” says Dupree. “But with a situation like I’m in, it’s just something that takes time. … So now it’s just a waiting game. I’m going to be ready whenever they call me. If they tell me to go out tomorrow, I can go do it.”

Rashad Weaver had his coming-out party in Tennessee’s Week 1 preseason win over the Atlanta Falcons. He showcased speed, athleticism, strength and sheer dominance, finding his way into the backfield with ease, albeit against Atlanta’s backups.

Pending the outcome of an assault charge Weaver will go to court for Oct. 5 in Pittsburgh, the 23-year-old could be on the fast track to being Tennessee’s No. 3 outside linebacker behind Dupree and Harold Landry. Given the Titans’ 19 sacks in 2020, a player with the pass-rush potential of Weaver could become a permanent fixture in the Titans’ front seven.

If there’s one player from last year’s rookie class that will benefit more than any other from having a normal training camp and preseason this year, it’s Kristian Fulton. The 22-year-old corner has been a pass-breakup machine in practice and during the Titans’ preseason opener against the Atlanta Falcons. Fulton appears to have tightened up his man-to-man coverage skills, and the Titans have the luxury of moving him inside or outside.

Injuries and COVID limited him to just six games during his rookie year, where he totaled 16 tackles, an interception and a pass breakup. However, having a clearly defined role — the Titans expect Fulton to be a starting cornerback — has cut out the white noise and clearly defined his expectations.

Says Fulton: “That’s the main thing for me heading into Year 2, being able to find a role in the defense. … I am preparing to be a starter, at whatever role that may be — at corner, nickel or special teams. I just want to show them that I have been working for that and trying to get healthy and show them that I know what I am doing out there.”

Cutting a veteran the caliber of Kenny Vaccaro is no easy pill to swallow, but it’s a move that’s completely justified if you have a younger, faster and perhaps a higher-ceiling player waiting in the wings like Tennessee does. Amani Hooker showed glimpses throughout the 2020 season that he’s more than capable of filling Vaccaro’s shoes. He led the Titans with four interceptions in 2020, and at times looked to be the team’s best safety. Quarterbacks had a lower passer rating when targeting Hooker than Vaccaro (83.2 to 115.7), and Hooker allowed fewer yards after the catch than Vaccaro did (114 to 188) as well.

Robinson told reporters after drafting Hooker in 2019 that he did so based solely on his versatility in base defense and sub packages. As the unquestioned starter at free safety, that versatility may be fully unlocked in 2021.

“Hooker showed up in a few different coverages making some plays,” says defensive coordinator Shane Bowen. “He has been savvy back there. He has always been a smart football player. I think he is starting to learn the ins and outs of playing the game.”

After Coaching Shakeups, Will the Titans Improve This Season?