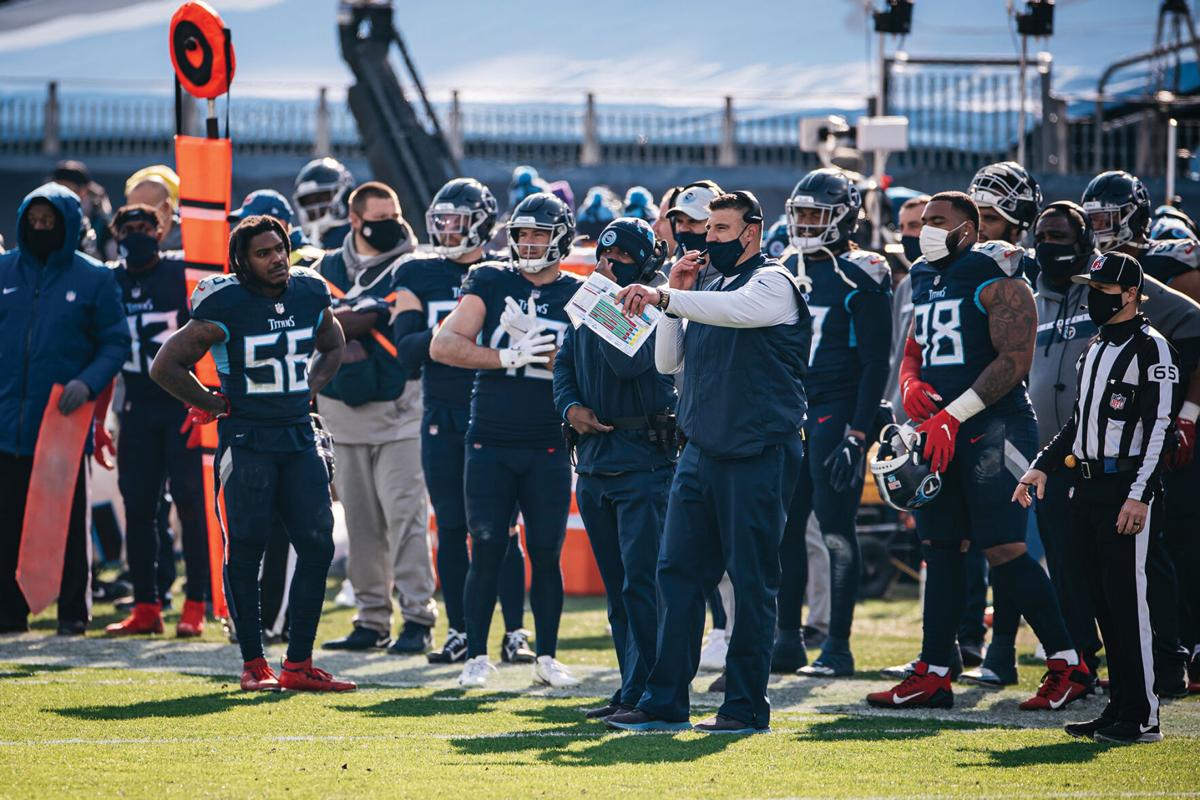 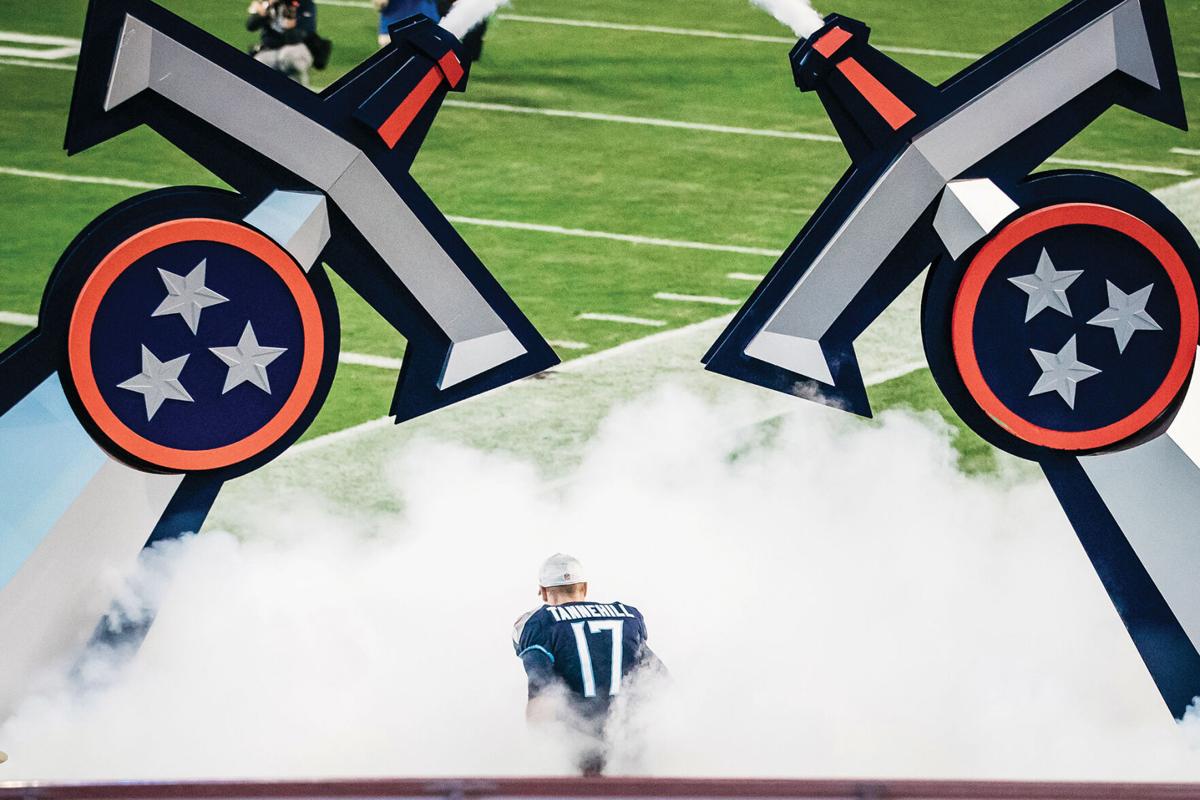 This article is part of a two-story cover package on the Tennessee Titans. See also: "Under-the-Radar Titans to Keep an Eye on This Season."

It was bound to happen eventually.

For the better part of two years, Tennessee Titans fans watched the annual National Football League coaching carousel through their fingers. Young, innovative and successful coordinators don’t stay coordinators forever — not anymore. Gone are the days of, say, Dick LeBeau calling zone blitzes for the Pittsburgh Steelers for a decade. If a coordinator shows promise, his lifespan as an assistant is three, four years tops. Someone is going to give him a shot at a head-coaching job. It’s a “when,” not an “if” proposition.

After scheming the Titans to their highest-scoring season in 16 years in 2019 — capped with widely lauded game plans leading to road upset wins in the playoffs over the New England Patriots, putting paid to the 21st century’s most enduring pro sports dynasty, and the AFC’s top-seeded Baltimore Ravens — the “when” seemed even more imminent for offensive coordinator Arthur Smith.

With only one season as Titans coach Mike Vrabel’s offensive guru under his belt, Smith came back to the Two-Toners in 2020. And as an encore to the shock of 2019, all he did was build an offense that produced a 2,000-yard rusher in Derrick Henry. That’s remarkable enough on its own, but it’s even more impressive given the fact that quarterback Ryan Tannehill threw for more than 3,800 yards and 33 touchdowns on top of Henry’s epic performance on the ground.

If the writing was on the wall for Smith and the Titans after 2019, a giant neon sign and those flailing inflatable tube men were there after 2020.

Sure enough, five days after the Ravens knocked the Titans out of the playoffs, the Atlanta Falcons made Smith their 14th coach in team history.

It was a tough but expected loss. Nevertheless, fans hoped Vrabel would seize the opportunity to bring in a flashy name — perhaps someone with a reputation for implementing a more dynamic, more vertical passing game to take advantage of the flashy potential of receiver A.J. Brown as a complement to the generational combination of speed, size and toughness Henry brings. Instead, Vrabel followed his usual playbook: He promoted from within, elevating tight ends coach Todd Downing to offensive coordinator. Interestingly enough, that’s the same promotion — tight ends coach to coordinator — Vrabel gave Smith in 2019.

No one can expect Downing to replicate the first-year jump the offense made in Smith’s debut season. After all, the Titans ranked at or near the top of nearly every offensive category in 2020. (That is, except for pass attempts and yardage, coming in 30th and 23rd, respectively; nevertheless, the team ranked eighth in passing touchdowns.) There’s generally little room for improvement.

If Downing does have first-year jitters, surely they were calmed slightly when general manager Jon Robinson traded a second-round pick to the Falcons for wide receiver Julio Jones, a man on any reputable list of the best pass-catchers of all time.

If defenses had trouble scheming against the Titans last year (Sell out to stop Henry and risk opening up things downfield for Brown and company? Or drop back to stop the pass and give Henry fewer bodies to crash through on his way to 90-yard touchdown?), they may be in therapy by the time this season starts. Not only will opposing defensive coordinators have to choose between stopping the run or defending the pass, now they have to decide if they double-team Brown or the future Hall of Famer lined up on the other side of the formation. Oh, and let’s not forget Tannehill is one of the most effective quarterbacks in the league with the play-action pass and running the bootleg.

Downing’s offense should also get a boost with the return of All-Pro left tackle Taylor Lewan, who missed the bulk of 2020 after tearing his ACL in Week 6. Stability on the offensive line will be critical, both for Henry’s quest for a third straight NFL rushing title and if the Titans intend to stretch the field vertically.

Two Titans parlayed career years into big contracts elsewhere. Receiver Corey Davis finally showed the promise that made him the fifth overall pick in 2015 and signed a three-year, $37.5 million deal with the New York Jets. Julio Jones is, to put it mildly, a more than capable replacement there.

More concerning for Downing is the loss of tight end Jonnu Smith, whose career year earned him a four-year, $50 million contract with New England. After a few years as Delanie Walker’s understudy, Smith turned himself into a premier tight end with the right mix of size, blocking ability, pass-catching prowess and speed. (Indeed, he actually holds the NFL record for longest rush by a tight end, a record that feels extremely Titan-y.)

Short of an addition made under the wire before the regular season starts on Sept. 12, Smith’s place in the lineup will be filled by Anthony Firkser (the media is legally obligated to mention that Firsker went to Harvard), a sure-handed pass catcher with a knack for first downs. He lacks the upfield speed of Smith, which may limit Downing from using some of the more exotic route trees his predecessor employed. But then, his predecessor didn’t have Julio Jones.

Defensive sage Dean Pees retired after the 2019 season (he found retirement boring and will be Smith’s defensive coordinator in Atlanta this season) and Vrabel — who was the defensive coordinator in Houston before taking the Titans’ top job — opted not to replace him. He brought in veteran NFL coach Jim Haslett to coach inside linebackers, though that seemed like an obvious sinecure from the beginning, given Haslett’s extensive experience as a DC and indeed a head coach. The conventional wisdom was that Haslett would call the defensive plays, a de facto coordinator. And of course, Vrabel could call plays, as he did for the Texans.

Who among the defensive staff would be ultimately responsible for making those decisions remained an open question throughout the 2020 preseason before Vrabel said the duty would fall on outside linebackers coach Shane Bowen.

After the abysmal performance by the Titans defense in 2020, Vrabel (and Bowen) may have wished they’d kept it a secret all year.

Conversely from what the offense was able to accomplish, the Titans defense ranked near the bottom in nearly every category. (The team was in the top 10 in takeaways.) Fans learned that getting excited about forcing opposing offenses into third downs was a lost cause.

The Titans defense was without a coordinator and completely uncoordinated in football’s most crucial down. Offenses converted nearly 52 percent of third downs against Tennessee in 2020.

Winning covers up a lot of mistakes, and despite their atrocious play on third down, the Titans did plenty of winning — but being able to get teams to punt was going to be a top priority heading into the offseason.

Robinson did his part, using his first-round draft pick on cornerback Caleb Farley and adding corner Janoris Jenkins and edge pass rusher Bud Dupree in free agency, among others. In the first preseason game against Atlanta, though, it was fourth-round pick Rashad Weaver, an outside linebacker out of Pittsburgh, who starred. Though the team was playing against backups, the overall performance from the Titans defense in the exhibition game does give reason for hope that they can take a big step forward in 2021 (because there’s not much room to go backward).

And this year, it’ll all be on Bowen, who Vrabel promoted to defensive coordinator despite his unit’s historically bad season last year. It was a head-scratcher of a decision, even if it did come from the intensely loyal Vrabel, who has repeatedly shown he’ll promote from within if at all possible.

The problem, of course, was that Vrabel had an easy out: He didn’t need to fire Bowen. He didn’t even have to demote him. He could have just said his job — outside linebackers coach — is his only job. Instead, he officially gave him the job he had in all but name last season. And gave him the title.

And there were options. Notably, there was Pees, who made it clear before the 2020 season was over that his retirement would be a short-lived one. Fans and media alike clamored for the Titans to bring the wizard back. Alas.

Play-calling stability with a few new toys to mess around with is a positive for the offense. For the defense, though, staying the course seemed to be the last thing the Titans should do after a year with a blasé blitz, formulaic coverages and unremarkable outcomes.

Early returns were positive, of course, against the Falcons and the Bucs (backups). But for Vrabel — and Bowen — to be vindicated, the Titans defense will have to show the one thing they never showed last season: improvement. The problems that were evident in Week 1 were the same ones they had in the playoffs.

Can a unit that’s improved on paper do enough to take the Titans from good to great? Or will Tennessee have to hope their great offense gets greater?

Under-the-Radar Titans to Keep an Eye on This Season

We all know about Henry, Jones and Brown — but here are some lesser-known players to watch