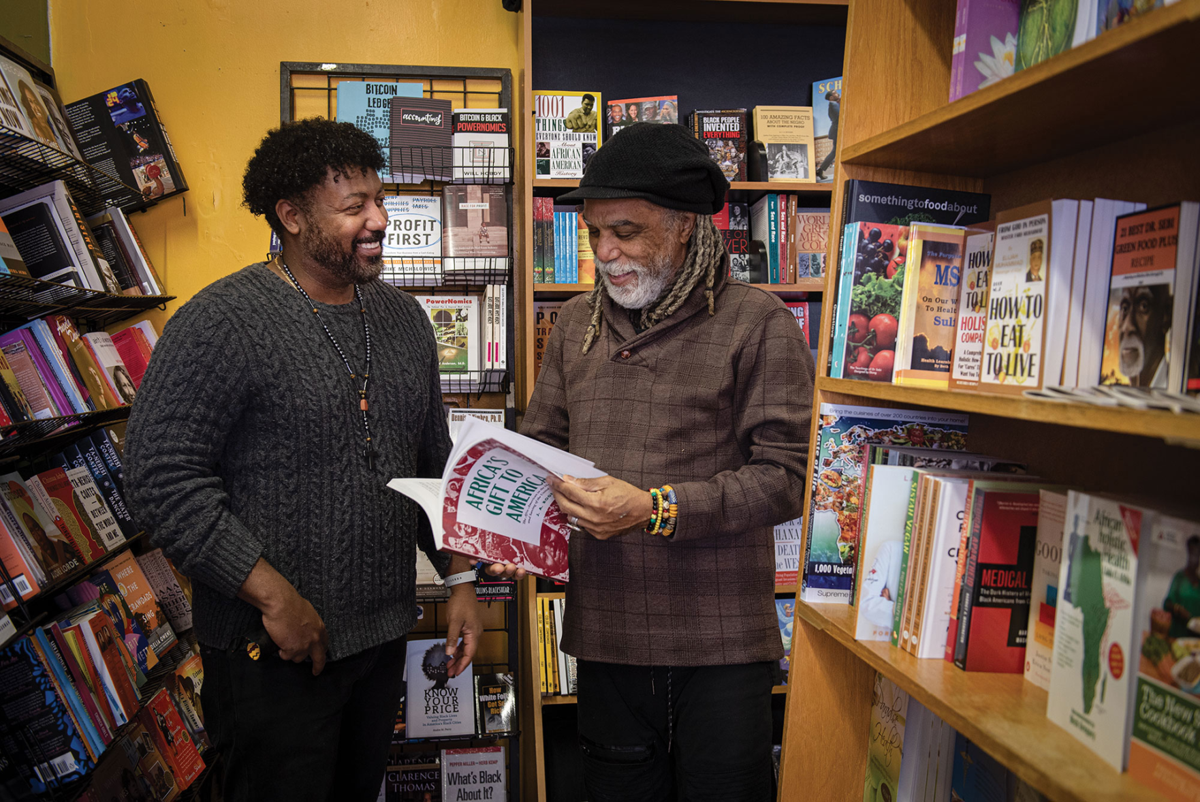 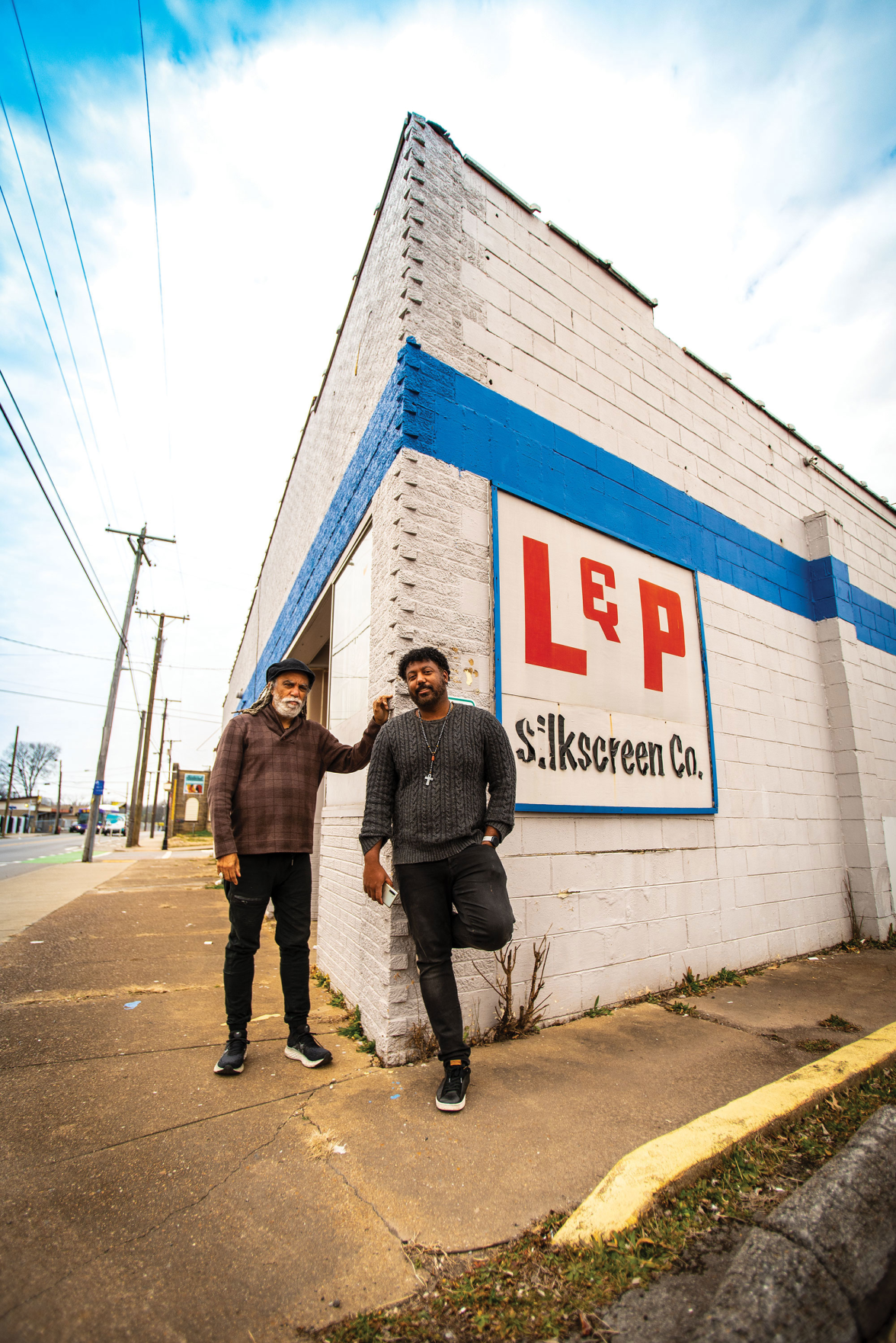 When I read that the owner of Alkebu-Lan Images bookstore had purchased the T-shirt building on Buchanan Street in December, I felt like I had hit the lottery. “Thank you, Lord,” I whispered. “We got one.”

As investors continue to buy property along predominately Black Buchanan Street, almost every transaction turns people who look like me into renters. Investors buy land from Black people, then turn around and rent it to other Black people.

But this was different.

The father-son duo at Alkebu-Lan was purchasing from the father-daughter duo at L&P Silkscreen — the Perez family had run their T-shirt business out of the building since 1976. And despite the lawsuits and overall wretchedness of 2020, Black people would own land on Buchanan for the foreseeable future.

There is a closeness between father Yusef and son Jordan Harris that I can sense through the computer screen. They don’t interrupt each other. Each leans in to listen when the other is speaking.

The younger Harris followed his father’s path to Morehouse College, then worked as an investment banker in Hong Kong and London. After the loss of two family members, the pair traveled to Tanzania to climb Mount Kilimanjaro. Seeking a deeper sense of purpose, Jordan returned to Nashville in 2018 to help his father modernize operations at Alkebu-Lan.

“While overseas, I kept comparing my job to my dad’s business,” Jordan says. “The sense of purpose and ownership. I realized, I couldn’t achieve the things I wanted in banking.”

Jordan says his father is probably underappreciated. Since starting Alkebu-Lan in 1986, Yusef has mentored and advised hundreds of Black business owners.

On any given Friday, a pop-up tent can be spotted in Alkebu-Lan’s parking lot. Some might see it as nothing but knockoff handbags, shoes and competition. But the Harrises see it as proof that the neighborhood is fostering the growth of other businesses. Alkebu-Lan distributes products from 10 local vendors and plans to expand.

“If we sold everything people ask for, you couldn’t walk around,” says Jordan.

Every countertop, shelf and surface in Alkebu-Lan is covered with art, information and products reflecting and celebrating African culture. As a doctoral candidate studying psychology at Vanderbilt and teaching at TSU, Yusef knew Black people needed to see images of themselves that were uplifting. He saw a path to do that through books. While living in London, Jordan recognized an appreciation of Black culture and opened a restaurant with a friend. The restaurant was so successful it led to a partnership with British Airways. But ultimately, the restaurant closed due to rising rent. It’s the kind of story we see frequently across Nashville.

“As neighborhoods change, rents rise and businesses have to perform better in order to pay their landlord,” says Jordan. His father nods in agreement, going on to credit the ownership of land with the longevity of Alkebu-Lan.

“If you are going to be brick-and-mortar, you have to be able to control your land,” says the elder Harris. This principle has allowed Alkebu-Lan to define success outside of capitalism and cultivate an environment to help other businesses grow.

I tried and tried to reach the Perez family. Life in North Nashville is not for the faint of heart, and there is so much I wanted to learn from them. I had dozens of questions. What was their favorite memory of Buchanan? What was it like working together? Fewer than 50 percent of small businesses make it past the five-year mark. How did L&P Silkscreen make it to 47 years?

I met Mr. Perez once. I tried ordering T-shirts, but he told me to come back when his daughter was at the store. He reminded me of my husband’s Nicaraguan grandfather. Despite his silver hair and smile wrinkles, I could tell the decades of working the screen pallets had kept him strong. He definitely would have beaten me at arm wrestling if I’d challenged him.

Since the Perez family was unavailable, I collected stories from half a dozen of their longtime neighbors.

In 1976, the street was in decline. What had once been a bustling Black, white and Jewish business district was suffering from municipal neglect, white flight and the completion of Interstate 40, which displaced hundreds of Black residents and businesses.

Trash wasn’t getting picked up. Grass was overgrown, and businesses were closing. The all-white school, North High, closed — there were whispers of turning it into a juvenile detention facility, but that ultimately didn’t come to pass.

Before the interstate, you could call a Black-owned funeral home if you needed a ride to the doctor or hospital. Children walked miles to swim at Hadley Park or the Eldorado Motel without fear of harm. And Black-owned businesses — dry cleaners, juke joints, record stores and restaurants — thrived with the support of the surrounding community.

But all that was lost.

In the decades since, North Nashvillians have learned to navigate the dualities of a system built to break us. I’ve heard the thud of a bouncing basketball mixed with the laughter of children, minutes after a drive-by shooting. We hold onto joy.

Amid the overdoses, broken promises and school closures, we braid our hair. We have cookouts. We go to work. Dance to Frankie Beverly and Maze. Wash our cars, and love our children.

Against all odds, we persist.

I guess that’s why Alkebu-Lan’s expansion feels like a triumph. The neighborhood is changing, and I worried that North Nashville wouldn’t be inclusive. But Mr. Yusef or Jordan won’t call the police when they see my son riding his bike down Buchanan. They’ll invite him inside for storytelling.

Alkebu-Lan is not just for Black people. It’s for everyone who wants to learn about Black culture. And in 2020, people did that en masse. So much so that the Harris family began looking to lease a warehouse, and this opportunity to buy presented itself.

Mr. Perez retired at the end of 2020. In April, Alkebu-Lan will mark 35 years in existence. But these two families have built much more than successful businesses. They, like hundreds of North Nashville families, are building a legacy.