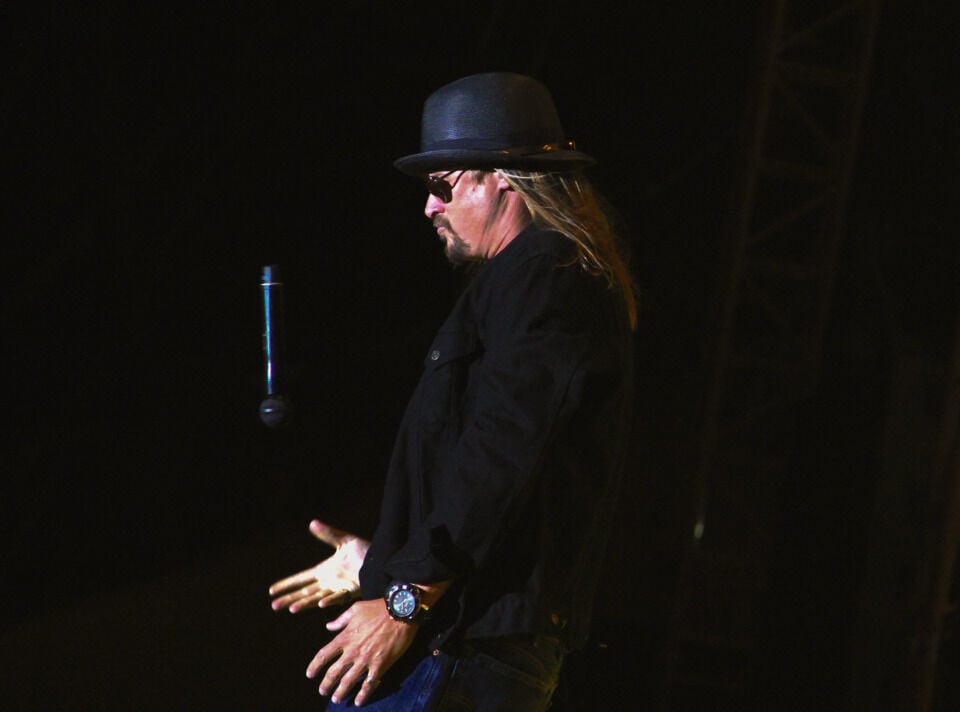 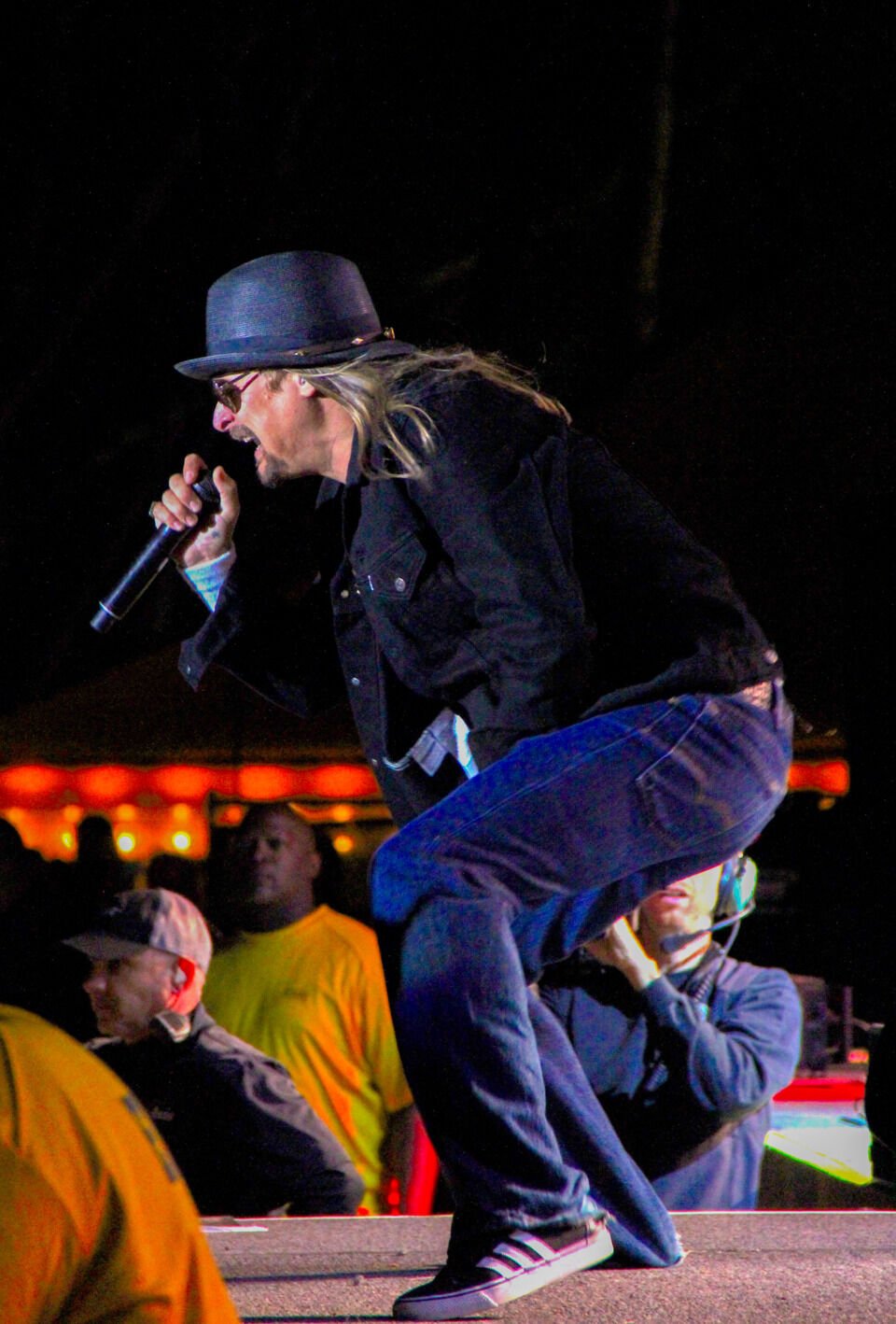 Kid Rock at Fontanel in 2016 by Weston Sparks 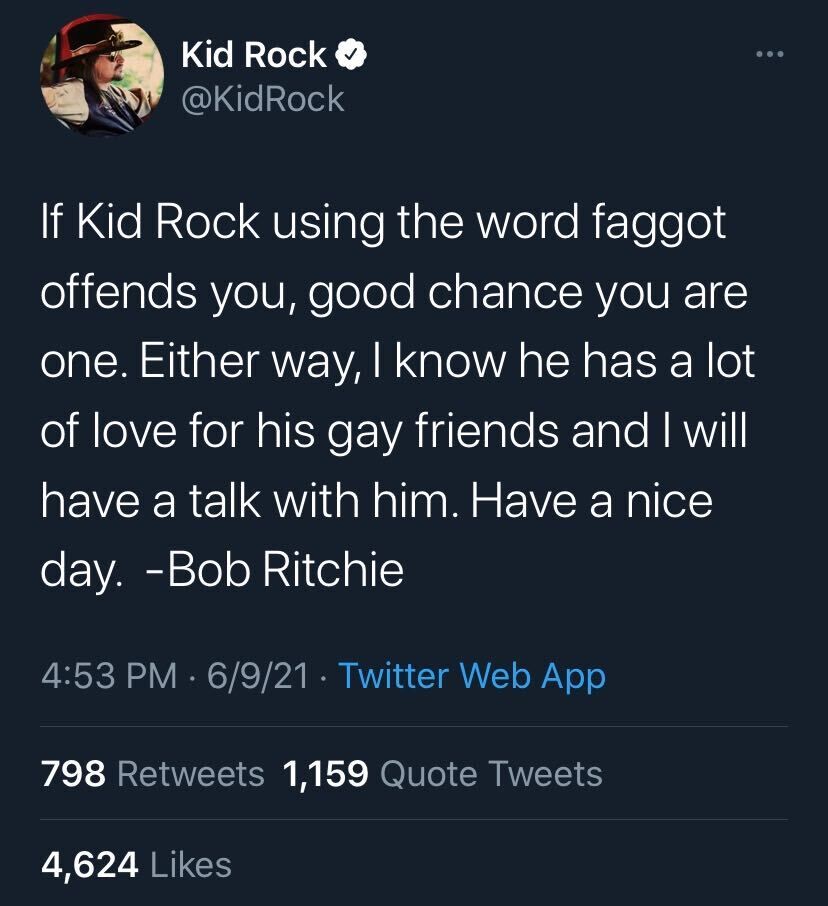 Kid Rock at Fontanel in 2016 by Weston Sparks

I don’t think anyone should be surprised at this point. Kid Rock — the rap-rock performer, Nashville transplant and Kid Rock’s Big Ass Honky Tonk & Rock N’ Roll Steakhouse proprietor born Bob Ritchie in middle-class Michigan — is making headlines for using a homophobic slur. You know the one. It starts with an F and is a longtime favorite of bigoted bullies and very stupid people everywhere.

As reported by TMZ, Rock used the epithet onstage at FishLipz Bar & Grill in Smithville, Tenn., just a few days ago. Wednesday afternoon on Twitter, he doubled down with a non-apology that reads as follows:

If Kid Rock using the word faggot offends you, good chance you are one. Either way, I know he has a lot of love for his gay friends and I will have a talk with him. Have a nice day.  -Bob Ritchie

This is of course just the latest shitshow in a long string of ignorant, ill-advised and/or offensive activity from the singer. In 2018, he said “Screw that bitch” in reference to Joy Behar, which got him booted from his role as the Nashville Christmas Parade’s grand marshal. He went on to issue a drunken rant about Behar, Oprah Winfrey and more from the stage of his aforementioned ass-themed bar. A year ago this month, the vocal Trump supporter’s bar (which also at one point employed the so-called zip-tie guy of the Jan. 6 insurrection) was cited for lack of compliance with COVID-19 guidelines. He also made a little cameo in the Scene’s Feb. 25 cover story alongside his pal, business partner and fellow Butt Bar co-owner Steve Smith. (His words for the Scene: “Fuck them.”)

How will the 50-year-old “Bawitdaba” singer manage to embarrass Nashville next? Only time will tell.

Honky-Tonk Blues: The Pandemic and the Changing Culture of Lower Broadway

In July, as Nashville was hitting new highs for COVID-19 positivity rates and hospitalizations were surging across Tennessee, TMZ published a …