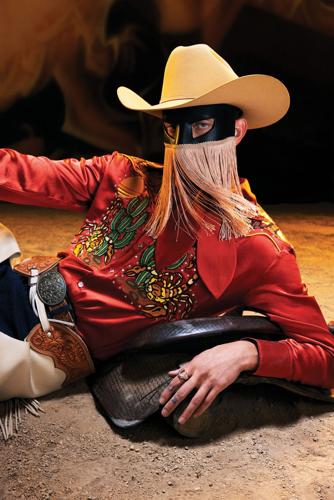 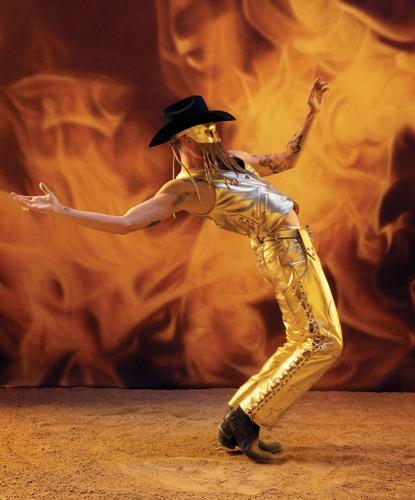 Orville Peck and his 2019 debut Pony made for one of that year’s most surprising success stories: a baritone-voiced Canadian crooner who shrouds his face behind a fringed leather mask, but who opens his heart to his audiences with his songs. The Sub Pop-released sleeper hit of an album channeled the past 60 years’ worth of spare, melancholic music — from Patsy Cline and Roy Orbison to Joy Division, early R.E.M. and Chris Isaak — from the novel point of view of a queer man searching for his place in the world. The Zorro-like mask was quite the conversation piece, but in an era where fans practically demand the intimate details of the artists and musicians they follow, Peck pulled off a remarkable feat with Pony. His is a songbook and mythology so well-crafted that one quickly stopped caring about — or even desiring to uncover — what was fact and what was embellishment.

When Peck takes the stage for his Ryman debut on Friday, he’ll be returning to Music City in the wake of his rain-soaked appearance at Nashville Pride in 2021, which was itself a follow-up to his star turn at Mercy Lounge on the final night of AmericanaFest in 2019. Drawing one of the most eclectic crowds at the six-day festival and conference, Peck’s epic performance highlighted his showmanship, range and already deep repertoire. He kept attendees talking long after he and his entourage left town. That room, that night, had the undeniable feeling of watching an artist in his final days as an underground concern. Sure enough, he announced his move from Sub Pop to Sony-Columbia mere months later.

Playing Friday, May 13, at the Ryman

Peck tided over listeners hungry for more with the 2020 EP Show Pony, a joint release by his old and new labels. The record opens with the brooding piano ballad “Summertime” — recorded at Sound Emporium Studios here in town, with local luminary Luke Schneider on pedal steel — and it closes with a cover of Bobbie Gentry’s “Fancy.” The EP is fortified by new originals like “Drive Me, Crazy,” a love song to a long-distance trucker. The six-song mini-album’s major coup was “Legends Never Die,” a duet with fellow Canuck and avowed Peck fan Shania Twain. Another admirer, Alicia Bognanno of Nashville’s own Bully, covered Pony highlight “Turn to Hate” on a 2020 release of her own. More recently, viewers might’ve noticed Peck songs soundtracking scenes in the fifth installment of the Scream series (Peck’s own version of “Turn to Hate” appeared there) and the Season 2 premiere of HBO’s transgressive teen drama Euphoria (“Dead of Night”).

Although the album cycle for Pony wrapped by the time the pandemic came swooping down in 2020, artists on the verge like Peck stood to lose a lot of momentum when the world stopped that March. But as evidenced by Bronco, Pony’s long-awaited full-length follow-up, he made the most of his time away from the stage.

An exciting new chapter in the Orville Peck saga — with 15 songs clocking in at just under an hour, maybe even two new chapters — Bronco maintains the distinct mood and feel established on the debut while adding new wrinkles sonically and thematically. In several places, it nakedly nods to the past two years’ forced hiatus: “I haven’t seen my band in a while,” Peck laments on Bronco’s sweeping opening salvo “Daytona Sand.” One song later, in “The Curse of the Blackened Eye,” he recalls how he “sat around last year, wishing so many times I could die.”

However, the music on Bronco rarely wallows. Even the string-accented tearjerkers “Kalahari Down” and “Let Me Drown” positively soar. Discernibly more of a full-band effort than its predecessor, Bronco has a celebratory nature that’s a welcome diversion from all that’s happened in the past two years. It’ll be exciting to see and hear how the masked musician’s stage show has evolved. Meanwhile, standouts like Bronco’s raucous title track, the evocative road-trip chronicle “Outta Time,” and the loquacious barroom shuffle “Any Turn” promise to shake the Mother Church’s foundation.