The Route: From the Mill Creek Greenway parking lot on Blue Hole Road, north on Blue Hole. Then left on Antioch Pike to the intersection with Haywood Lane and Richards Road. 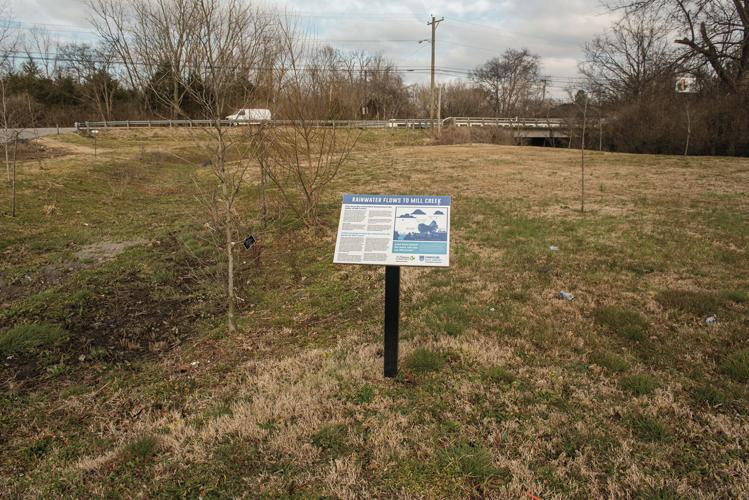 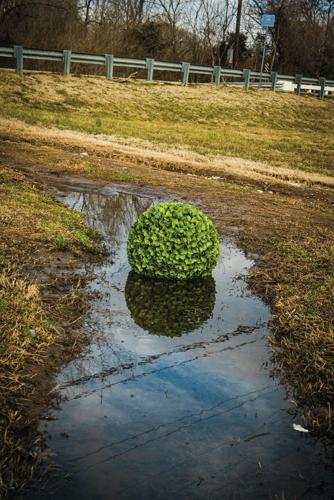 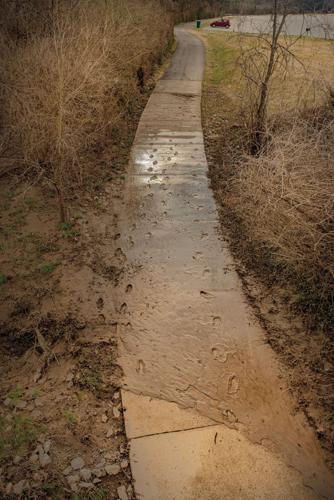 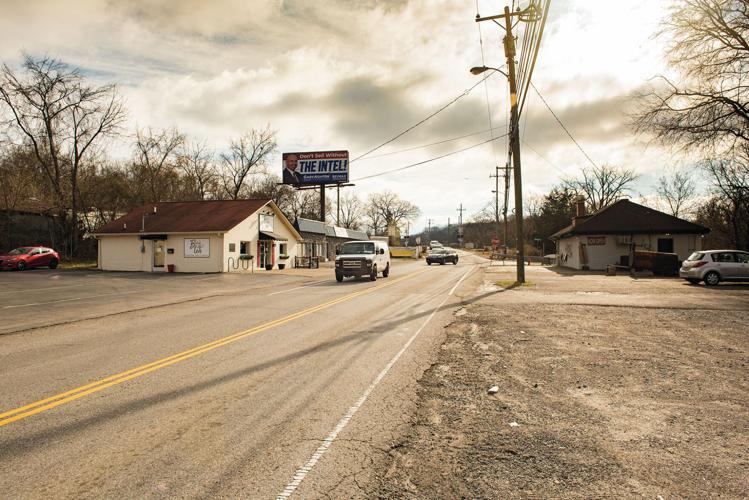 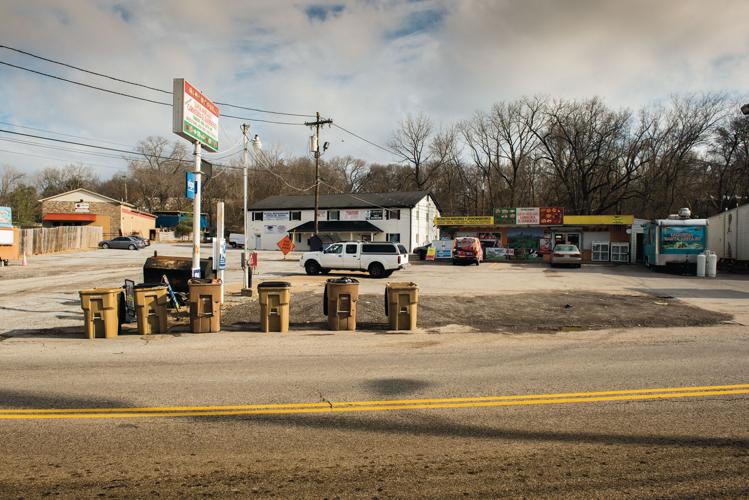 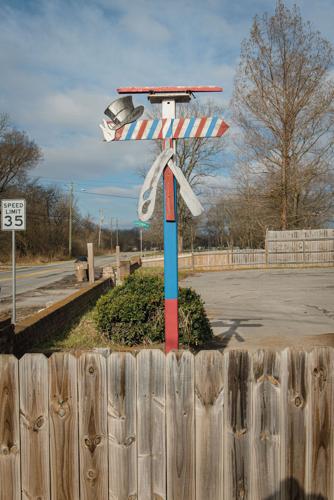 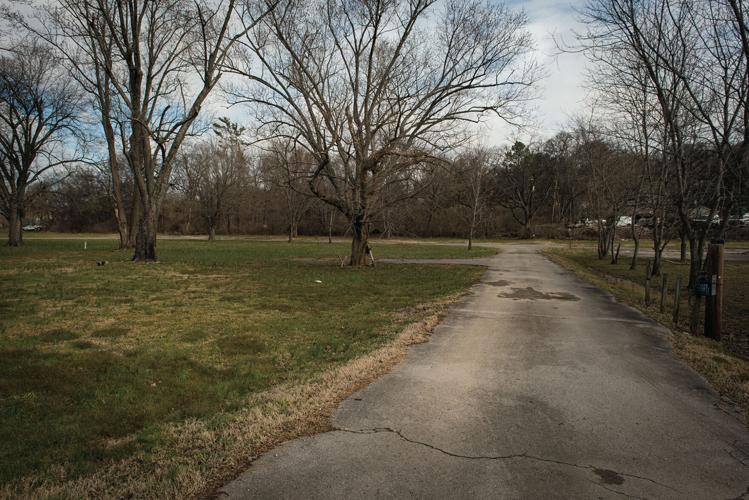 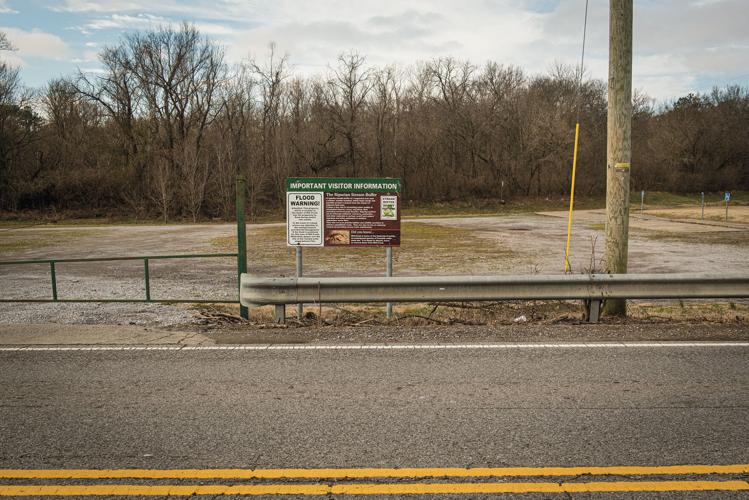 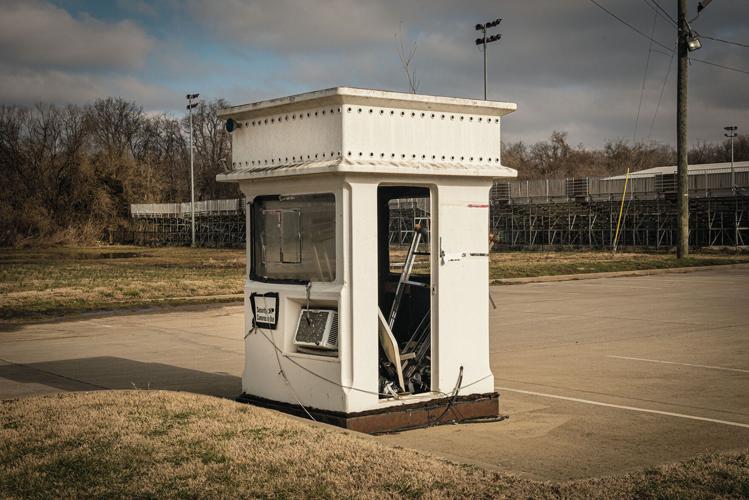 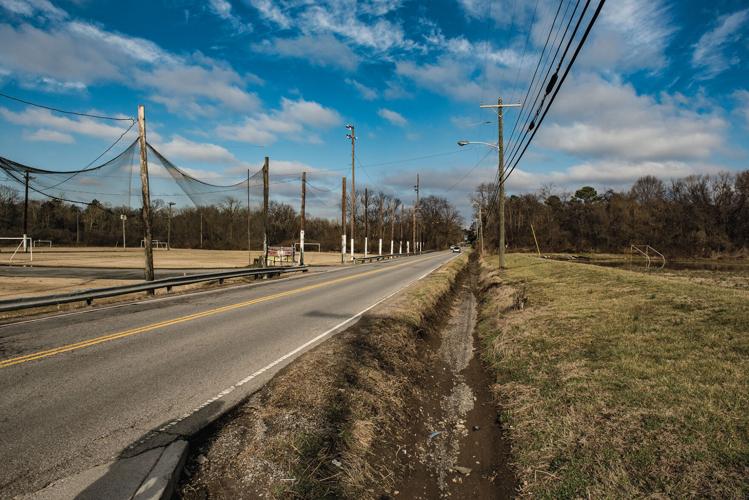 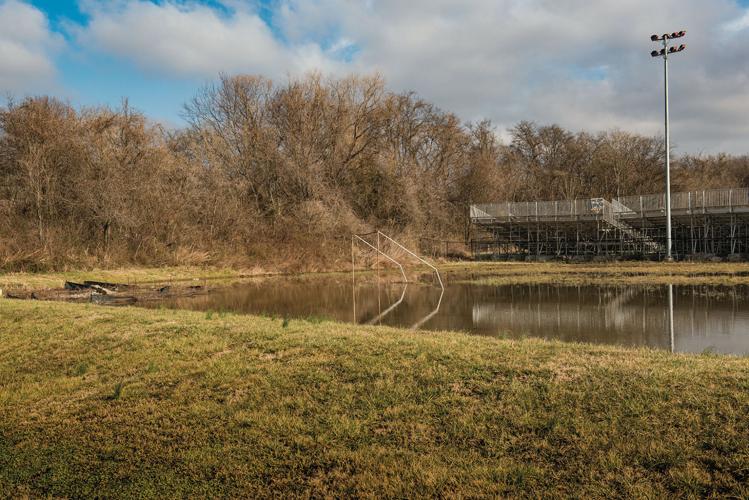 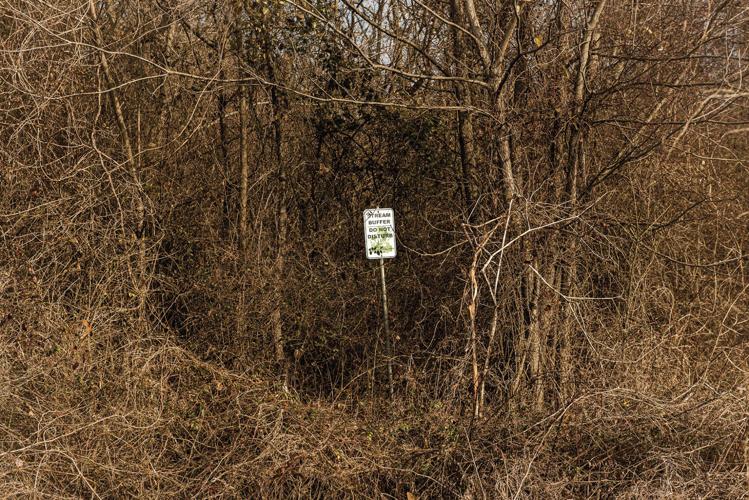 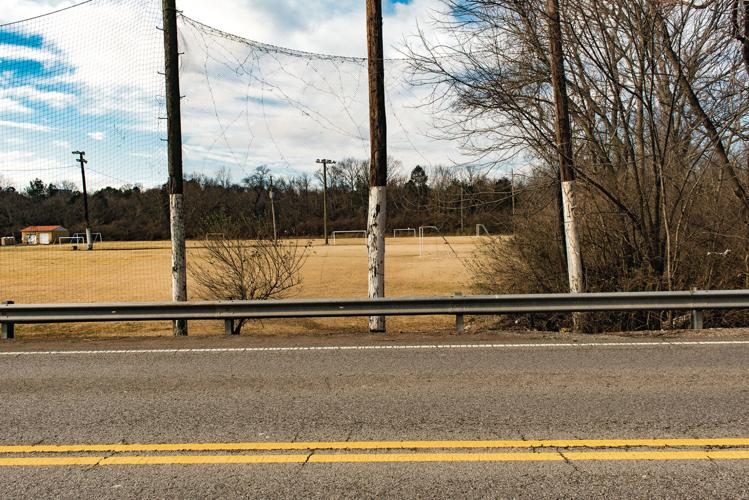 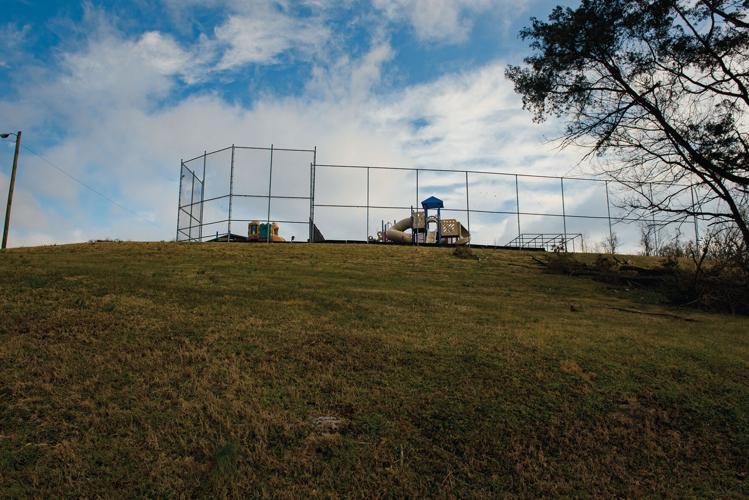 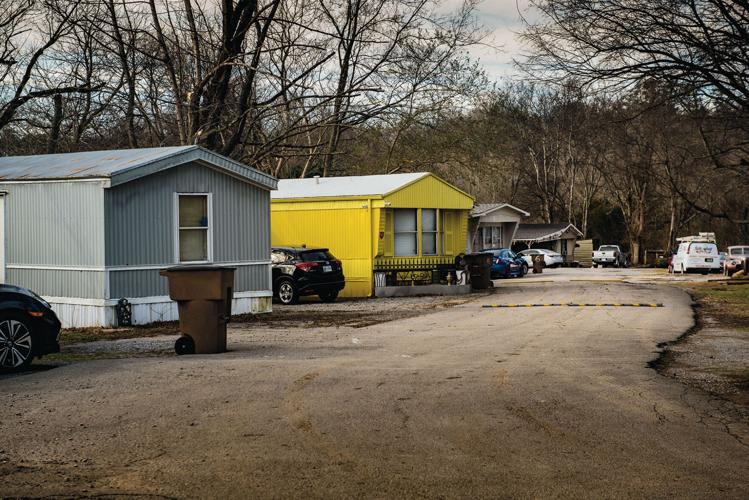 There’s no getting away from Mill Creek.

It flows nearly 28 miles from where it rises just outside Nolensville, winding through Antioch and Donelson, skirting downtown and joining the Cumberland River across from Shelby Park.

Before 2010, the watercourse mostly made headlines as the only habitat on earth for the highly endangered Faxonius shoupi, better known (maybe?) as the Nashville crayfish. But in 2010, Mill Creek became infamous. When the floods came in May of that year, they struck there first, killing five people, destroying countless homes and sweeping buildings from Lighthouse Christian School’s campus down Interstate 24. Now seemingly every time the rain falls, our eyes turn south to Mill Creek — our canary in the coal mine for flooding.

On a bright and chilly February morning, Mill Creek looks threatening once again. Heavy rains the day before have it muddy and turbulent as it rushes under the bridge that carries Blue Hole Road over its waters. In the time before swimming pools, aquatic recreation was, of course, confined to suitable spots — “swimming holes” or “blue holes” —  in creeks and lakes. There was one in Mill Creek, thus the road name.

On this particular morning, there’s plenty of blue in the sky, but only café-au-lait brown in the water. There’s an effort underway to mitigate heavy stormwater flow from the absolutely massive parking lot for the greenway. There are saplings to hold back erosion and channels to divert the runoff properly. And there’s one perfectly round, bright-green shrub. It doesn’t belong, and so a parks worker tosses it in his pickup.

There’s a little clutch of commerce at the intersection of Blue Hole Road and Antioch Pike. Snuggled next to the bridge in a windowless brick building, Las Vias offers a tantalizing variety of Mexican food. Across Antioch Pike, British Bee Tea Co. pours cups for customers in a building that nailed the teahouse aesthetic as best it could for its location. Next to that, a mattress concern.

There are seemingly acres of parking lots on Antioch Pike, perhaps the cause of Mill Creek’s propensity to exceed its banks, and plenty of vacant land, a by-product of that propensity. At the rear of one such parking lot, next to the mattress place, is a two-story office building, though it serves as the home to a church and a barber shop.

The rail line runs tight against the back property lines on the north side of Antioch Pike, and Mill Creek presses hard against the rear of the properties on the south. Both are roaring on this February morning, the trains running to Radnor Yard and points beyond, the creek making its noisy way to the Cumberland.

With those aesthetics — the creek, the whistle of the train, the relatively significant amount of open space — Antioch Pike does sometimes feel like a country backroad. But it’s far too busy for that. It’s a critical pathway for folks trying to dodge the inevitable traffic jam on I-24, and it connects Hickory Hollow with Antioch proper, besides. Add in Antioch High and Antioch Middle, and there are plenty of cars. What there aren’t, though, are sidewalks — making it a perilous walk indeed.

Walking is safest when passing one of the aforementioned massive parking lots. But more often than not, there are mere inches between the white line of the road and what passes as a shoulder — a narrow strip on the edge of a ditch.

Antioch Pike dates to a time before the Complete Street movement. It was built by the Mill Creek Valley Turnpike Co., which was chartered by the General Assembly in 1846. It ran from the “four mile mark of Nolensville Pike,” crossing Mill Creek at Rains’ Mill (more or less where the oddball intersection of Haywood Lane, Richards Road and Antioch Pike is today) and then turning south. It follows the same route today — though the stretch between Sevenmile Creek and Nolensville Pike in Glencliff is known as McCall Street now. The history also explains why it abruptly changes to Una-Antioch Pike at Blue Hole Road. The old turnpike stopped there when it was built.

Much of this information would be available from the Antioch Pike historical marker, which is supposed to be located at the front edge of the Metro Parks property just west of Goodwin Road. The marker is not there. And if this is a Metro Park, it’s a very odd one, as it looks more like an abandoned trailer park (which is what it used to be).

As Antioch Pike makes its way northwest, it bifurcates the International Indoor Soccer Complex, which is a bit of a misnomer, because there are plenty of outdoor fields too. The privately run complex is impressive and includes a good-sized outdoor stadium, which, eyeballing it, seats as many people as a decent high school football facility. Behind that is the indoor facility, checking in at 33,000 square feet. And next to Antioch Pike? A quaint ticket booth that looks like it may have come out of a Fairgrounds Nashville surplus sale.

The creek creeps closer to the road here, making it impossible to ignore the chirping of the concupiscent frogs who are thumbing their little frog noses at the chilly morning and singing their springtime songs anyway.

Antioch Pike is now mostly devoid of residential properties, years and floods each doing their part to send homeowners elsewhere. A strong patch of bamboo, thick-trunked trees and a bricked-up well on an otherwise flat and vacant tract just beyond the soccer complex are signs that there once was a home here, likely even a substantial one. A more modest home, dating from the late 1940s, is next door.

The creek bends in tight at Antioch Pike’s intersection with Reeves Road, but the land rises up defiantly in its face. The only substantial hill on this whole stretch is on the edge of the Antioch Church of Christ’s property, and it looms so high and steep it’s hard to see what’s up there. Chastened, the creek turns away, running behind the used-tire/used-car lot across the street from the church. Next to that? A trailer park, where one resident has charmingly painted their trailer caution-sign yellow, whereas all the others are battleship gray.

Two 1920s stone houses with high-peaked roofs — architecture more common to Madison and Inglewood than here — break up the run of auto-parts stores and tiny shops as Antioch Pike makes its way to that bizarre intersection with Haywood and Richards.

And they’ll make their way on Antioch Pike, good Lord willing … and the creek don’t rise.