Deputy Fire Marshal Maggie Lawrence, a 30-year veteran of the Nashville Fire Department, filed a lawsuit against Metro Friday alleging hiring discrimination and workplace retaliation. According to the suit filed in U.S. District Court, despite a spotless professional record and receiving explicit preparation for the role of fire marshal by a superior, Lawrence was passed over by Fire Chief William Swann, who instead promoted Lawrence Hutchison Jr. in January 2021.

“As Ms. Lawrence was preparing to become Nashville Fire Department’s first female Fire Marshal, the Department’s Chief took drastic measures to ensure that the 'good ole boys club' stayed in place,” Lawrence alleges in her complaint. “He reassigned a significantly younger, less experienced male employee from another department to the Fire Marshal’s Office, and instructed Ms. Lawrence and her boss to train him to take over.”

The Nashville Fire Department did not provide any additional information to the Scene, citing a policy of not commenting on pending litigation.

Lawrence, who is 64, alleges that both her sex and her age played roles in the department’s choice to hire Hutchison. After she filed a related complaint with the Equal Employment Opportunity Commission in September 2021, Lawrence was put on a Performance Improvement Plan by Hutchison, then her direct superior. The next month, WSMV aired a story about workplace discrimination within NFD that featured an interview with Lawrence. Following a subsequent meeting, she was suspended from her position and tested for drugs and alcohol — all actions that, Lawrence argues, should be seen as retaliatory.

“It’s really brave of Ms. Lawrence to come forward, especially when she’s still working at the department,” her lawyer, Robb Bigelow, tells the Scene. “It’s our hope that no further retaliation occurs as a result of her filing her lawsuit.” Bigelow expects a response from Metro legal next month.

The fire department also came under scrutiny for issuing a 16-day suspension of firefighter and comedian Joshua Black (who is also an occasional Scene contributor) after comments he made on personal social media in the spring. Lawrence seeks damages and an explicit ruling from the court affirming that NFD violated her civil rights and age discrimination protections. 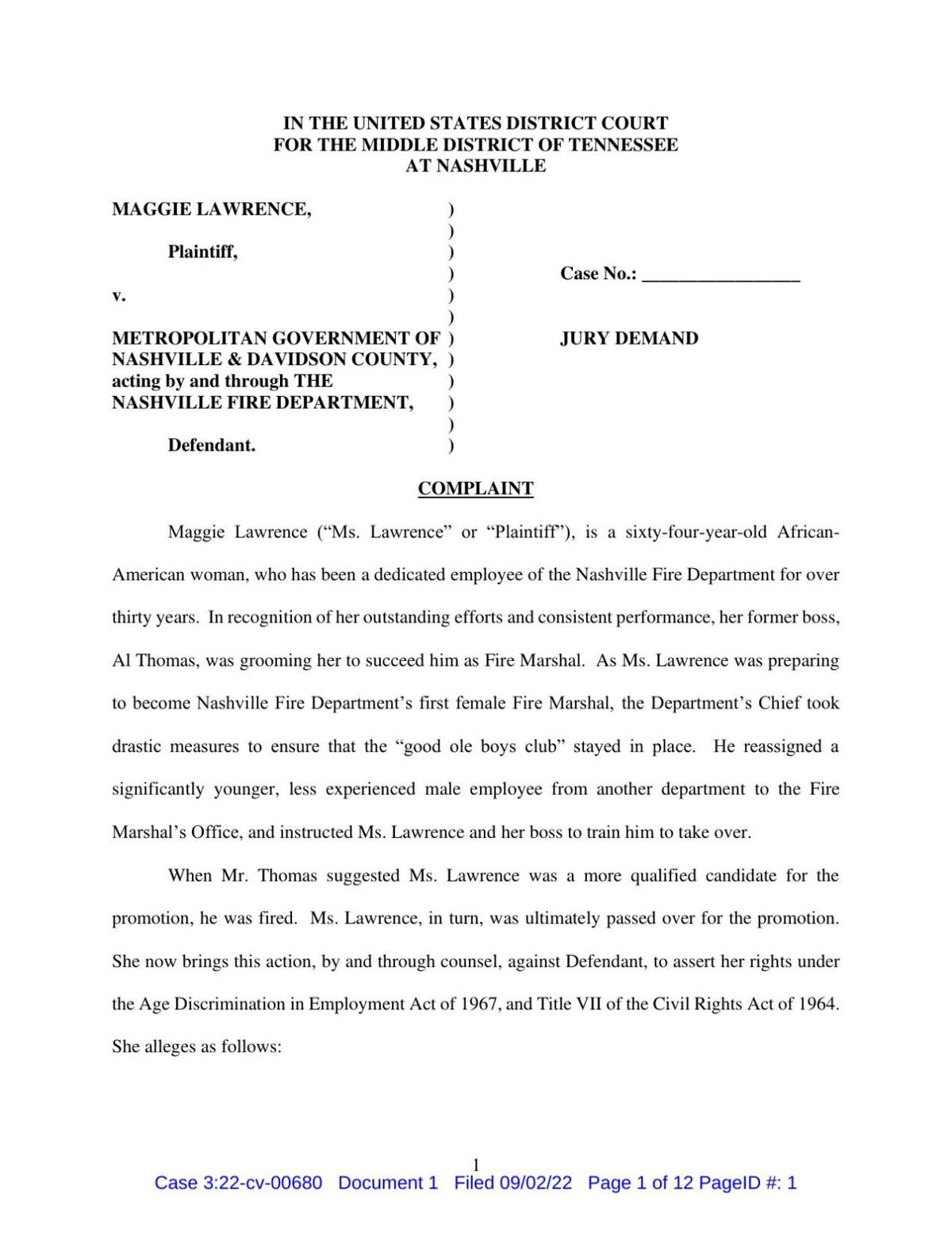