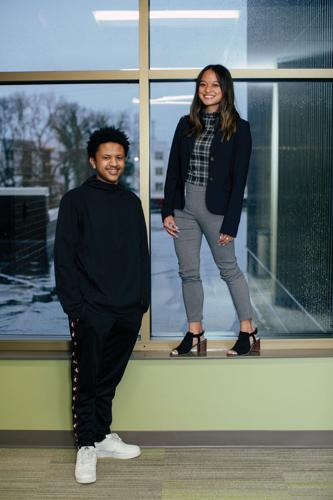 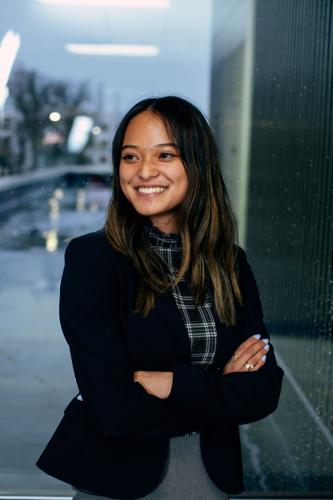 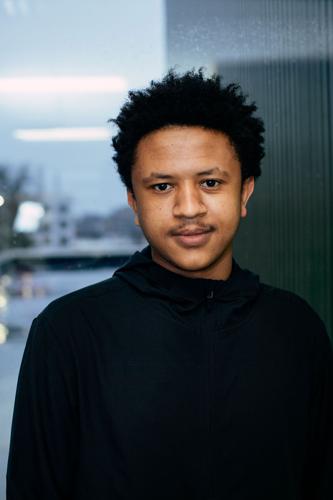 The student representatives of the Metro Nashville Public Schools board are arguably more mature than some of the adults surrounding them. Twice a month, Angelie Quimbo and Abenezer Haile sit in the crossfire as adults talk — and sometimes bicker — about what they think is best for students. Unlike most of those adults, however, Haile and Quimbo must return to school and live with the consequences of the decisions the board makes.

The Scene met with the students just an hour before a particularly heated meeting at which the board voted to lift the district’s mask mandate after spring break — a move that both students advised against.

Haile was born in Ethiopia and Quimbo in the Philippines, but they both grew up in the Davidson County school system. Haile is a junior at Martin Luther King Jr. Magnet High School and Quimbo is a senior at Hillwood High.

You’ve sat in some pretty heated board meetings — what has that been like for you?

Abenezer Haile: I think it’s very interesting. In the heat of the moment, you might see a person say something that you’re not completely in agreement with. But you also have the ability to observe the beauty of democracy, so anybody can come up and say whatever opinion that they have, as long as they do it respectfully. So like I said, in that moment, you’re [thinking], “What are they saying?” if you don’t agree, or if you do agree if you’re like … “This person is saying the perfect thing.” But then after we leave and you reflect on the meeting that you just experienced, you get to understand that what you saw was the play of democracy in action.

Angelie Quimbo: I will say that I’ve had my fair share of parents or people in the community coming after me. … I guess me being 18, I’m seen as an adult and that justifies, like, “I can personally attack your views.” In my opinion that’s not really a quality argument. … It’s not going toward anything. It’s basically saying, “Your view is wrong, and I’m right.” And that doesn’t really sit right with me. … But taking that into consideration as student board members, I think it’s important for us to be exposed to different views, different opinions, especially from our community, because that’s the people we represent.

Is there something that you wish adults would understand about the student experience?

AH: The perfect way to, I think, answer that is — from both sides you have to have the ability to empathize [with] the side that you’re talking to. So for example, if you’re a student, and you see a lot of decisions made by your administration, or you see your parents making decisions that you might not be agreeing with, you still have to be able to empathize and see what direction they’re coming from. And it’s the exact same thing with parents too. If your child isn’t, for example, getting the grades that you would expect them to get, it doesn’t automatically mean that you have to set restrictions on them, like, “I’m going to take your phone.” You should also be able to have that ability to say, “OK, what’s happening in their lives that I can put myself in and try to understand?” So I think the highlighted key vocab is — try to empathize.

AQ: Maybe the saying that parents always know best, or have the best interest for their kids — I’m not completely on board with that being 100 percent true. Again, like what Abenezer said, there has to be a sense of empathy both ways. I know that it comes from a place of privilege saying that; I have a really stable relationship with my parents, and I know that not every student has that. … But being able to communicate with your kids, being able to communicate with your parents, especially about grades or mental health or what’s going on in school, is really important. And if I could tell one thing to parents … just check in with your kids and don’t walk into your conversation with your child thinking that you know everything that’s going on, because you may not. And it may take time for a student or even a parent to open up to one another, and it’s just about trust and time.

Parents thinking they know what’s best for their kids is a concept that’s been used in conversations surrounding critical race theory and censorship. What are your thoughts on that and how has it affected you?

AH: So with censorship, especially concerning the books, I don’t think we’ve had the chance to actually be blocked from reading something that’s been removed from the library. But with things like CRT, you can … see a shift in the climate in the classroom, for example, after certain laws are passed by the state government banning CRT from being taught. So I think it has a lot more effect on students than people realize, because just because you’re stopping me from reading a book doesn’t necessarily mean you’re doing something that’s in my best interest. You might be stopping me from exploring something that I’m interested in … or trying to grow as a student or as a person. So there’s just that really huge shift in climate — especially after all these talks have started happening on social media and stuff concerning CRT and how students, we’re being brainwashed into thinking a certain race is responsible for a whole other race’s oppression.

AQ: I know if I were a parent, to a degree, I would want to know what my child is learning, as well. So to all the parents concerned about what’s being taught in schools, I completely respect that. … But with that being said, as well, just the whole controversy with CRT, with the banned books, is really problematic in my eyes … especially the no-CRT [law passed in Tennessee], it was on the grounds of not teaching kids biased history. But by restricting a sense of history that is honestly a part of our history, like deeply rooted, it’s not just a surface-level thing. You’re [further] restricting freedom of thought or even students’ ability to maybe question what’s going on.

Has the censorship prompted you to seek out more information on your own?

AH: Yeah. … The irony behind it is, by you actively saying “Students can’t learn this,” … you’re advertising it. Especially with the books that they’re banning.

AQ:  With that [legislation], students are actively looking up “What is CRT?” and thus getting more exposure to those in-depth conversations or in-depth resources.

Has your experience as a student board rep shaped what you want to do moving forward?

AH: Definitely. Yeah. You get to see how you can directly … influence people’s lives. … The policies that they pass at the board meetings, it’s very different from the policies that are passed at the federal level. So at the federal level, it takes a long time to actually affect someone’s life. With this, if something happens on Tuesday, it’s gonna affect the student’s life on Wednesday. It shows you how important, but also underrated, the municipal-level government is.

AQ: I’ve always been really interested in governmental structures, and the board is a governmental entity in itself in a way, governing the different schools in the district. It’s really interesting seeing policies get passed and different things like that, that you don’t really get to see as a normal student.