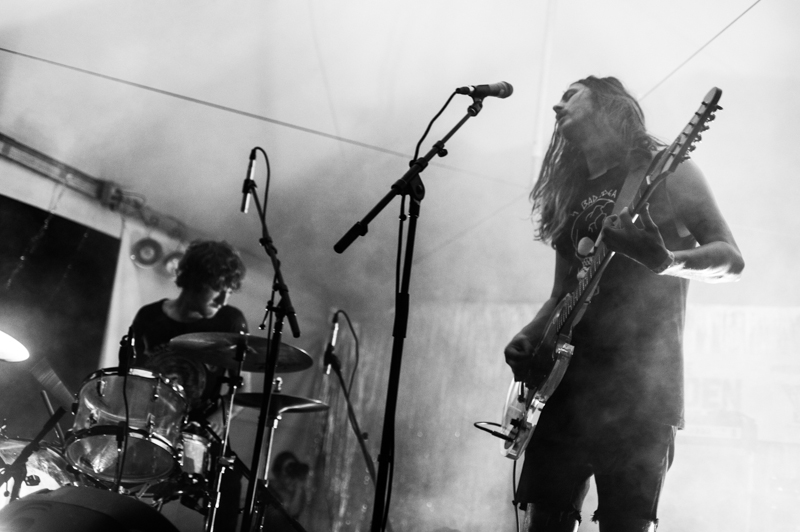 JEFF the Brotherhood at Nashville Outlines outside The Stone Fox, 8/3/2013 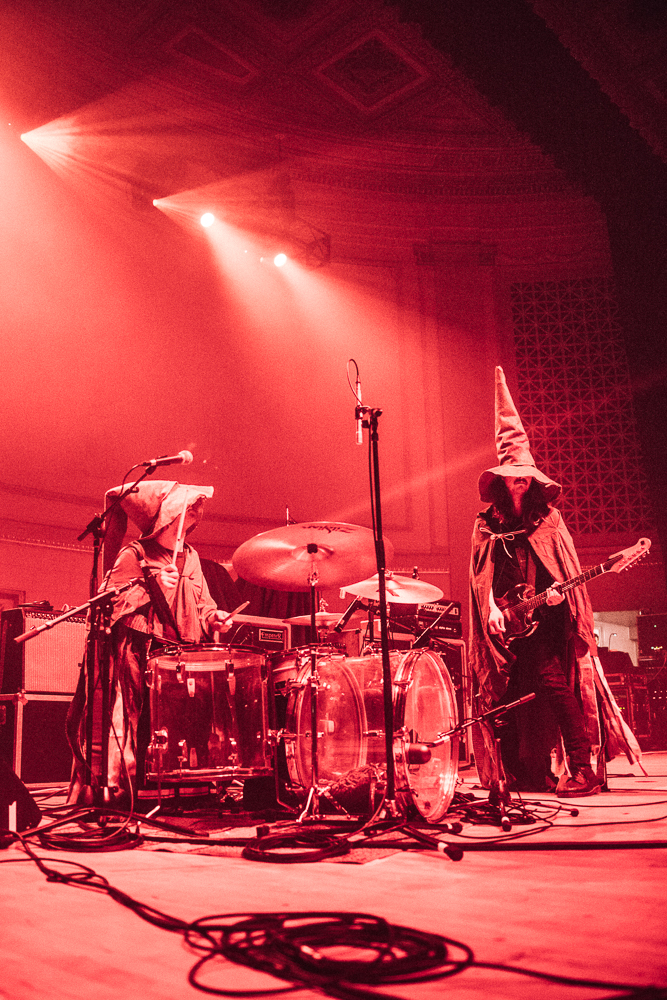 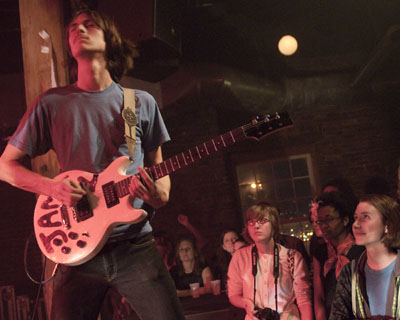 “Came, saw, conquered,” is the kind of pithy phrase one might be tempted to use to describe JEFF the Brotherhood’s 15-year reign as a driving force in the Music City underground. Something like “Born, raised, left our mark and moved on — yet the door remains open for more,” might be a bit less concise but lands closer to the truth.

The sons of songwriter-painter Robert Ellis Orrall, singer-guitarist Jake Orrall and drummer Jamin Orrall have had music ingrained in them from a young age. During the late Aughts and the 2010s, the Bogus Bros and their locally focused label Infinity Cat Recordings (which made what’s been announced as its final new release earlier this year) were instrumental in bringing contemporary Nashville rock and punk to the masses.

JEFF took a winding road from unassuming skate rats playing in pizza parlors to the cusp of rocking stadiums. The duo polished its earliest work's rougher edges with 2011’s guitarmony-heavy We Are the Champions, and went even further on a pair of releases made while signed to Warner Bros.: 2012's Dan Auerbach co-produced Hypnotic Nights and 2015’s ultra-hi-fi Wasted on the Dream. Later work like Global Chakra Rhythms (also from 2015) and Zone (2016), meanwhile, showed a more experimental side. The tour for 2018's Magick Songs featured an expanded five-piece band, including Kunal Prakash on guitar, Jack Lawrence on bass and Jenna Moynihan on vocals. The release celebration at The Basement East in October 2018 ended up serving as JEFF's unofficial farewell to the city.

Since then, Jamin Orrall has lived out West pursuing puppetry, while Jake is in New Orleans, putting new irons in the fire. They’ll reconvene Wednesday for a Thanksgiving Eve gig at Exit/In — Kent Osborne and Snooper open, and advance tickets are $23. Ahead of the show, I caught up with Jake by phone.

At a restaurant, waiting on a table. St. Germain, in New Orleans. Ran into some friends.

Where is this spot, and what do they serve?

The Bywater, just south of where I live, in St. Claude. They serve natural wine, and these amazing small plates. Their tasting menu — it’s insane. “Psychedelic,” my friend Quintron, who’s right here, calls it. [laughs]

What are your favorite things about New Orleans?

Riding my bike everywhere. There's frontier here. You can start things without people telling you you can’t. They don’t mind noise.

I lived out of my car for two years since I moved out of Nashville, before the pandemic. I visited friends all over, and realized I had more friends here than anywhere. I still have a car, but I don’t use it that often.

This being our first conversation since JEFF’s Basement East gig in 2018, take me through what you have been up to since then, in life and in music.

If I had known there was going to be a global pandemic, I would’ve worked a little harder in 2019. [laughs] After [Magick Songs] I left town. Headed up to Maine and Vermont. Lived in a trailer I was pulling behind my car. Did carpentry and odd jobs.

What about your brother — where’s he at?

Los Angeles. He became a puppeteer at Bob Baker, and also works at a bike shop.

Wow. Total opposite ends of the country.

Yeah. [laughs] I also went to China, and Mexico. I have a close friend who’d lived in Beijing for many years, doing an architecture practice that he was about to move back to New Jersey, so I wanted to come see what he’d been up to. The trains are so good there — easy to travel around.

Did you get to check out some music there?

Absolutely … shows every night at this place in Beijing, Temple Bar. Again, so much frontier for people to make new things. And Mexico … every time JEFF tried to play there, it got cancelled [laughs] But Oaxaca City, I’ve gone every year since. I’ve got a friend there, an ethnomusicologist studying traditional brass bands in Oaxaca state. To be a musician there, it’s as respected as any other profession. And the food … last time I went, I came back with pounds of Oaxacan cheese and bags of tortillas. [laughs]

Having scarcely stopped releasing records and touring since JEFF started, did the forced pause of 2020 allow for some reflection on where you’ve been and where you’re going musically?

It’s definitely been unsettling. Jamin’s found a career in puppeteering, and I’m proud of him for that. Me, I have no clue. Right now, I’m renovating a house in New Orleans. Earlier, I was tiling the shower walls.

What old JEFF records do you go back to the most? Any you’d rather be left to time?

Zone and Magick Songs I like. We’ve always had a weird relationship with Wasted on the Dream. That was our Siamese Dream … at least that’s what we were going for. I’ve only been able to finally listen to it objectively recently.

Have the true fans come around on that one?

I have no idea. [laughs] We have another record we recorded this year, coming out next year. Made it over four days. Jamin came out, and we wrote and recorded it while he was in New Orleans helping me tile my kitchen floor. It’s in the vein of Global Chakra Rhythms, mostly improv. Kunal is also on it.

Tell me about your new label, Earthbound Sound.

It’s the name I’ve DJed under for the last five years. I considered it an umbrella for potentially releasing records [among other things]. I also got into photography during the pandemic — 35mm, point-and-shoots.

Any Bandcamp discoveries from the past year that you’d recommend?

Erika de Casier, from Copenhagen. Schwefelgelb, from Berlin. And Ntski, out of Kyoto.

Back to the new label — what are your aims for it? Where does it break from your history with Infinity Cat?

Infinity Cat was a platform for young D.I.Y. punk bands in Nashville. That was the purpose. The new label … I run it myself. The new JEFF record is going to be the third official release.

We’re playing as a trio, with Kunal. Set list is from all eras — a guitar-oriented shred-fest.

JEFF the Brotherhood Branches Out on Magick Songs

JEFF the Brotherhood signed to a major label to 'make two albums and get dropped,' and that's exactly what they did

JEFF the Brotherhood, Infinity Cat Recordings and a decade-long ride from the indie trenches to the majors (and back)

The Kids Are Alright

JEFF the Brotherhood Rides On at Exit/In

The local heroes' Thanksgiving eve gig, supported by Snooper and Kent Osborne, turns back the clock while looking forward