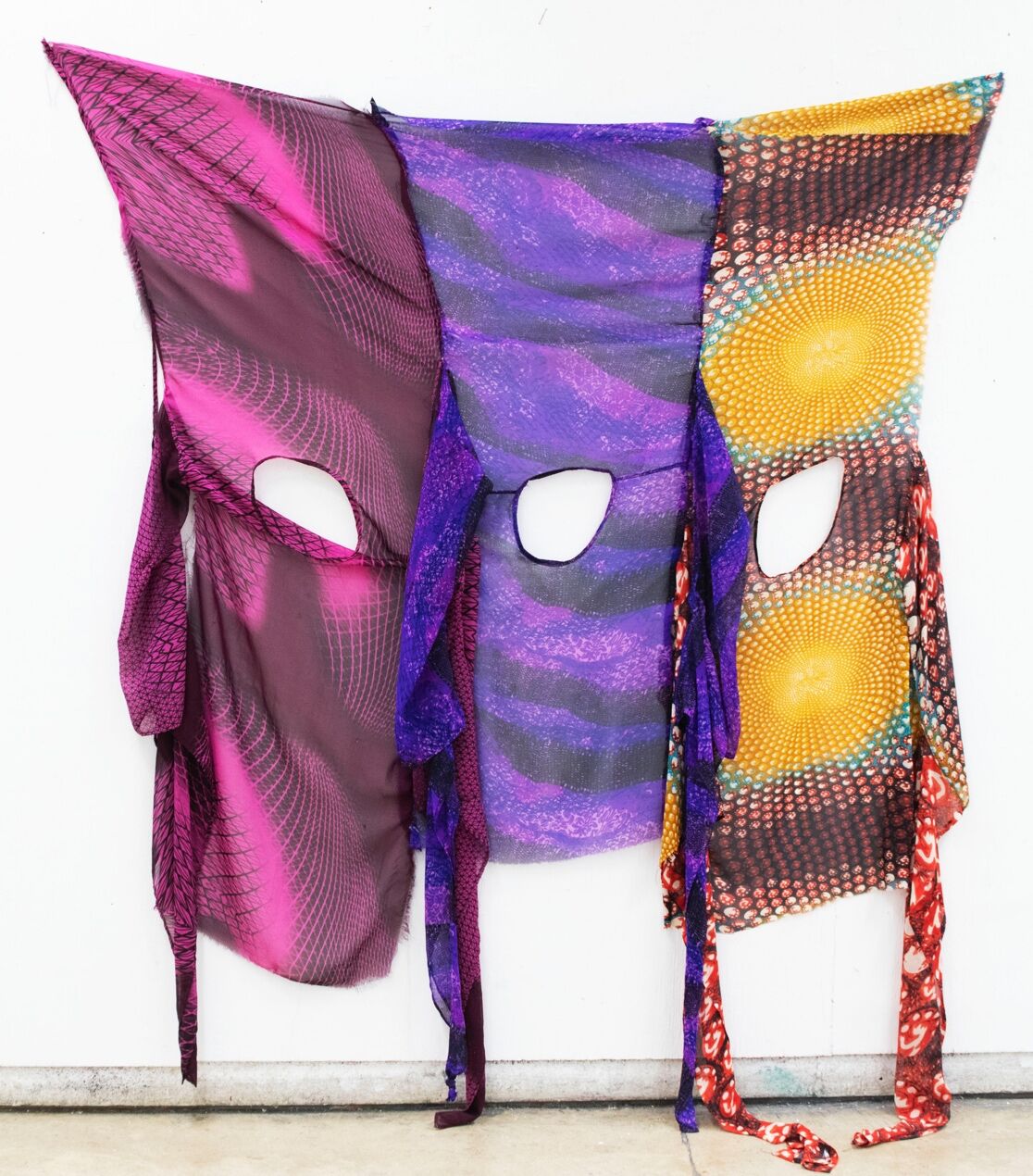 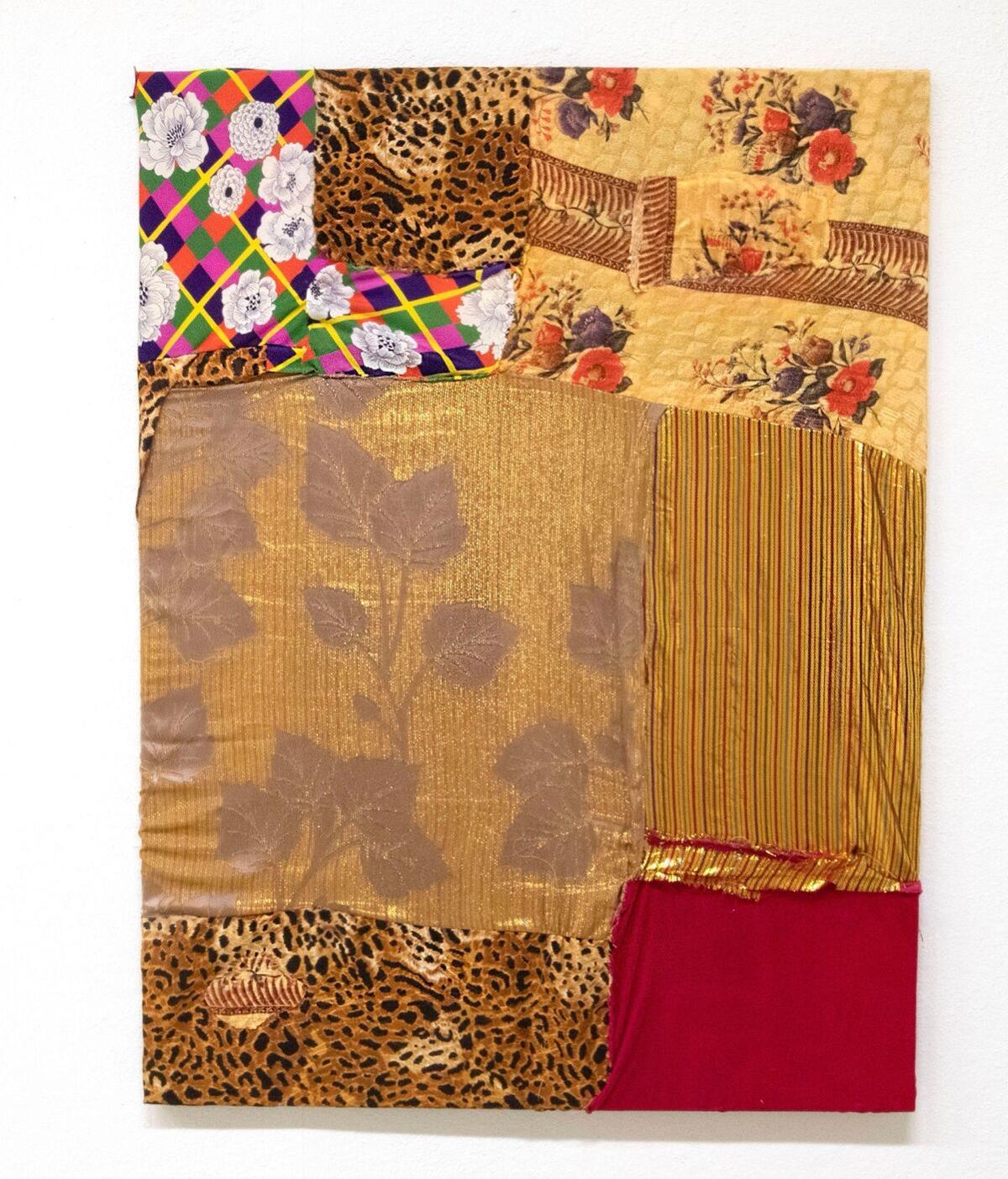 When I wrote about Nuveen Barwari’s show at The Red Arrow Gallery — Gul Barîn: the state of being showered with flowers — in the Scene’s Fall Guide, I expected that the artist’s first solo exhibition would offer a culmination of sorts, a blossoming of an artistic vision that I’ve seen developing over several years. In this work, Barwari documents her experiences as a so-called third culture kid — she was born in Nashville’s Little Kurdistan community, but spent some of her teen years in Duhok, Kurdistan. The exhibition doesn’t disappoint — it features Barwari’s signature textile collages, and it manages to incorporate the artist’s humorous sensibilities while remaining a top-notch display of compelling abstract art informed by personal narrative.

Gul Barîn: the state of being showered with flowers

Through Nov. 28 at The Red Arrow Gallery

The show centers on the big — nearly seven square feet — and beautiful “4 sisters, 3 dresses.” The piece consists of three colorful, flowy, transparent garments sewn together at the edges to form a large piece of fabric. The work speaks to the sisterhood of female siblings, but also to the sisterhood between women in a community that has experienced suppressive regimes that often ban the wearing of these traditional garments. The sheer dresses are always worn with another layer underneath, and in her artist statement Barwari explains that this aspect of the piece can also speak to layers of language that inform various Kurdish dialects, and layers of history that inform the identity of the Kurdish diaspora. Barwari also relates her Americanizing of the garments by pairing the dresses with tank-top undershirts. It’s a funny detail, but it’s also the kind of personalized message that makes Barwari’s work exceptional amid a plethora of identity-based art that often fails to deliver the kind of intensity that can only be distilled from an artist’s actual personal experience.

Works from Barwari’s “Naxshey Gul”/“flower map” series are probably my personal favorites. In these works, Barwari combines textiles by wrapping them around wooden panels. The result is a 2-D wall-hanging artwork that reads like a painting, even though there are no pigments or binders to be found. I love these works for a few reasons: First, they’re emblematic of Barwari’s practice, combining traditional Kurdish handicraft into Western gallery objects. Second, I love abstract painting, and Barwari’s connection between these “flower maps” and abstract landscapes is right on target. Barwari matches colors and designs in these works to create lots of energy and movement, and conscientious viewers will notice hidden designs beneath the layers of her shiny but sheer surfaces.

Again, Barwari’s sense of humor is one of her best qualities, and this show’s best example of her sense for the absurd is “Sloppy Borders.” In this work, a diamond-shaped patchwork textile painting hangs on the wall while a red-and-gray fabric frame hangs about three feet in front of it. Borders are central to Barwari’s work: the colonial borders that disrupted the Kurdish people and their culture; the borders that markets create to commodify cultural objects; the borders around what a painting is supposed to be made of. “Sloppy Borders” is a hilarious title and a humorous work, but it also resonates with cultural and political implications — and the personal narrative that informs this exceptional display.