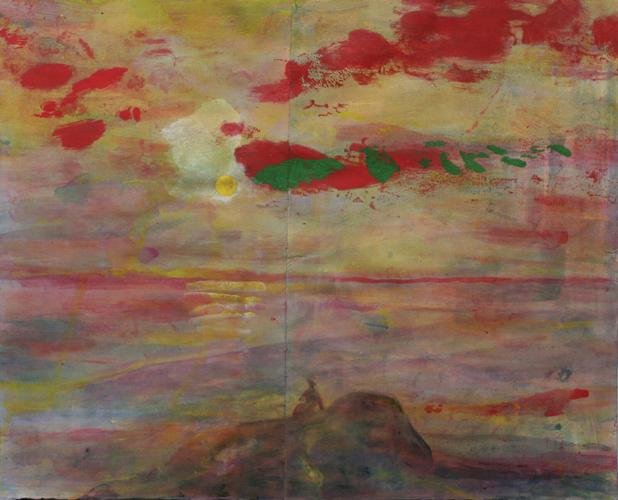 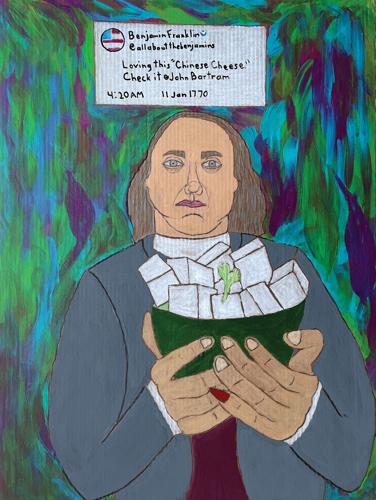 For April, Zeitgeist returns to its more regular group-exhibition programming after hosting Vadis Turner’s epic multimedia display Window Treatments for the past two months. This three-artist show features a broad range of works, which makes it the most crowd-satisfying exhibition of the month. Vivienne Flesher’s paintings on canvas and paper feature a layered, abstract style that manages to conjure landscapes and even the occasional figure in colorful, contemplative compositions at modest scales that encourage intimate viewing. Ward Schumaker’s multimedia panels combine photographic images and stenciled text to create intuitive compositions that often explore and illuminate historical happenings, geographical phenomena and spiritual systems. Matt Schumaker is a composer who engages algorithms with his melodies, and renders 3-D digital forms of his music. The model-like forms are geometric abstractions recalling early modernist painting and sculpture. I love intermedia art practices that simply ignore the imaginary boundaries between creative spaces, and Matt Schumaker’s art encompasses avant-garde music, computer science and the contemporary art-gallery sphere simultaneously.

During these past couple of years, we’ve all sought diversions to fill idle time at home or just to take our minds off of the collective bad news from around the globe. Kelly S. Williams’ new exhibition Diversion takes a closer look at the things we do to pull our minds out of our worries while living through a time when worries persist and multiply. In the process, the painter nods to trompe l’oeil traditions to investigate the various types of deception and misdirection that have characterized these days that many of us might rather just forget about. David Lusk Gallery will be holding an open house for the show on Saturday from noon until 3 p.m.

Now that it’s officially spring, I expect the Free Nashville Poetry Library’s Show & Sell Open-Air Maker’s Bazaar to really hit its stride. FNPL founder and Show & Sell ringmaster Matt Johnstone and his loose band of DIY makers did a great job negotiating an inclement winter to provide plenty of outdoor offerings even during the most nerve-racking days of the Omicron surge. Saturday’s open-air market will include Hey! Young Writer, Alee Anderson’s quarterly zine and online community dedicated to mentoring newbie scribes. And keep your eyes peeled for Soph Giampaolo’s unique sculptural wall hangings, shadow boxes and custom totes to haul all your art home in.

Kevin Guthrie describes himself as the “Ken Burns of courtroom sketch artists,” and his paintings on reclaimed cardboard beer boxes have gained the attention of outsider-artist national press and placement in a number of private Southern art collections. Guthrie’s exhibitions focus on historical narratives — his Bicycle Thieves display at Julia Martin Gallery in 2016 included portraits of every pro fighter who faced Muhammad Ali in the ring, and his June 13, 1972 exhibition in the space connected contemporaneous sports and pop culture with the Watergate scandal. Guthrie’s latest series started as an investigation of the Lewis County, Tenn., commune The Farm before expanding into an epic exploration of fermentation and immigration that outlines A History of Tofu in America. Nowadays we take once-exotic “health food” ingredients like tofu for granted, and almost all the weird natural food stores and co-ops from the 1980s and 1990s were ultimately swallowed by Whole Foods. But it wasn’t until the 1970s that ingredients like tofu and carob started to migrate from the kitchens of the back-to-the-land longhair types who founded The Farm in 1971 to become regular staples on some mainstream American dinner tables. Guthrie’s fascinating narrative encompasses a cornucopia of colorful characters and cultural collisions to tell the story of the evolution of vegetarianism in the United States on his signature cardboard panels covered in pencil, crayon, gouache and acrylic. The gallery will hold an opening reception for the show on Saturday night at 6 p.m., and is promising a special musical performance on the front porch at 7 p.m.

Rockwall Gallery’s Ryan Rado has organized the latest version of his Low Brow art series, which features paintings and drawings from a wide roster of Nashville’s tattoo artist community. Stop by the Houston Station space and see what nearly 20 artists including Adam “The Kid” Wakitsch, Mia Graffam, Courtney O’Shea, Daniel Hughes and more create when they’re not catering to customer commissions. Stop by and grab a rad drawing or a sick painting, and support local ink artists even if you don’t want to put your own skin in the game. The show opens at 6 p.m. Saturday night.

Before artist Georganna Greene left Nashville to pursue an MFA at Boston University, she had established herself as a unique and valued voice among the city’s strong, broad roster of abstract painters. Greene came home to Nashville in the middle of the pandemic in 2021, and her new display at Red Arrow Gallery represents her last days in Boston and her return to Tennessee. Greene’s new works still mostly read like abstract landscapes, but they feature a more confident hand and a tighter conceptual focus. And the multimedia paintings in Limbic Slang feel more like a cohesive whole than just a display of recent works. Don’t miss this show’s opening reception at 6 p.m. Saturday.

Crawlers who can’t wait to get their feet moving should check out Cameron L. Mitchell and Saran Thompson’s Branches of PoeTree, which was created in partnership with the Nashville Public Library and funded by a Metro Arts THRIVE Award. The pair held community poetry workshops resulting in verses that have been incorporated into visual displays atthe library’s Main, East, Hadley Park and Edgehill branches. Crawlers can follow the poem between the branches in any order they choose while interacting with the project via QR codes. The first 50 participants to complete the circuit will receive a special giveaway. Branches of PoeTree opens on Saturday and runs throughout April, which is National Poetry Month.