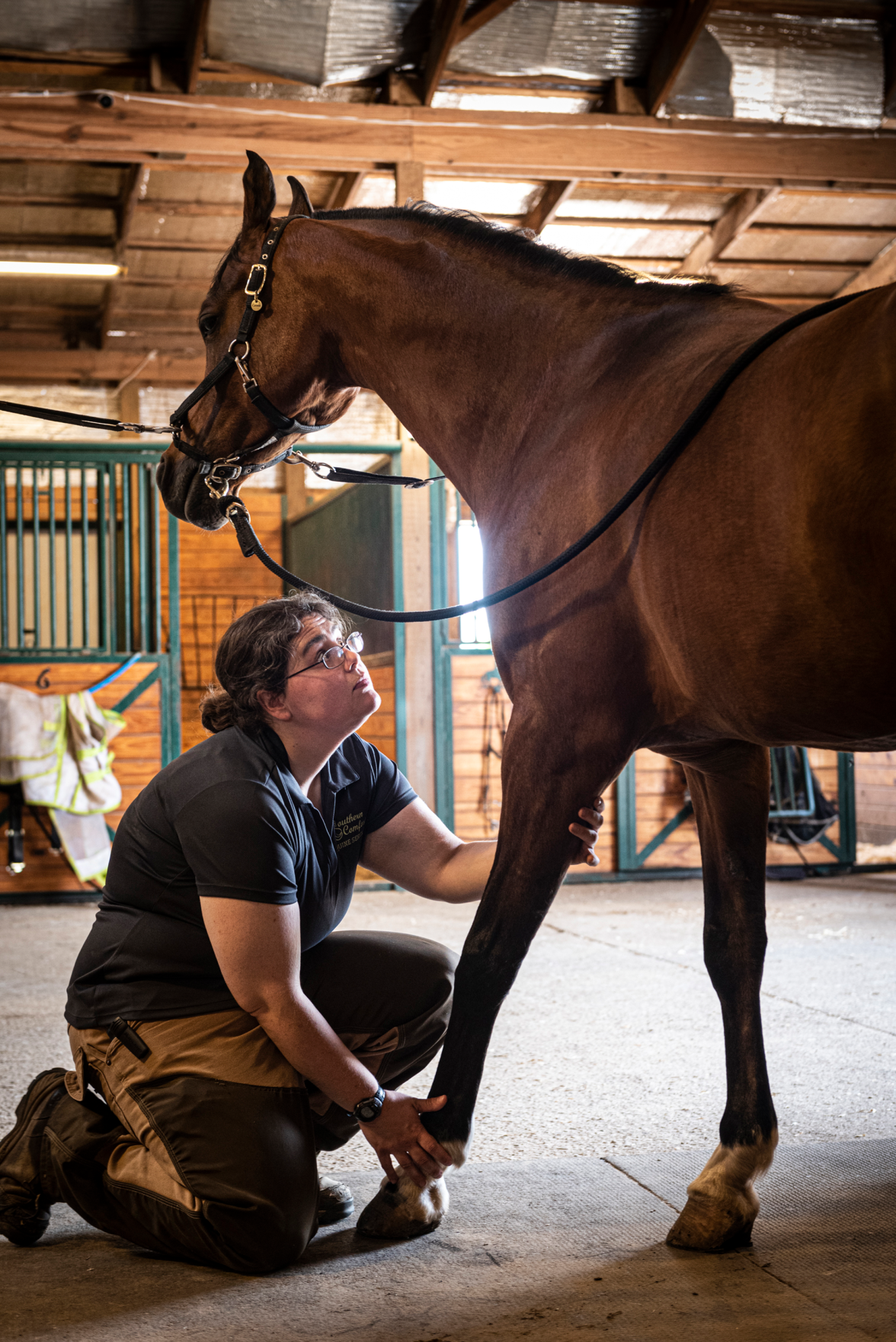 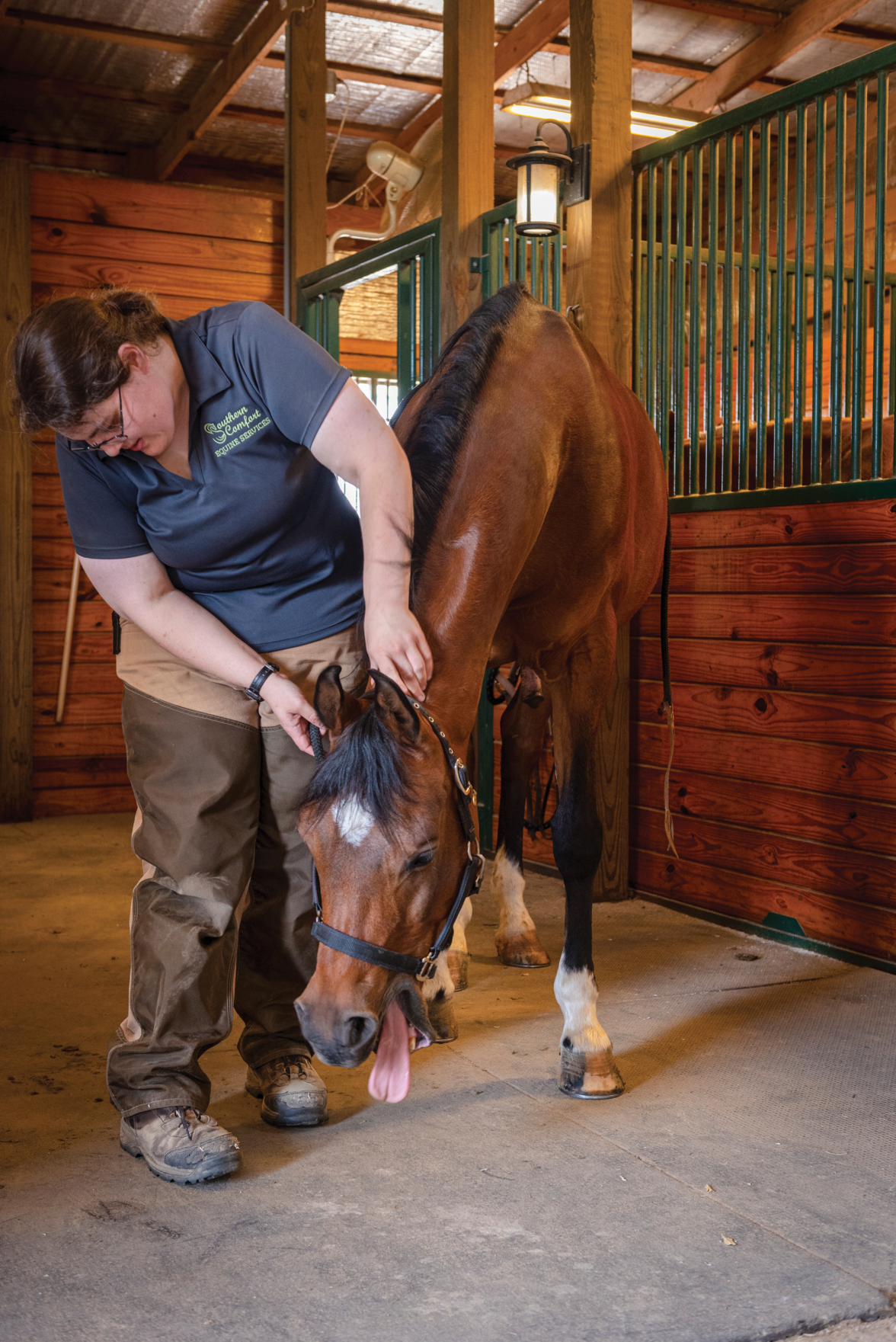 Chelbie Engle arrives at Liberty Run Stables at 6:30 a.m. to meet her clients. They’ve just returned to Portland, Tenn., after competing in a show in Florida. They know her truck, she says, and they crane their necks as she enters the barn. As a certified equine massage therapist, Engle knows horses — what hurts them, what heals them, and what makes them stretch and sigh with relief.

Engle owns Southern Comfort Equine Massage, and she’s not so much a horse whisperer as a horse listener. When the Scene arrives at the stables, Engle leads a gorgeous horse named Crown out of his stall. Crown is an Arabian horse — “one of those hot-blooded horses that has a lot of energy,” says Engle.

She starts by slowly drawing her fingers across what’s called the bladder meridian in traditional Chinese medicine. It runs from the top of the poll — that is, the part of the head immediately behind and between the ears — all the way down and across the body in parallel lines to the rear hooves. Engle watches the horse carefully, observing any twitching, fidgeting or shaking, and listens for whinnies, nickers and snorts. Engle says that horse skin is only 5 millimeters thick — whereas human skin is 8 millimeters thick — and the resulting sensitivity helps her diagnose any tightness or pain the horse is experiencing. Even a change in the horse’s eyes can tell her something important.

Engle works with all sorts of horses: show horses, trail blazers, fox hunters, training horses, racehorses. Even geriatric horses living out their golden years. She also works with Western horses like barrel racers and ropers, although the rodeo crowd has been slower to accept massage than the English riding community. She says that all horses, regardless of breed or discipline, have a hard time releasing tension on their own. “Horses only sleep about 15 to 20 minutes a day that they lay down for,” says Engle. “That’s it. That is the only time that there is zero pressure on that poll, otherwise they’re holding up this giant, heavy body the whole time.” Crown, for example, weighs between 900 and 1,000 pounds.

Engle grew up in Southern Mississippi about a half an hour from the Gulf of Mexico. Getting her first pony was the best day of her life. By 8 years old, she was putting a bridle on it, hopping on via the picnic table and taking off. She studied veterinary medicine and was a tech at a large-animal vet, but the goal was always horses. When a friend said she was heading to equine massage school in Virginia, Engle joined her.

At Equissage International, Engle learned deep-tissue equine massage. Since then, she’s studied acupressure, and it’s her first choice for treating horses. “They feel pain so much easier than we do, and they’re big babies about it,” she says. She runs her thumb along Crown’s spine, using only as much pressure as it would take to fold a thick sheet of paper. “If you push on a horse, it’s gonna push right back. But because I use such a small amount of pressure, they can’t brace against it. The body has no choice but to release it.

“When I first started working on him,” Engle says of Crown, “he had a knot about the size of a 50-cent piece on the right side of his poll. We’ve slowly been able to work it out. He’s been wanting to drop his head and really relax. That’s what you want to see.”

As if on cue, Crown drops his head and sticks out his tongue. Engle laughs and praises him. “I would do this for free if I were independently wealthy. It’s so much fun to see the contentment and the joy that comes over their faces during a massage.”

As Crown enjoys the endorphin rush, Engle explains that what we just saw is called a release. The tongue is like a gateway to the neck, shoulders and chest. It attaches to the hyoid apparatus near the jaw, which connects to muscles that go all the way to the horse’s pectorals and run along the bottom of the belly. A horse with a loose tongue is relaxed and happy. Engle’s knowledge of horse anatomy helps her to know where to apply pressure to release tension. And it’s not always where you’d assume.

Engle says that deep-tissue massage has its place, but she’ll always try acupressure first and observe the results. She’s worked with racehorses who have shaved a full second off their time — which in the world of racing is an awful lot. Other benefits include decreasing joint inflammation, increasing range of motion and improving circulation.

“I love it because you’re able to give back to the animals that give people so much,” says Engle. “Horses, they weren’t originally meant to carry a 200-pound person over fences and chase down a cow. That wasn’t their original purpose. We ask so much of them, and it’s very nice to give back and help them feel better.”