A recent complaint filed at Vanderbilt University calls out Chancellor Daniel Diermeier for potentially violating the school’s conflict of interest policy. The complaint highlights Diermeier’s connections to the fossil fuel industry and his inaction to make these relationships known or recuse himself from conversations surrounding the university’s fossil fuel investment or divestment.

An excerpt of the complaint — which you can read in full at the bottom of this post — reads as follows:

DIERMEIER’S role as Chancellor and Investment Committee member grants DIERMEIER the opportunity to influence the University’s investment decisions in ways that financially benefit his clients and professionally benefit his personal business relationships with them. By not recusing himself from matters related to fossil fuel companies brought to the Investment Committee, DIERMEIER has chosen to maintain influence of University contracts and business relationships in which he has a potential Financial Interest, which creates the appearance of a conflict of interest (“COI”). As defined in Article I of the Vanderbilt University Conflict of Interest and Commitment Policy[,] even the appearance of a conflict of interest is a conflict of interest that demands remediation.

According to a press release from Vanderbilt student advocacy group Dores Divest, the complaint was filed by “a Vanderbilt community member partnered with Dores Divest.” The group’s mission “is to achieve fossil fuel divestment at Vanderbilt University, through both disruptive and non-disruptive means, as a step towards climate justice.” According to the group’s website, Dores Divest has held several protests and demonstrations, created a divestment petition that earned more than 1,000 signatures, been cited in student publication the Vanderbilt Hustler several times and gained the support of former Vice President Al Gore, a Vanderbilt alumnus. A December article from the Hustler explains that Gore, a friend of Diermeier’s, supports the university’s climate change policies but also urges divestment.

The complaint notes several instances that link Diermeier to the fossil fuel industry. In 2020, for example, Diermeier was featured on an executive leadership panel for an International Pipeline Foundation virtual conference. The IPC was founded by energy pipeline industry players, and the 2020 conference was sponsored and attended by pipeline and natural gas companies — though the statement notes that it is unclear whether Diermeier was compensated for his presence or, if so, if that specifically would violate the university’s conflict of interest policy. Diermeier’s curriculum vitae, which is hosted by a Vanderbilt web address, also lists Diermeier’s advisory experience with fossil fuel companies like ExxonMobil, Shell, BP and Nicor, among others.

The complaint also touches on Vanderbilt’ s partnership with the University of Chicago’s Climate Vault Initiative, which reduces carbon emission through a cap-and-trade market, noting how Vanderbilt’s donation was praised on Twitter by an account called @DivestmentFacts. The account bills itself as “an educational project” created by the Independent Petroleum Association of America.

Vanderbilt’s 2021 financial report shows assets in “natural resources,” which the report defines as “illiquid investments in timber, oil and gas production, mining, energy, and related services businesses held directly or in commingled limited partnership funds,” though it does not indicate specific investments toward specific companies.

The complaint says Diermeier has not properly disclosed his relationships with fossil fuel companies despite claiming that the university’s stance is “principal neutrality” on the matter. In a 2021 interview, Diermeier told the Vanderbilt Hustler:

On the specific issue of divestment, the purpose of the endowment is not to be an advocacy tool—the purpose of the endowment is to support our students and our faculty. … We’re going to adopt a stance of principled neutrality on that, so students and faculty can debate the whole issue on whether providing capital to oil and gas companies is a good idea, or whether it would be better to own shares in oil and gas companies and then use shareholder activism in order for them to change that behavior. These are good debates, and I don’t think that universities should foreclose that debate by taking a position on these issues.

Universities across the country, including Harvard and Cornell, have begun divesting from the fossil fuel industry. The Vanderbilt complaint points to Harvard Corporation’s Theodore V. Wells as setting a precedent that Diermeier should follow to avoid a conflict of interest. Wells recused himself from conversations at the school related to divestment because he provided legal counsel to ExxonMobil.

The complainant asks for an investigation from the Office of Conflict of Interest and Commitment Management, a report of the investigation submitted to the Audit Committee of the Board of Trust for “review and approval,” and for the university to share its findings the Vanderbilt community. Additionally, Dores Divest demands that Diermeier cooperate with an investigation, “publicly disclose all details of his financial relationships with fossil fuel clients” and recuse himself from proceedings related to fossil fuel divestment.

“We have received a complaint,” a Vanderbilt University spokesperson tells the Scene. “We have a robust process for assessing potential conflicts and will follow our established protocols as we review the matter.”

Update, Feb. 9: According to a representative from the university, Vanderbilt’s Board of Trust Audit Committee found no evidence of any conflict and that “Chancellor Diermeier properly and fully disclosed all relevant information in the course of the extensive due diligence process related to his appointment.”  The university considers this matter closed. You can read the full statement on Vanderbilt's website. 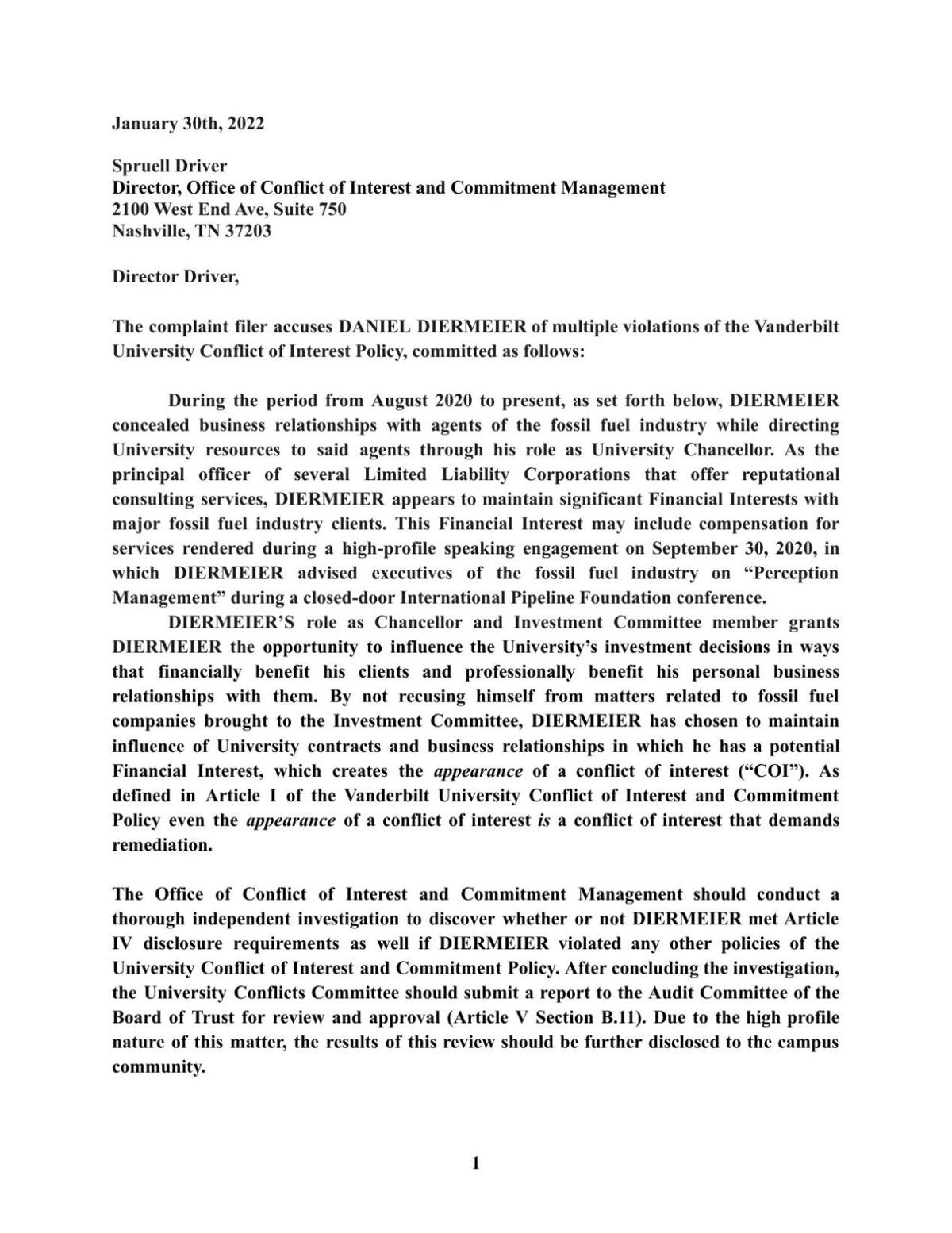