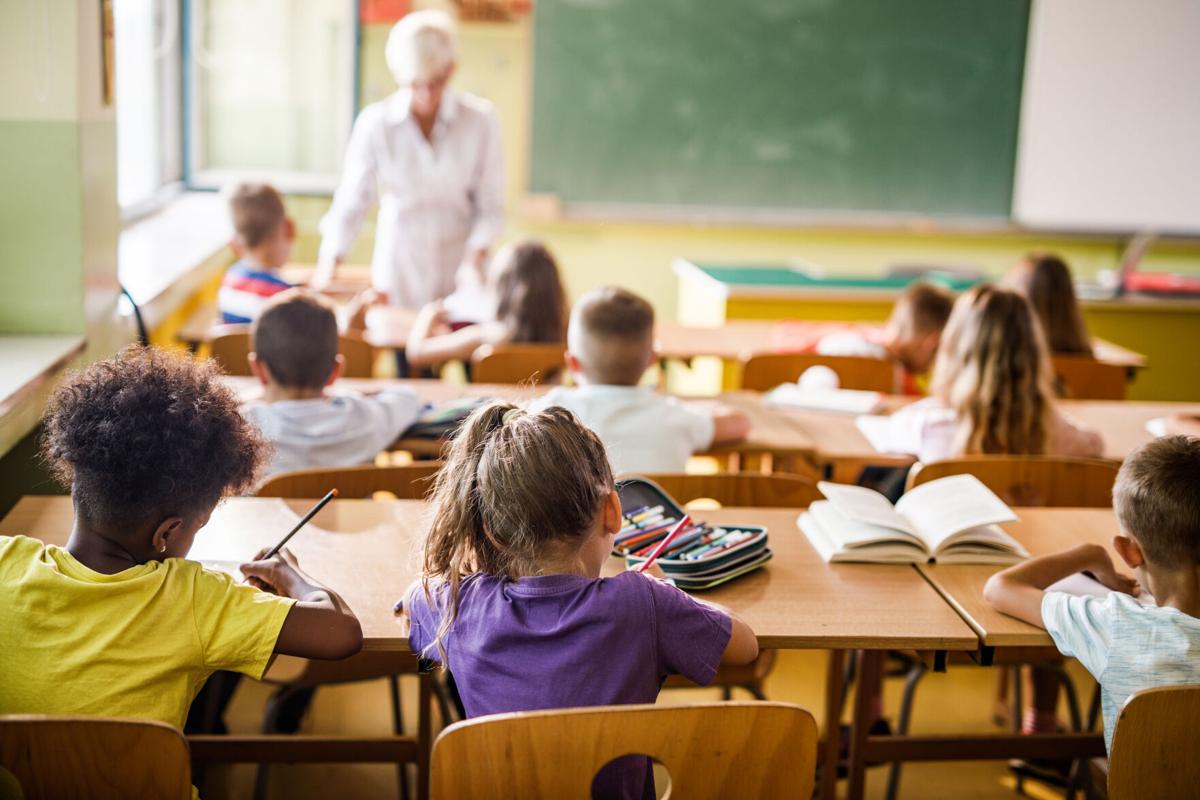 On Tuesday evening, the Tennessee Department of Education released a new education funding formula draft to replace the current Basic Education Program formula. (Read the full four-page draft via the PDF at the bottom of this post.) Since the state announced plans to revamp the formula in October, TDOE has been engaging with Tennesseans by hosting public town halls, soliciting comments and creating a plethora of committees, all to determine what to prioritize.

You can find submitted public comments here and watch footage of the subcommittees and steering committee meetings here. Largely, folks across the state have been requesting more funding in general, as Tennessee ranks in the bottom 10 states in terms of per-pupil funding.

While the subcommittees have met four times by now, the Republican-led central steering committee has only met once, with a "tentative" plan for two more meetings Jan. 13 and Feb. 3. The goal of the process is that public comments will filter through subcommittees, which will make recommendations to the steering committee, which will then help inform legislation; the second year of Tennessee’s legislative session began Tuesday. The state has extended its feedback period from Jan. 14 to Jan. 18 to give folks time to respond to the new draft. Comments can be sent to tnedu.funding@tn.gov.

The new draft breaks down the state’s reasoning for a new formula, its goals and considerations for allocating money. “Aligned with best practice, Tennessee’s new funding formula for K-12 public school students would incentivize strategic and efficient spending to accelerate student achievement and support a more thoughtful allocation at the local level,” reads the draft. It also notes “what must be different in a new formula for Tennessee,” including: Strategic for all students (student-based; funding students not systems), easy to understand, sustainable, outcomes-driven and flexible.

The funding framework itself is based on four categories: base, weights, direct funding and outcomes. Though it adds additional support, transparency and clarification, the draft also notes that everything currently funded in the BEP is accounted for in this new formula.

The base of the formula lists basic operating costs for districts, like salaries for teachers, nurses and counselors, academic interventions for struggling students, technology, “Coordinated School Health” and “district-specific needs.”

The next-largest portion of the formula would be student weights, which would allocate extra money to districts based on the additional costs it takes to educate certain students, such as those from low-income backgrounds or those with disabilities. The heaviest weight goes to impoverished students to “accommodate the needed services to prepare them for academic success.” Moderate weight is given to rural students who “may see higher costs for services like transportation or local services that do not receive the same benefits from economies of scale.” Students with unique learning needs would see varied forms of weights; these students include English learners and gifted and differently abled students. Finally, a light weight would go to charter schools, which would augment costs that are allocated to renting school buildings from local districts so that students can maintain in-class support and resources.

The proposed formula would also allocate to districts that are “fast-growing,” along with money for tutoring services and  college, career and technical education. Money would also be allocated based on school outcomes that “would provide a per-student bonus for performance. The current recommendations for consideration would apply to all students but include additional weight for economically disadvantaged students.”

Other funding considerations that have been prioritized by subcommittees include additional support for K-3 classrooms, universal pre-kindergarten for 4-year-olds, career coaches and increased salaries for those who work in schools but do not teach.

The new draft also puts an emphasis on “transparency, accountability and reporting, [which] are limited under the existing formula for funding.”

Tonight at 6:30, Metro Nashville Public Schools will host a town hall in partnership with TDOE regarding education funding in the MNPS boardroom (2601 Bransford Ave.). Nashvillians can share their thoughts with state education leaders — each person will have two minutes to speak and can sign up to do so at the meeting. It will also be livestreamed through the Metro Nashville Network. 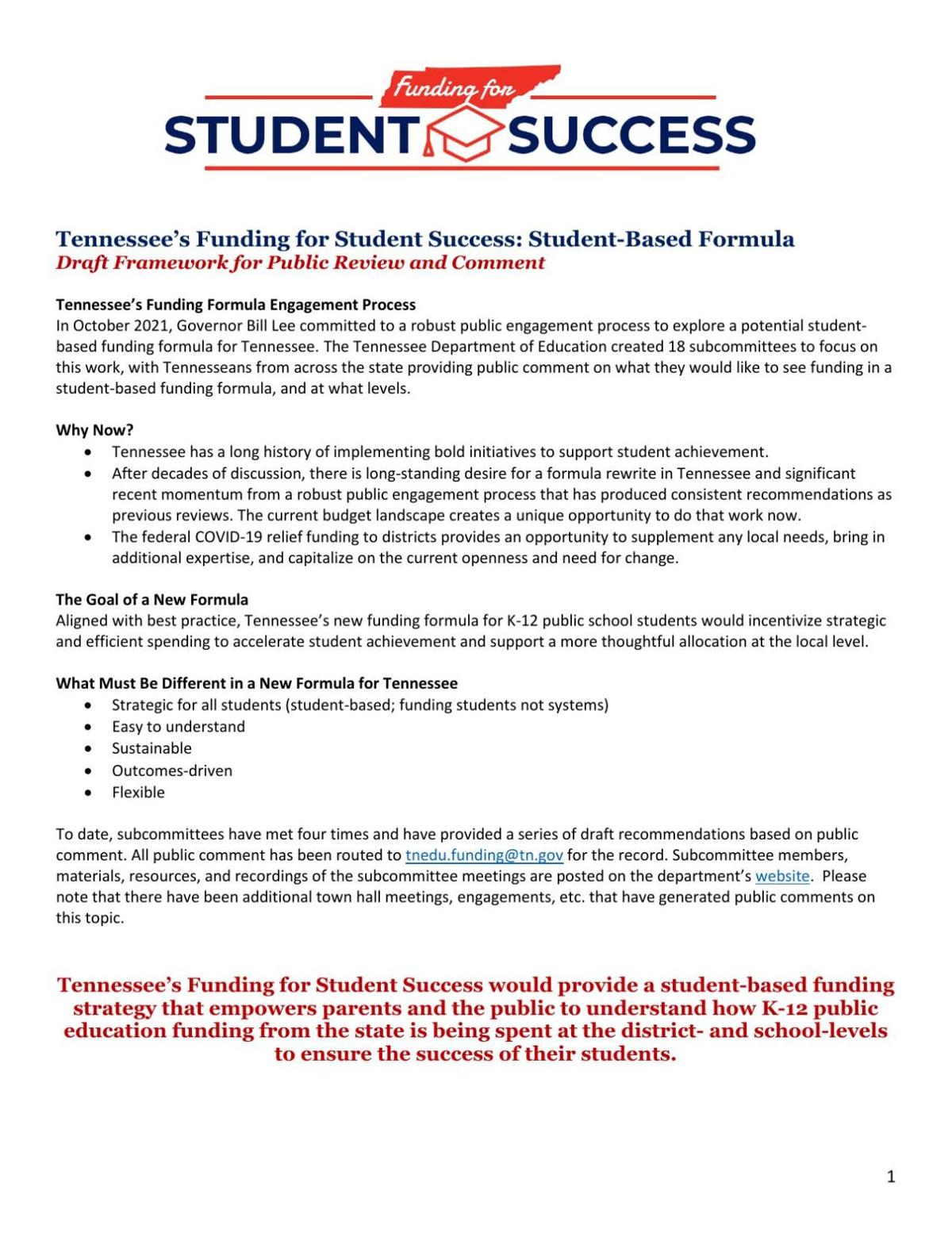