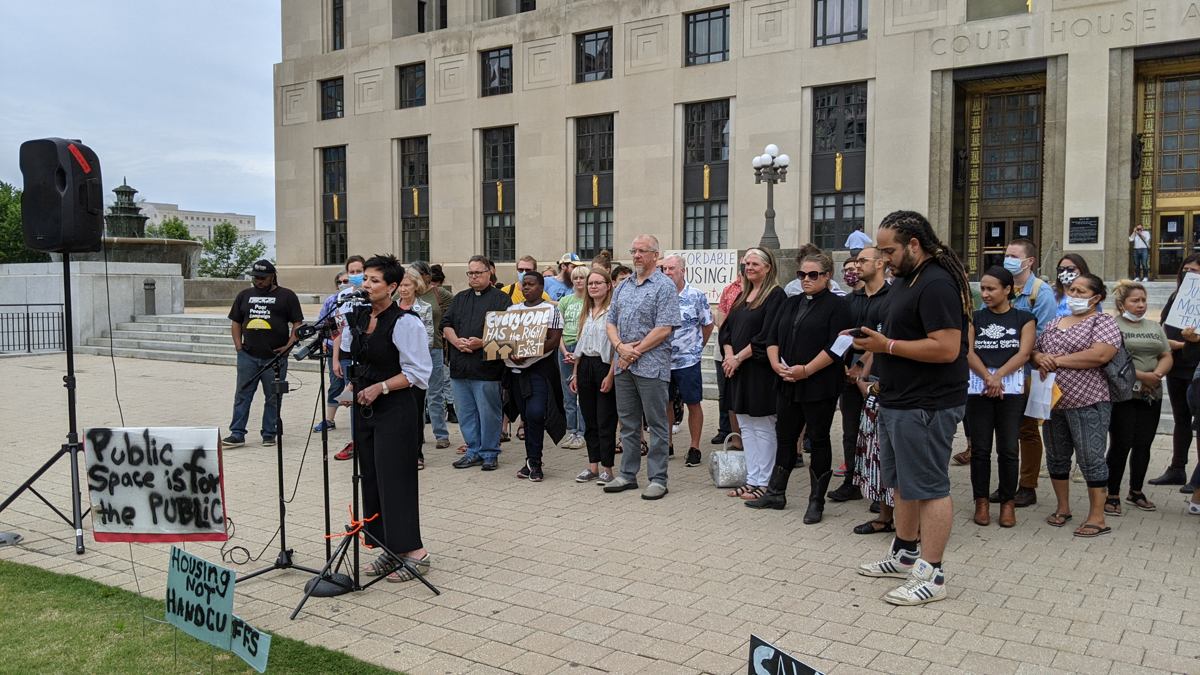 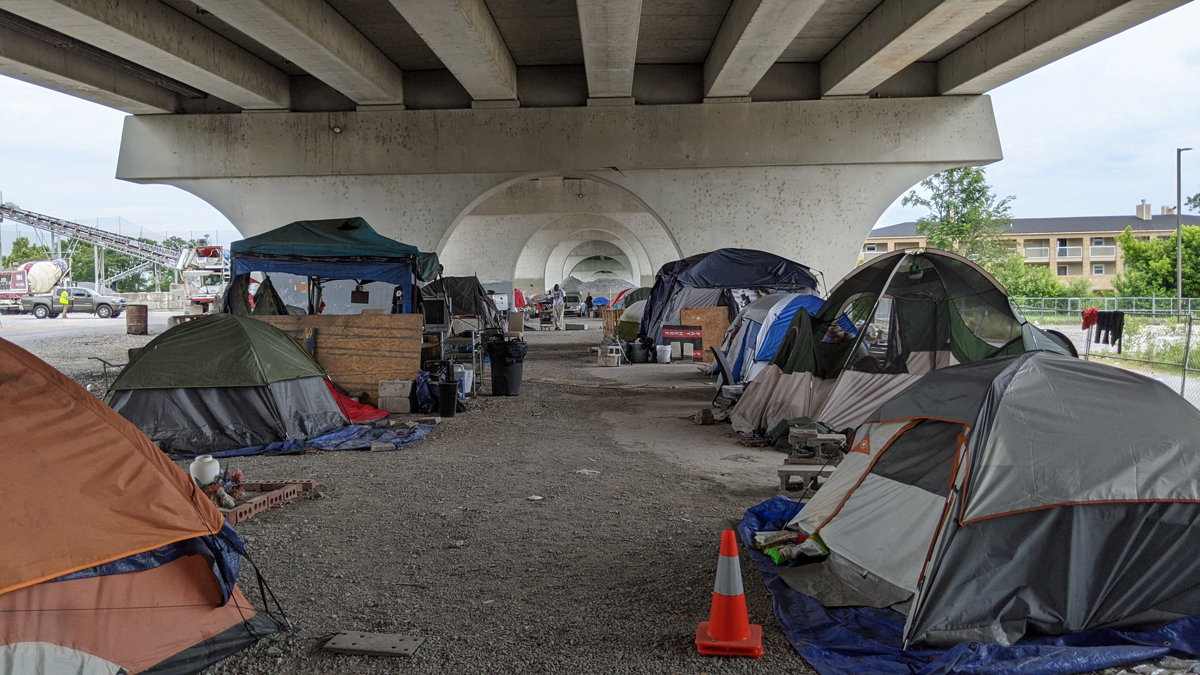 The camp under the Jefferson Street Bridge as of June 1

On Tuesday afternoon, advocates for people experiencing homelessness and other community organizers held a press conference to speak out against Metro’s decision to close the encampment underneath the Jefferson Street Bridge. The closure was planned to take place on June 1, but as of this writing, it has not occurred. Open Table Nashville, a nonprofit that works with the unhoused community, organized the event.

Edward Kehoe, an outreach worker for Open Table, read a list of demands from residents of the camp. The list included the return of porta-potties that were installed early in the COVID-19 pandemic, a non-police presence to help with safety issues and direct communication with the city about the camp’s future.

Kehoe also read a statement from the residents: “Our ability to camp under the Jefferson Street Bridge will not change the fact that we are homeless regardless of the camp's future. We will need a safe, stable place to exist. Closing the camp before this will not be responsible.”

Also speaking at the event was Candy Christmas, founder and CEO of The Bridge Inc., which began as a ministry serving the camp.

“I would like to be able to continue to serve the poor, to serve the homeless under that bridge,” Christmas said. “I feel like it's a very important spot for the working poor and the homeless to come and to receive resources of food, life-sustaining resources for their families and for themselves.”

Christmas later told the Scene that while she heard about the city’s plan back in March, she was not able to get an audience with Mayor John Cooper’s office until this week. She said the conversation went “very well” and that her organization was able to explain issues Metro officials might not have considered. For example, according to Christmas, the city said The Bridge could continue food and prayer services at a local church instead — but if those churches have schools or day cares, notes Christmas, then some members of the camp who are sex offenders might not be allowed on the premises.

If the encampment closes, it could mean that Christmas' organization loses a consistent place to provide resources to people experiencing homelessness. For now, The Bridge will continue to return to the site.

“We haven't stopped serving through the pandemic, through the tornado," she says. "We've never missed a Tuesday. We're still there, and I'll be there tonight. I'm not going anywhere.”

Other speakers included two people who have experienced homelessness. Clarissa Hayes had volunteered with The Bridge before finding housing herself, and said it still hurts to see people struggling under the Jefferson Street Bridge. Howard Allen described himself as “an alumnus of the Jefferson Street Bridge,” telling the crowd he got married there. He acquired housing in January but says he won’t forget the people he knows who still stay at the site.

Organizations that don’t directly work with the homeless were also represented at the press conference. Theeda Murphy of the People’s Budget Coalition — a group that wants the city to fund housing, public spaces and community programs rather than policing — also spoke, linking the conference to the public budget hearing set to take place Tuesday evening.

A tenant from the Mosaic Apartments also spoke at the press conference, relaying her own struggle to stay in place. In late May, about 90 families at the complex received notice that they had just three days to move. They organized and protested the decision, and while the apartment management later gave them 14 days and $1,500 to find new housing, tenants are still saying that's not enough time or money to find a new place to live.

Advocates with Open Table have been posted at the Jefferson Street Bridge. Representatives from the group told the Scene that about 20 people were there as of Tuesday morning. Police have been in and out of the campsite talking to residents, but no one has been forcibly removed from the camp.

As of Tuesday afternoon, more than 20 tents are still present beneath the bridge, but not all are currently occupied. Advocates with Open Table note that people often come and go from the camp, and many of them have jobs.

“We don’t choose to be here,” camp member Steve Clemmons tells the Scene, speaking outside his tent. “We choose to be in a house.” Clemmons has been at the camp for eight months along with his girlfriend and their cat.

Asked about the closure, Clemmons wonders aloud, “Where are we gonna go?” He doesn’t have a car to transport his belongings or the money to find an apartment. He says he's been on a housing list with Salvation Army for four months but doesn’t feel confident that housing will be secured anytime soon.

Another man sitting underneath a canopy says that people “are just waiting.” The man isn’t a current resident of the camp but has stayed there before; he was expecting to help people move their belongings — but so far, no one is leaving.

Spokespeople with the mayor’s office and the Metro Nashville Police Department previously told the Scene that most residents of the camp have been connected to a housing navigator and that Salvation Army has been part of their outreach efforts. MNPD added that there were no plans to enforce the closure with arrests. Both the mayor’s office and MNPD cited safety concerns — including the safety of members of the camp — as part of the reason for closing the camp.

The mayor's office sent a statement to the Scene saying the city is "not content to let our unhoused neighbors live under a bridge or anywhere they’re exposed to extreme heat and other dangerous conditions — especially not when we have an infusion of federal dollars to help encampment residents with alternative housing solutions."

Our purpose is to find stable housing for every person living in the Jefferson Street bridge encampment. The population is currently down to 10 to 15 people per day. To date, nearly all of them have accepted Metro’s offer to find them a safe, healthy place to live through the work of our housing navigators.

We’re also helping nonprofits that serve our neighbors in the encampment area find other indoor facilities nearby that offer more sanitary conditions for the important work they do, including bathrooms and commercial kitchens.

We recently launched a new campaign to recruit landlords to participate in our rehousing work so we can house even more Nashvillians. And in the last six months alone, we’ve housed over 300 residents.