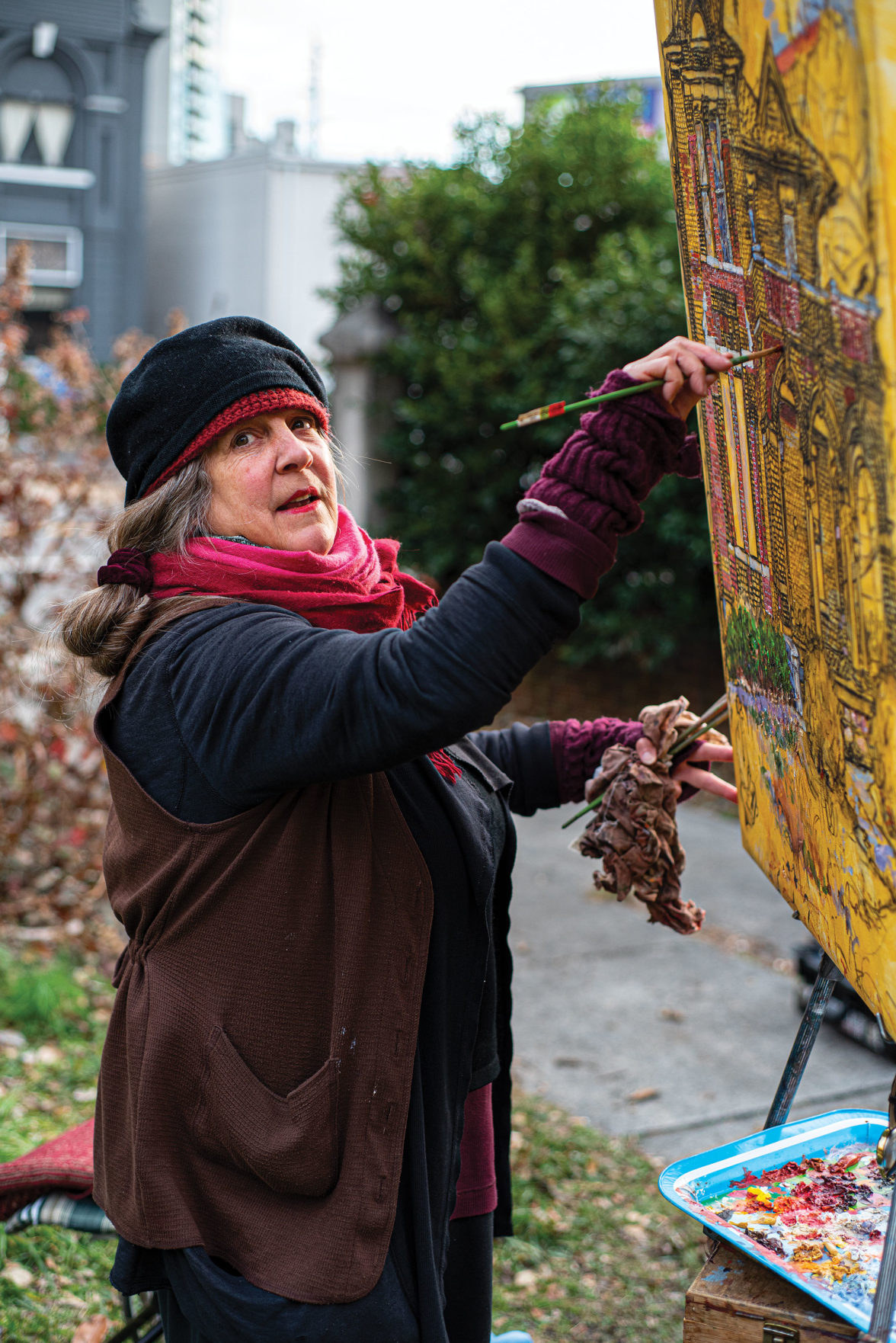 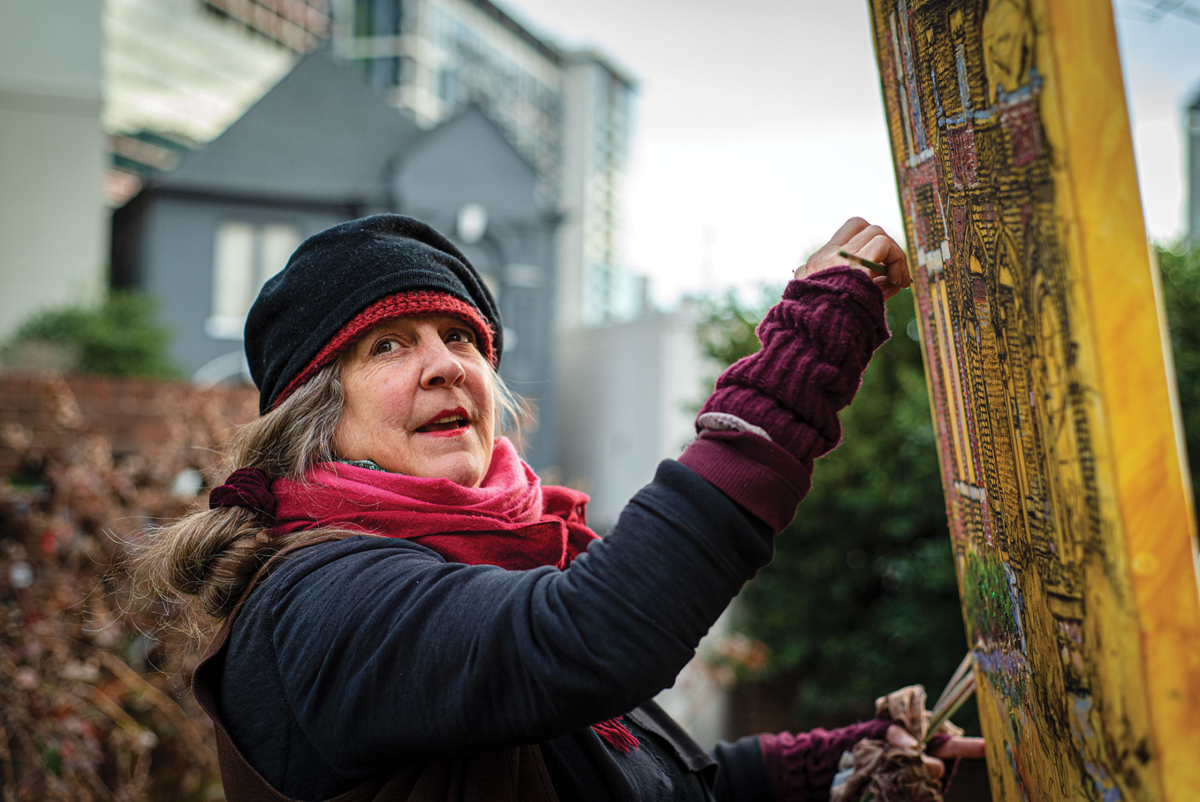 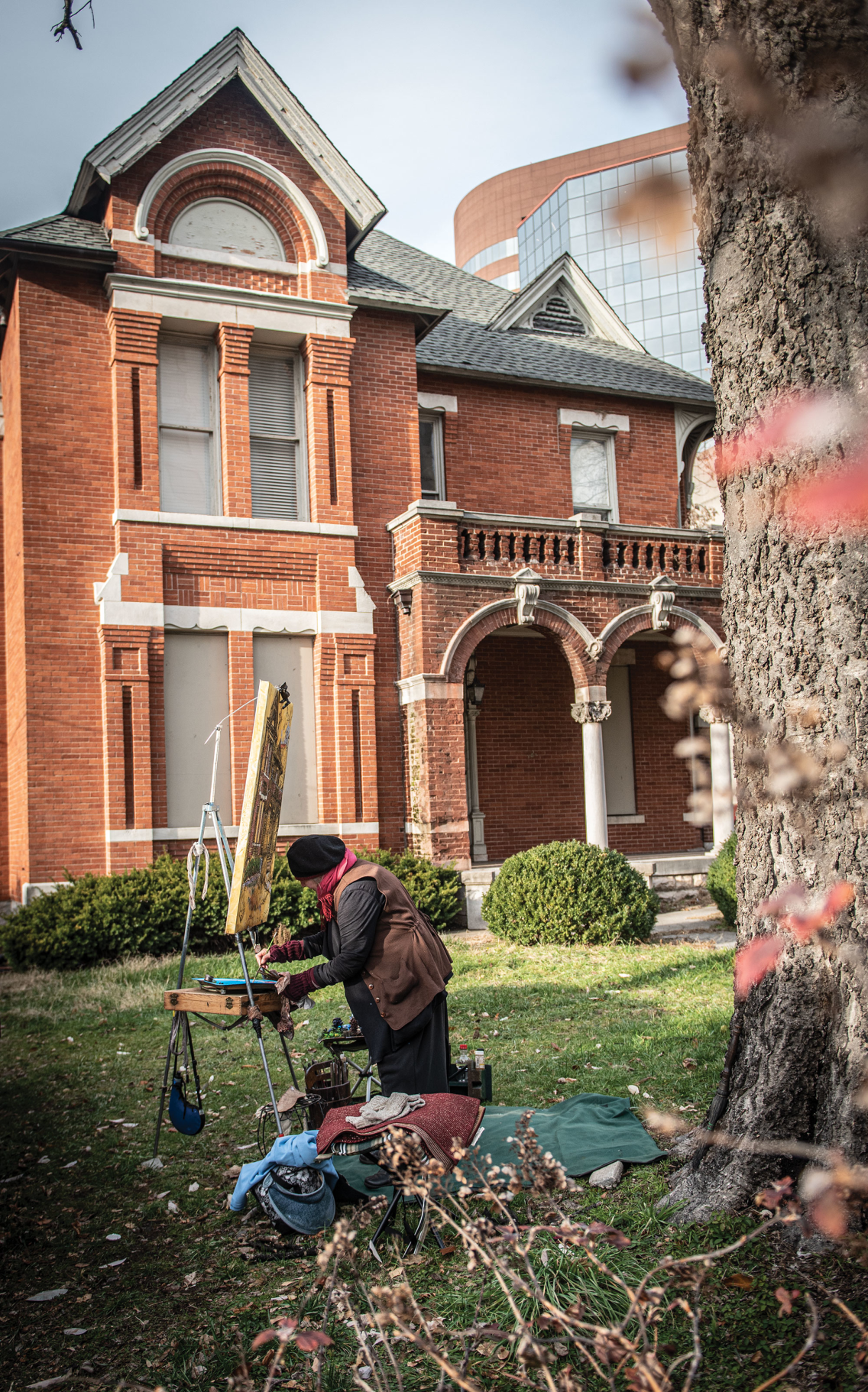 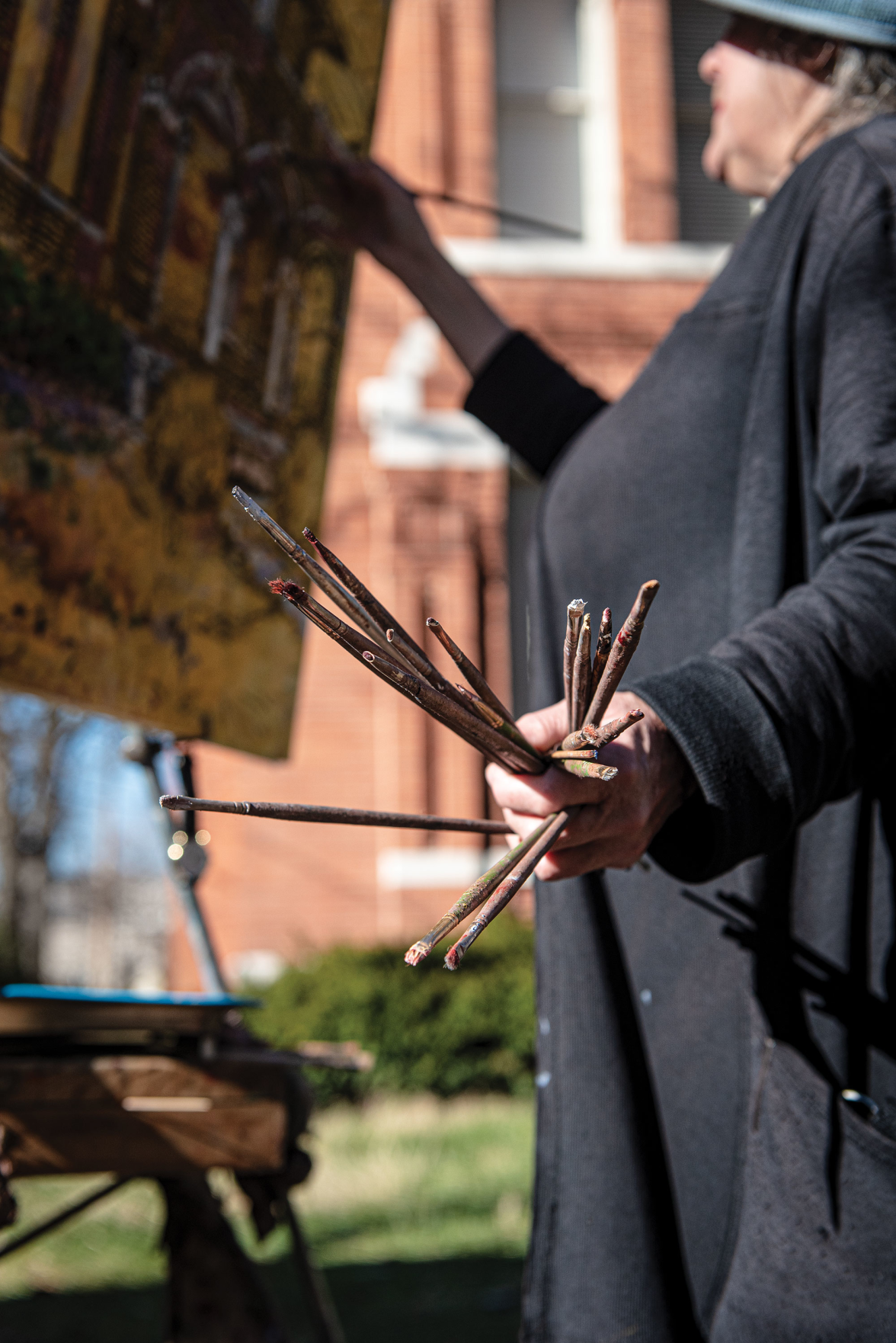 When Peggy Snow shows up with her easel and oil paints outside a Nashville building, that building isn’t long for this world. Think of her as a sort of architectural angel of death.

We meet up to chat at a beautiful hilltop spread near Radnor Lake. It’s the home of Snow’s friend and patron, and she’s brought some of her work for me to see. She has set her paintings out in a large room — along the floor, leaning up against a couch, on the window sill. The room feels like a makeshift memorial. These are portraits of fallen buildings, the collateral damage of a booming city.

I see some buildings I recognize. There’s 26 Music Square E., a 111-year-old cobalt-blue edifice on Music Row with an awning that stretches out to the sidewalk. Its last incarnation was a bar and restaurant called Figlio’s, but it was best known as a bar called Sammy B’s, a favorite of music-industry types back when Music Row had bars. The building was torn down in 2017 after remaining vacant for seven years.

There’s 2010 Belmont Blvd., better known as the much-beloved International Market and Restaurant, founded by late immigrants Win Myint and his locally beloved wife Patti. That building met the wrecking ball earlier this year, though a new incarnation of the restaurant is reportedly on the way.

Later, Snow shows me 1912 Broadway, better known as J&J’s Market, a deli and coffee shop I sometimes worked from when I first moved to Nashville in 2010. It was one of the few spots in the city with a real newsstand, which endeared the place to me. I knew it had closed. I didn’t know it had been torn down. Her rendering of it brings on an unexpected wave of nostalgia.

Snow also painted 1922 Broadway, just down the street from J&J’s. That 108-year-old, red-bricked Queen Anne was once home to the studio and boutique of Manuel Cuevas, the well-known longtime fashion designer whose embroidered, rhinestone-embossed garments have adorned Nashville performers from Johnny Cash to Jack White.

“I’m drawn to the gravity of the Old World,” Snow says. “I like things that were built by hand, by masons and carpenters and bricklayers. I like a building that has settled and sunk into the earth, to the point that it just looks like it grew there.”

Snow was born in Nashville, but her family moved to the Memphis area before she started school. She’s been painting since she was in grade school and says she was always drawn to abandoned and decrepit structures.

“As kids, we’d roam the woods, barefoot and unsupervised,” she says. “We’d play in fields, barns, an old graveyard. I always remember seeing beauty in buildings that had been left to fall.”

Snow returned to Nashville in 1981 while she was in her early 20s to pursue an art career. “At the time, I think a lot of Nashville gallery owners were defensive. They were trying to prove they weren’t hicks. So much of the art in the city then was cold and over-thought. That wasn’t me, so it was hard to find support.”

Snow went to Germany in 1986, and there she grew fond of German Expressionists like Otto Dix. “I guess I can’t say that’s an influence, because you don’t see much of it in my work, which is much more influenced by Van Gogh or Cézanne,” says Snow. “But I loved the dark, satirical stuff. The hard-hitting art.”

While in Germany, Snow says she was drawn to a 500-year-old fachwerk home that was rented out by some young activists. “This was right after Chernobyl, so they had put out this protest sign that said ‘Sleep Germany, Sleep.’ It was based on a German lullaby they had co-opted to protest nuclear power. I went back to Germany in 2001 and painted it again. But then a couple years later, they tore it down. They never tear down those old buildings. I almost felt like I doomed it when I painted it.”

Snow often paints a building after it’s slated for demolition, so perhaps a better comparison is to a Victorian-era death mask artist. As with a death mask, Snow’s paintings don’t depict buildings in their prime — when they were, say, buzzing with young apartment dwellers, welcoming hungry college students or rowdy with half-lit session musicians. Her paintings show cracked mortar, dangling caution tape and, typically, a piece of wrecking equipment lurking around the edges like a rust-bitten Grim Reaper.

Snow’s canvases can be deceptively chaotic. Up close, they’re a swirling, highly detailed, Impressionist-inspired frenzy. And yet from further back, the finished product feels dignified — a fitting send-off to structures lost to time. Like the Impressionists, Snow is moved by the natural world. The first buildings she painted were rickety barns and ramshackle sheds she found in the woods. She still paints nature, but it often seems to be encroaching on the man-made world instead of the other way around. With whirls of organic greens and browns, crabgrass and gnarly-barked trees frame crumbling facades, fallen archways and buttresses more flagging than flying.

Snow says she always paints in person, never from a photograph. “I’ll typically spend quite a long time surveying the structure to make sure I capture an angle that brings out the building’s character,” she says. Then she sets up and starts painting, right there in the open air. Since she can’t paint from the street, she often sets up quite close to the building itself. That perspective can sometimes produce a fish-eye effect, putting the viewer nearly at the building’s threshold. It conveys a sense of urgency, one that Snow says she often feels when she’s working.

“Sometimes I won’t hear about a demolition until a couple days before it happens,” she says. “So I’m rushing to get the painting done before it comes down. Sometimes I’ll work for 12 hours straight or more, because I’m afraid if I leave, the building won’t be there when I get back.”

Her latest project is the Warren House at 1812 Broadway, once home to Atlantic Records. Snow had shown me the painting, still half-finished. A few days later, she sent me a text: “They are dismantling the porch and balustrade!” As she often does, she tried to persuade the demolition crew to work with her. “They are friendly and open to communication,” she writes, suggesting that, as she has in the past, she might persuade them to hold off until she has finished her painting.

Snow says she isn’t opposed to progress, but she does lament the dwindling number of public spaces. “We used to have more places, spaces where people rubbed elbows and kept up on one another’s lives,” she says. “Now we keep up on cellphones. We only use buildings to sleep, to work and to buy things. We’re closed in, and we view one another with suspicion. We’re so divisive now. I think the disappearance of common areas has a lot to do with that.”

Snow says she’s actually made a lot of friends while out archiving the buildings she says once provided those spaces. “I meet homeless people, who I’ve put in my paintings. Some of the best exposure I’ve ever gotten was when I put up my easel and started painting the Jacksonian apartment building before they tore it down.”

That project also won Snow a lot of local press. The Tennessee State Museum later bought a couple of her paintings, making her the city’s unofficial visual archivist of buildings past.

About 15 years ago, while out painting a building slated for demolition, Snow met a man named Bill Suave. The two became unlikely friends. Suave is blue-collar and plainspoken, a salt-of-the-earth sort of guy. The oddest thing about their friendship is what Suave does for a living: He tears buildings down.

“I’ve been doing it for 40 years,” Suave says. “Sometimes I’ll use a backhoe. Sometimes an excavator. Sometimes a bulldozer. It depends on the building. Depends on what the job requires.”

Over the years, Suave personally had a hand in destroying many of the buildings Snow captured on her canvas. “I couldn’t even tell you how many,” he says. “But if she painted it, I probably demolished it.” At times, Suave has worked with Snow to hold off on a job until she finishes painting. “I remember one where I couldn’t put it off anymore,” he says. “So I tore down the back side while she painted the front.”

Since then, Suave has bought two of Snow’s paintings. She in turn has painted him into one — he’s standing next to an excavator that looks as if it’s about to eat a one-story office building along Eighth Avenue South.

One building Snow regrets never painting is Fond Object, the quirky East Nashville business that was part music venue, part record shop, part vintage store and part petting zoo. It was a weirdly delightful place, replete with scores of records, as well as a pair of goats and a pig named Dottie. I imagine it would have been fun to paint. It and the businesses around it were torn down earlier this year.

“Oh, I loved Fond Object!” Snow says. “I’m in a little folk band [The Cherry Blossoms], and we used to play there. But by the time I heard about it, they’d already torn it down.”

About 80 new people move to Nashville each day. Those people need places to live, work, sleep and play. Consequently, the city is fast outgrowing its infrastructure in many places, and its face changes almost daily. That’s a lot to ask of a death-mask artist.

“The buildings are falling so fast,” Snow says. “I can hardly keep up.”