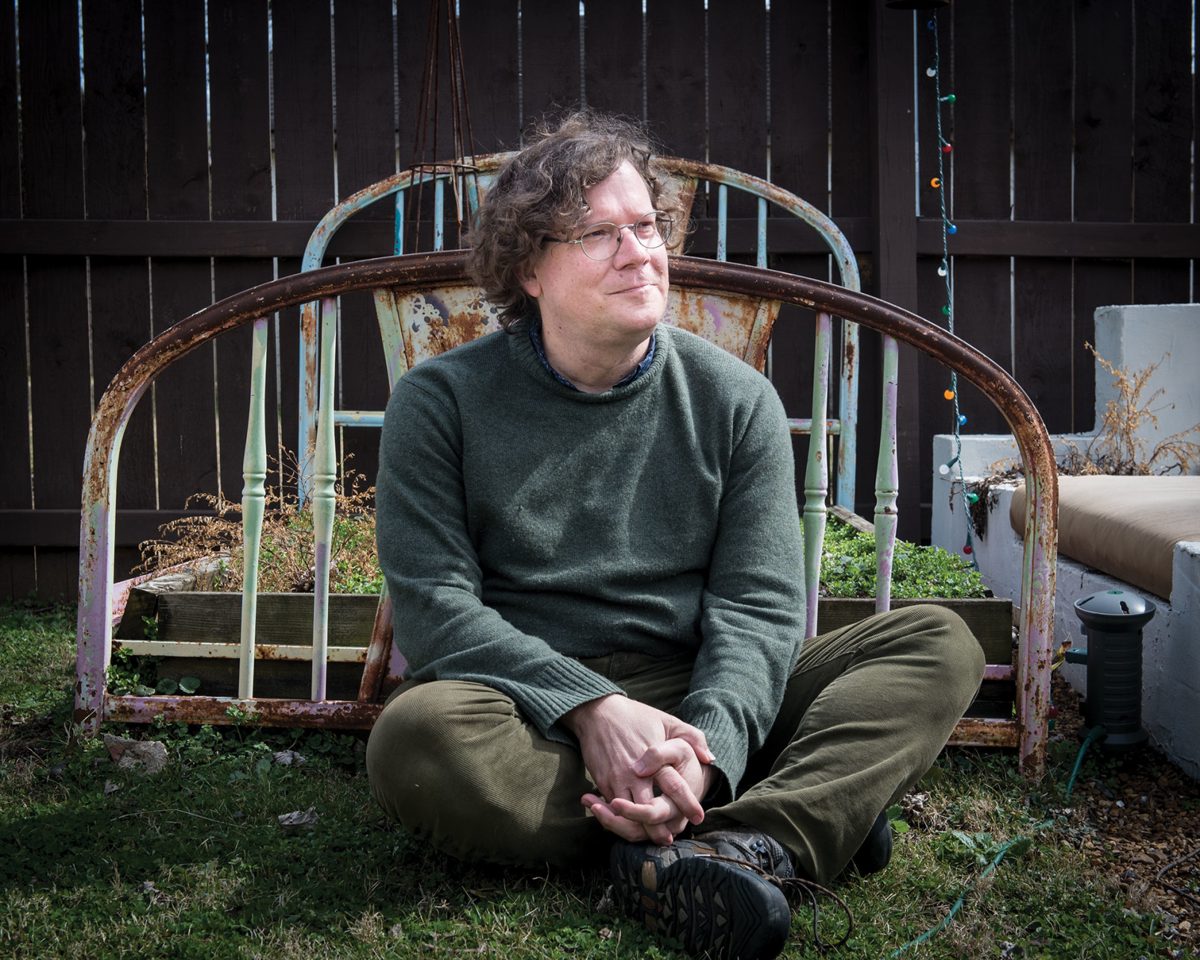 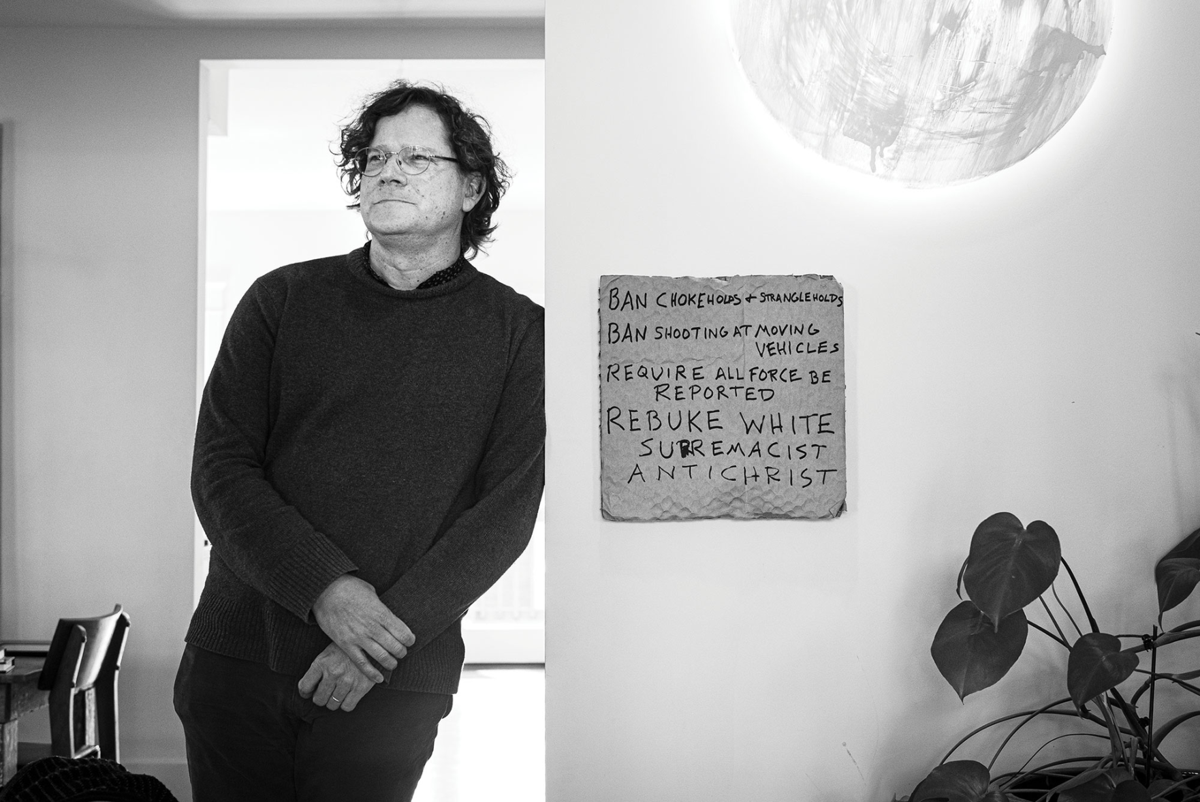 Not five minutes have passed during a visit with David Dark at his 12South home before he offers a cup of coffee and references The Simpsons, Radiohead, The Matrix and the Book of Revelation in the same sentence. The joy in his voice — and the smirk on his face — reveals his love for this sort of intellectual mischief. For Dark, a 51-year-old Belmont University professor, author and very active Twitter user, the goal is to recognize that there are no real borders between religion, politics and culture. The truth, he says, is that they’re all part of the same stew. And it’s more fun that way anyhow.

“I think [Marshall] McLuhan and Shakespeare and William Blake and the prophets help us see that culture is all the time, and everything all the time,” Dark says. “And a phrase that I sometimes use as well is ‘one human barnyard.’ If you want to say: ‘Jimmy Fallon, stay out of politics. Donald Trump, stay in your lane.’ Too late. There are no lanes. We are all mattering in one way or another, we’re all lifting our voices, broadcasting, in one way or another. So reality is interdisciplinary, and human expression does not fall into the pockets or the compartments that we use to avoid despair.”

He emphasizes the point with a recent example.

“A man who once body-slammed Vince McMahon on camera commandeered the birther movement for his own reasons, and then assumed control of the Republican Party, which he still has, and then for four years commanded the United States military,” Dark says. “Our desire to compartmentalize what happened does not serve grasping what happened or what is happening.”

Twitter, where the silliest thing you might see all day often sits beside the most profound or the most tragic, is a perfect platform for someone like Dark, who insists we can find the sacred or the profane anywhere. If you scroll through his feed, you’ll see him deploying aphorisms like “There are so many ways to love God,” or conversely, “There are so many ways to hate God,” to make this point.

“Nashville is driven by marketed God talk, and there’s a power play whenever God comes in,” he says. “And I think of that as using God’s name in vain. When I say, ‘There are so many ways to love God,’ and I’m referring to a literacy program or feeding people or the vaccination, I’m trying to take back God from people who think that they’re tighter with God because they believe in God.”

The word “gospel,” he notes, simply means “good news.” Dark has spent the better part of his life arguing that “all good culture is gospel.” A lifelong Nashvillian who grew up in the Church of Christ, he says he was forced to make an argument for the things he loved. At home he was enthralled by The Twilight Zone and Star Trek, while at church he was met with questions about whether he should even watch television at all.

“I didn’t think that which was marketed as ‘of God’ was any more or less ‘of God’ than Prince or Public Enemy,” he says.

This sort of “good news” from unauthorized sources led Dark to reckon with the ideas he inherited. He attended Franklin Road Academy, which he notes was originally a segregation academy — “It was more than that, but it was at least that,” he says. That is where he started to learn that we can’t escape our history.

“I hesitate to even say it, but I guess I will,” he says. “At FRA you can find pictures of my homecoming dance when I’m 17 years old, and there’s a Confederate flag right behind me. I thought nothing of it. I saw Spike Lee’s Do the Right Thing and I began to think something of it.”

Dark’s phrase and oft-used hashtag for describing the Trump era and the forces at play throughout it is “White Supremacist Antichrist Poltergeist.” He feels that term “does more than ‘Christian nationalism’ and ‘white nationalism’ in terms of getting to the bottom of a spirit that controls things.”

For Dark, Twitter is a way to lob rhetorical bricks not at other people but at faulty categories or cones of silence. He is a dedicated advocate of Reality Winner, the former intelligence specialist imprisoned for leaking classified materials to The Intercept in 2018. In Winner, Dark sees “a decorated veteran, Christian who has been muzzled by our government for almost four years,” and someone who has few advocates because she does not fit neatly into anyone’s preferred box.

It’s that affinity for people that are hard to classify that drew him to the subject of his forthcoming book for the University of Texas Press. Explain All These Controls: U2 & the Inner America will be, he says, “an argument for U2 as a gift to the species.”

Dark confesses some discomfort with praising a multimillionaire like Bono and acknowledges that U2’s refusal to quit “has made them insufferable to so many.” At the same time, he says, “I also know that I owe a lot of my own moral literacy to what they’ve been laying down.”

It’s a perfect subject for an intellectual explorer like Dark, who believes the actions of a church can be profane, just as a sci-fi novel or an album from an ’80s rock band can be sacred. The good news is everywhere, if you’re open to finding it.