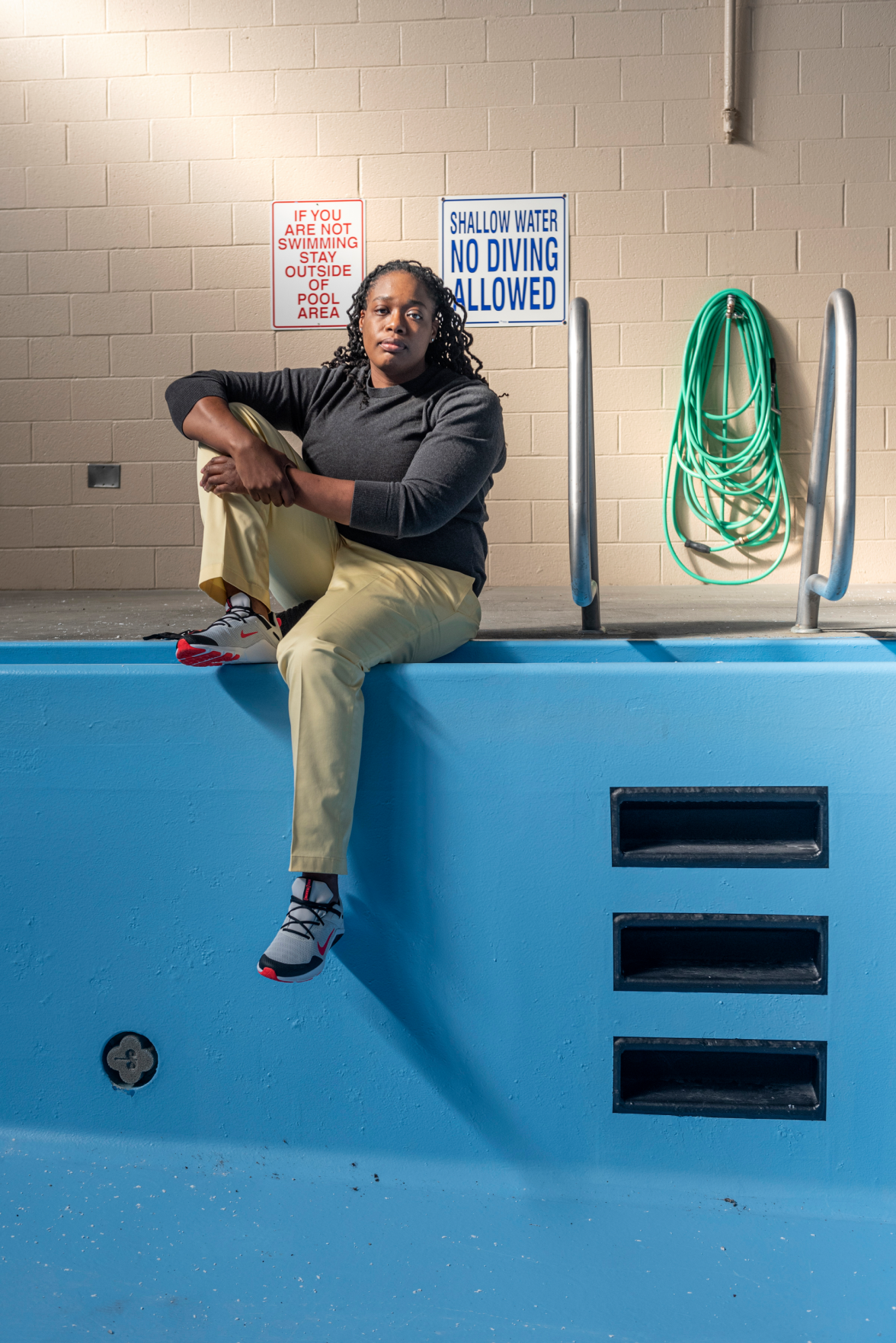 Odessa Kelly is greeted like a celebrity at the Napier Community Center. The kids playing basketball in the gym call out to “Miss Odessa” and run over to give her fist bumps. Adult supervisors offer hugs.

It’s been more than a year since the 39-year-old left her job at this Metro facility to serve as the full-time executive director of Stand Up Nashville, a community engagement and social justice nonprofit organization she co-founded. But “Miss Odessa” is still a familiar face at the community center, and she says the kids who use that nickname are the ones who inspired her to take her next step: running for Congress against longtime U.S. Rep. Jim Cooper (D-Nashville).

Kelly announced her primary bid Monday morning with the backing of Justice Democrats, the national organization that helped elevate “The Squad” — a group of left-wing insurgents including Alexandria Ocasio-Cortez and Ayanna Pressley who won election to the House of Representatives in 2018. Kelly is Justice Democrats’ first endorsed candidate for the 2022 cycle.

“There’s a new generation of Democrats who are coming up from the bottom of the party who are younger, more diverse, more progressive and have public service or community leadership experience, and we need more in Congress,” says Waleed Shahid, a spokesperson for Justice Democrats. “She is the exact kind of person we need to see more of in the Democratic Party and in Congress.”

Shahid says Justice Democrats will provide small-dollar donor and volunteer infrastructure and, perhaps most importantly, “a progressive seal of approval.” All of that, he says, is necessary to help Kelly take on “a dynasty” — Cooper is the son of a former governor of Tennessee and the brother of Nashville’s current mayor, John Cooper.

Progressives in Nashville have been organizing on Jim Cooper’s left flank since before his 2020 re-election. Then, allied organizations supporting initiatives like the Green New Deal and Medicare for All coalesced behind the primary challenge of Keeda Haynes, a former public defender who secured nearly 40 percent of the Democratic primary vote in her unsuccessful quest to unseat Cooper.

Many of those groups are still at it. About two dozen people gathered outside Cooper’s downtown Nashville office on Friday to call on the lawmaker to get behind various climate change, policing and health care proposals.

“I don’t think he’s done enough,” says Audrey Tesi of Black Lives Matter Nashville. “I’ve seen him provide some statements, but those are empty statements. It’s not enough to say, ‘I hear and see you and I empathize with you.’ That does not provide materially effective change for the Black community.”

Cooper has long been known as a moderate Democrat — a budget hawk who made a name for himself in the 1990s fighting against Bill and Hillary Clinton’s plans for universal health care. But in the face of Trump’s presidency, a once-in-a-lifetime pandemic and, yes, pressure from the left, Cooper has softened on some fronts.

On the debt incurred for COVID-19 relief and economic stimulus, he says: “These are big bills, but we can pay them down over time, just as we did after World War II. It shouldn’t take a war to get us to believe in ourselves enough to invest in ourselves.”

Cooper co-sponsored an early iteration of Medicare for All, but he hasn't signed on to more recent efforts — though he now says he is open to it..

“Medicare for All is one way to get to universal coverage, but it’s not the only way,” a Cooper staff member says. “He’s open to all of them, and will support a solution that can pass.”

He also signed on as a co-sponsor of the Green New Deal shortly after luring his first primary challenger in the 2020 cycle. Previously he said he supported the concept of the suite of proposals but wouldn’t sign on because it “wasn’t a legislative proposal” — a hesitancy he reiterated when announcing his support.

“I’ve never heard a representative badmouth a resolution or bill that they were co-sponsoring while they were in the midst of co-sponsoring it,” says Rick Herron of the pro-Green New Deal Sunrise Movement. “The urgency that we’re feeling in Nashville after another flood, the urgency that folks on the ground are feeling and the urgency that the Democratic Party is feeling to take serious action on climate, I think that’s all growing and not shrinking. The pressure for him to step up on this issue is only going to grow.”

In an interview with the Scene late last year, Cooper acknowledged the influence of progressives but said Democrats in places like Tennessee should focus their ire on Republicans. He also said Democrats should be wary of lurching further left as the GOP-dominated state legislature prepares to divvy up congressional districts following the census.

“We need the energy and the idealism of the progressives,” he said. “We need to remember to focus on the real opposition, which is the Republican Party. It's very easy for us to spend all our time and effort focusing on party purity instead of on winning elections. Tennessee Democrats need much more practice on winning elections.”

For her part, Kelly says her two main priorities if she were in Congress today would be Medicare for All and Green New Deal legislation.

In addition to Justice Democrats, Kelly launches her primary challenge with the support of prominent local progressives including voting-rights activist Tequila Johnson, Metro Nashville Education Association President Amanda Kail and Metro Councilmembers Delishia Porterfield and Sean Parker, the latter of whom is working on her campaign.

Another name on the list of endorsements is Henderson Kelly, Odessa’s father and a longtime Metro Parks employee himself. Like the kids she mentored at Napier, Odessa grew up spending time across the Cumberland River at community centers in Cleveland and McFerrin parks, where her father worked. Comparing her trajectory working for Metro to his was part of her political awakening.

“I had to get a master’s degree just to get to middle management, the same level that my father had gotten to, yet I wasn’t gonna be able to afford the same things he had given us,” says Kelly, the mother of two teenagers. “There was something wrong with that, and it wasn't my fault.”

More influential, though, were the uncertain futures of the children Kelly worked with at Napier. Some were success stories. Others turned to crime to make ends meet. Still more fell through the cracks as their parents fought to afford to live in Nashville.

That was the energy behind the founding of Stand Up Nashville. The organization’s best-known accomplishment to date is a community benefits agreement with pro soccer team Nashville SC. As the team was planning to build a new stadium, partially funded by Metro tax dollars, Stand Up Nashville negotiated an agreement with Nashville SC requiring the stadium development to include affordable housing, a child care facility and a living wage for construction workers.

The thinking at the time, Kelly says, was, “It’s going to happen, so instead of us being mad about it, how do we make this something great for the city?”

“It wasn’t adversarial,” she says. “It was us as a city passing a test of how progressive we are and who we are as a city.”

Kelly presents her relatively short tenure as the full-time leader of Stand Up Nashville as a sort of practice run for Congress.

“We have the receipts for the good work we can do,” she says. “Two years in Congress, we’re going to get the exact same energy, the same type of effort.”

Kelly knows many of the boys playing basketball in the Napier Community Center gym on this recent afternoon. And she has some game herself. She played at both Stratford High School and Tennessee State University — she’s listed in the record books at the latter for career rebounds. So when a kid she knows bricks a jump shot, she has some words for him.

“I know I taught you better than that,” she says.