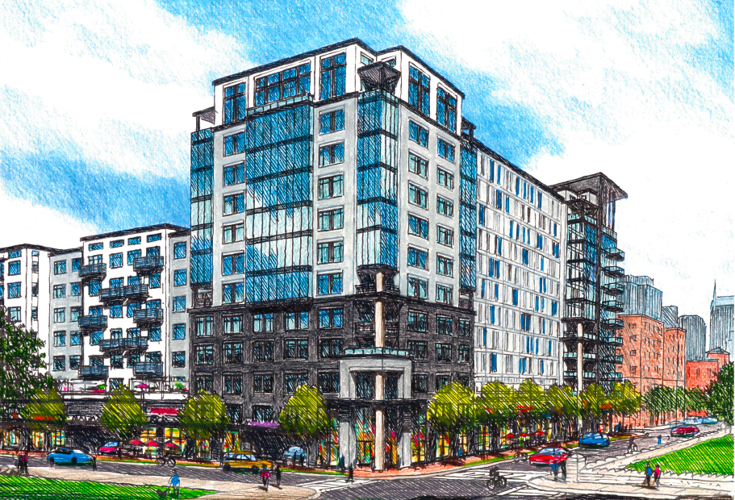 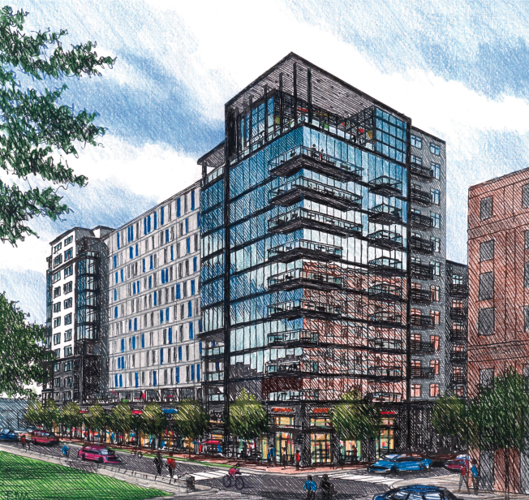 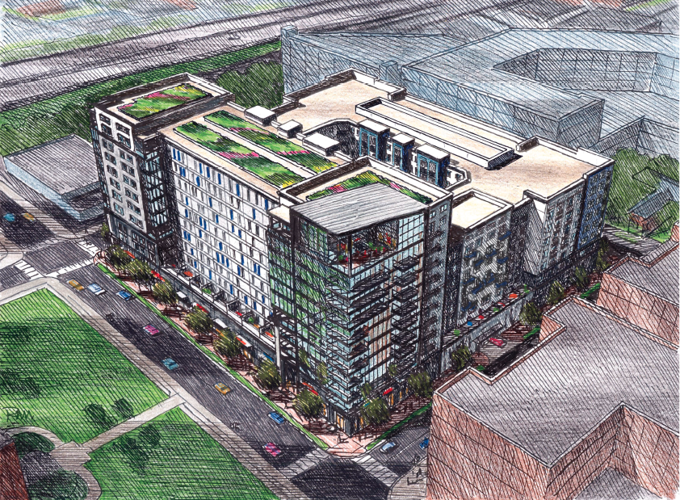 Details are emerging, with images included, regarding an apartment building project to replace the downtown building home to live music venue 3rd and Lindsley, among other businesses.

According to a multi-page concept plan document submitted to the Metro Planning Department, Isle of Palm, S.C.-based Woodfield Development is seeking 438 residential units in what seemingly is one structure acting as two, with 11 floors at its tallest segment and eight stories at the other section.

With a working name apparently of Second Avenue Gateway, the building will stand 145 feet at its tallest point and offer primarily below-grade parking (with the document not listing the number of spaces). Exterior materials primarily will include metal panels, fiber cement and brick.

If it materializes, the project will unfold at 805 President Ronald Reagan Way (Second Avenue South), with Woodfield seeking to buy the property. The buildings are known as Downtown Business Centers II.

According to sources, the multiple tenants working from the two buildings will see their respective leases end in 2023.

3rd & Lindsley began operation in the Rutledge Hill building in 1991. Owner Ron Brice told the Post last week he still is looking to possibly relocate his business to Wedgewood-Houston.

The Nashville office of Raleigh-based Kimley Horn is handling land planning and engineering duties for Woodfield Development, officials with which could not be reached for comment. Also participating are Franklin-based Kiser + Vogrin Design (landscape architecture) and Charlotte-based Housing Studio (architect).

Known as Downtown Business Centers II, the two-building complex is oriented in a suburban manner, with surface parking separating the buildings from the street.

A companion property, the former Downtown Business Centers I, was sold in October 2020 and redeveloped with apartment building Broadstone SoBro by Phoenix-based Alliance Residential Company.

In Midtown, Woodfield Development remains under construction with The Margaret, a 292-unit apartment building with an address of 1600 Patterson St.

Woodfield specializes in the development of sites with three- to eight-story apartment buildings in both urban and suburban settings. The residential buildings are located primarily in Mid-Atlantic states. The company, which also operates offices in Washington D.C., Charlotte, Raleigh and Charleston, most recently undertook developments in Atlanta and in Florida.

An entity affiliated with Nashville-based Cirea Management Group owns Downtown Business Centers II, having paid $2.25 million for the two-acre property in 2003, Metro records show. The entity could not be reached for comment regarding a date when the property is slated to be sold.

Exit/In to Close After Thanksgiving, Reopen Under New Management