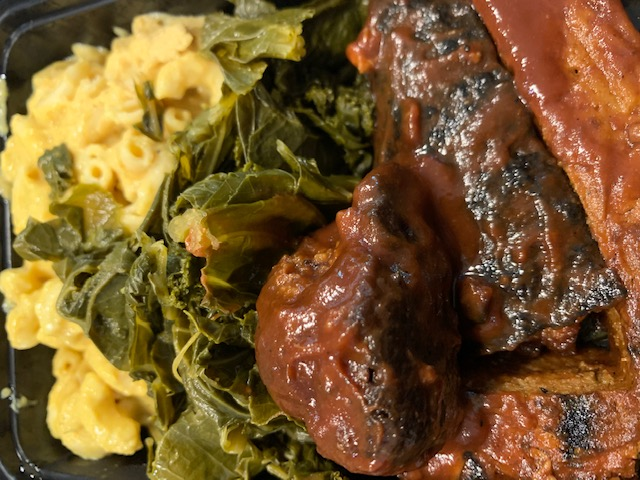 Much of the restaurant industry has had to rapidly change its business model due to COVID-19, and we’re trying to highlight the Nashville places that are attempting to stay open. Each day we will give you a critic’s pick for a restaurant and a dish, as well as a running list of restaurants still open that you can support. Today: Radical Rabbit.

For today, I’m swerving way out of my normal lane to tell you about the amazing vegan soul food from Radical Rabbit. It’s a delightful truism that some of my favorite soul food in town is vegan, and some of my favorite vegan food comes from soul food restaurants like Riddim n’ Spice, Vege-licious Cafe, Vegan Vee and The Southern V. It’s also not a coincidence, as I discussed with the passionate and smart owner of Radical Rabbit, Mariah Ragland, as I waited to pick up my pre-ordered dinner at the 12South Farmers Market.

She told me that she considers veganism almost a radical act for African-Americans, a way to connect to the food of their roots without adding to the health problems that have traditionally held them back and added another hindrance to equality. In a fascinating short documentary on her website, Ragland discusses how soul food originated with slaves figuring out how to work with the leftovers from their masters’ kitchens — usually not the healthiest parts of the animals, but capable of contributing the amazing flavors that are the hallmarks of the cuisine. She rejects the idea that soul food has to be unhealthy to be authentic and delightful.

Working out of Citizen Kitchen in Hunters Station, Ragland creates deeply flavorful plant-based foods using her own house-made tofu, jackfruit, mushrooms and other healthy ingredients. The hardworking chef usually sells her wares via preorders on her website and then distributes them chilled and ready to heat at farmers markets across the area. Her menu changes frequently based on her whim and available ingredients, so it’s best to check out the website a few days in advance and get your order in before the deadline.

Radical Rabbit meals are available every day at Hunters Station’s Citizen Market, Tuesdays at the 12South Farmers Market, Saturdays at the Richland Park Farmer’s Market, Demeter’s Common in Lebanon and at the Nashville Farmers’ Market at occasional pop-up events (once they start having those again). On the day I picked up my order, Mariah’s menu featured two plate dinners: “The Radical Classic” with vegan “ribz,” greens and vegan mac-and-cheese as well as the “Get Ya Roll On,” an eggless egg roll stuffed with lentil-based cheeseburger filling served with a side of loaded mac. I also availed myself of an order of her fried jackfruit nuggets offered with a choice of teriyaki glaze or a Carolina gold barbecue sauce. She also offered fried mushrooms and two dessert options, Sacred 7 mushroom brownies and a banana pudding that the person in line behind me berated me for not ordering. (Hey, I already figured I had over-ordered.) Ragland sources some of her mushrooms from Henosis and was selling bags of some gorgeous fungi at her table for your own home cooking.

Normally, I look askance at meat substitutes that pretend to be meat. If I’m making the conscious choice to eat vegan instead of my usual carnivorous predictions, I’m fine with experiencing a different sort of dish made with tofu, tempeh, seitan, etc. That being said, those fried teriyaki jackfruit nuggets could fool anyone into thinking they'd stopped at Zaxby’s on the way home. Like all the RadRab meals, they would probably have benefited from being reheated in the oven instead of the microwave like we did due to time constraints, but they were absolutely delicious even without that added crunchiness.

The lentil egg rolls were inspired, a really smart way to serve the creamy filling in lieu of trying to craft a patty out of it for some sort of faux burger. If the wrapper had been a little crisper from the oven, it would have been a 10 instead of just a 9. (My bad.) The ribz were surprisingly a little charred, but that was easy to pick around, even if it did reveal the slightly grainy texture of the dish that would have been hidden by a clean bite. No big deal; they were also a fine main dish.

The side dishes were also exemplary, with well-seasoned greens that still had a little tooth to them and two versions of mac-and-cheese. We actually preferred the non-”loaded” version by a skosh, but I’d be pleased with either option in the future. Now if I’d only gotten some of that banana pudding ...

Places with takeout or delivery as of Wednesday, June 24