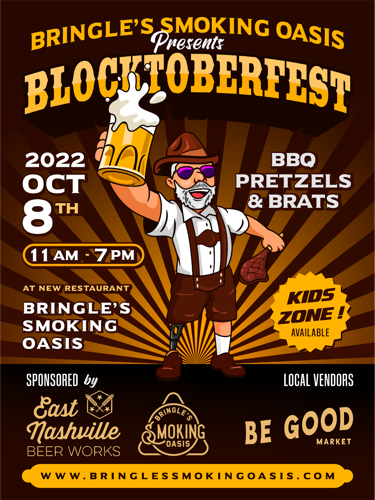 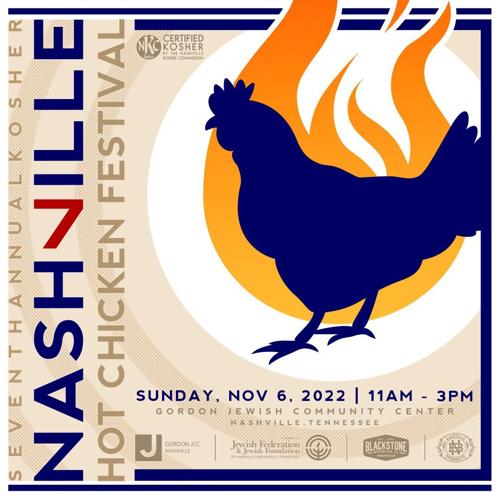 It’s beginning to feel a bit fall-ish and festive out there, so it’s officially food festival season in Nashville. In addition to the already-announced Oktoberfest celebrations in Germantown and at Von Elrod’s and the upcoming Nashville Harvest Festival at City Winery, two additional festivals have just hit the autumnal calendar.

Pitmaster Carey Bringle is planning a free block party in the Nations for this Saturday, Oct. 8, at his Bringle’s Smoking Oasis restaurant. “Blocktoberfest” will celebrate beer and barbecue, which is highly appropriate since the “mission-style” Texas barbecue that the Oasis serves is inspired by the German butchers who moved to the Hill Country of Texas in the 19th century.

The party runs from 11 a.m. until 11 p.m. — and don’t worry about missing the big football games this weekend because they’ll be shown on the huge indoor and outdoor screens at the Oasis. (Bringle is a huge Auburn fan, so he’s not going to miss the Tigers’ tilt against the Georgia Bulldogs!)

They’ll be featuring beers from East Nashville Beer Works plus cocktails, giveaways, a local vendor market hosted by Be Good, a kids' zone, music and, of course, amazing food from the pits at the Smoking Oasis. This event is open to the public, free to attend, and dog friendly.

Sunday, Nov. 6, marks the return of the Nashville Kosher Hot Chicken Fest to the Gordon Jewish Community Center in West Nashville at 801 Percy Warner Blvd. The seventh edition of the family-friendly event will run from noon until 3 p.m., and again football fans needn’t worry because the Titans play a night game that weekend.

The schmaltz will be bubbling as eight amateur cooking teams prepare their best version of the iconic fiery fowl to be judged by a panel of masochists. (Including me, trepidatiously.) Attendees can purchase tickets in advance at the festival website to sample offerings from the teams along with two professional hot chicken restaurants, Hattie B’s and Hurt’s Hot Chicken, who will be cooking up special kosher versions of their greatest hits.

The festival will also feature a beer garden, a kids’ zone and the inaugural Nashville Jewish Arts & Music Festival, so it’ll be a full day of fun! (Plus maybe just a little bit of pain.)