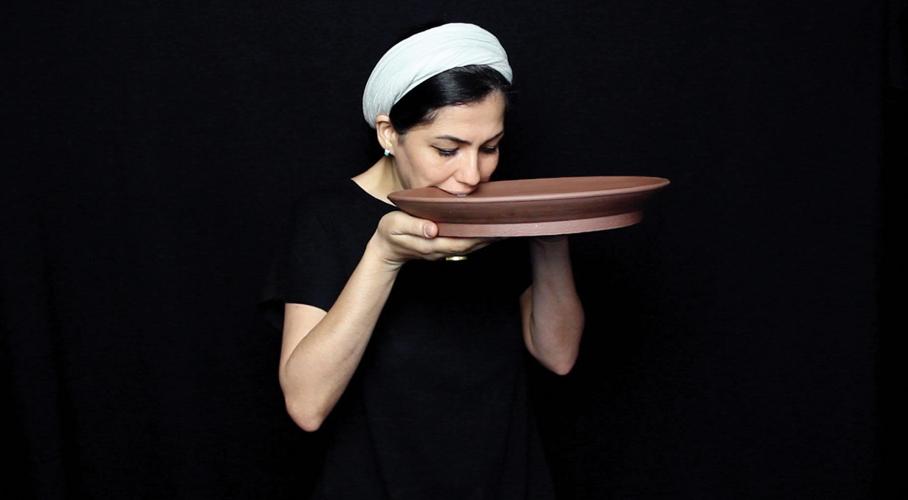 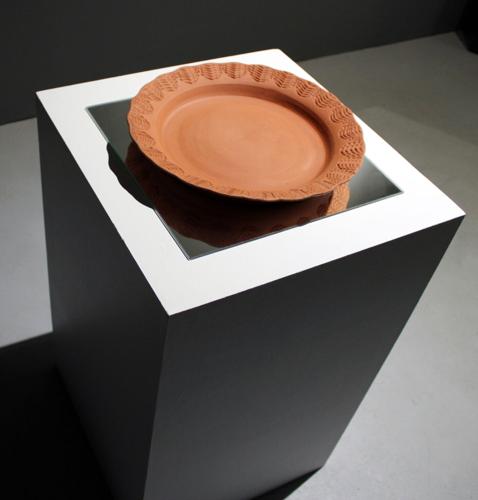 We generally think of art as a hand-tool activity — painters hold brushes; sculptors manipulate chisels and welding torches; digital artists swoop styluses on screens; and photographers cling to their cameras. But Indigenous artists in the Great Lakes region of Canada and the U.S. were crafting elaborate wooden designs by biting birch bark at least 300 years ago. And contemporary artists like Hannah Wilke and Janine Antoni have literally sunk their teeth into their work, making simple ingredients like chewing gum, chocolate and lard into feminist critiques of traditional beauty standards.

At Unrequited Leisure, Nashville-based artist Raheleh Filsoofi’s Artifacting installation pairs a performance video with a sculpture to give viewers an intense experience of mouth-made art.

Through June 30 At Unrequited Leisure

In her video “Bite,” Filsoofi lifts a large, unfired ceramic bowl to her mouth and proceeds to bite into its wide rim. The artist bites the bowl six times, each time incrementally inching toward the center of the bowl. From a nibble to a mouthful, the six bite marks make a pleasantly repetitive pattern of semicircles that add up to a scalloping effect. Filsoofi turns the bowl counterclockwise in her hands and repeats the process until the entire rim of the bowl is decorated by her toothsome design.

The installation at Unrequited Leisure includes a video monitor with Filsoofi’s finished bite-designed bowl displayed in front of it. The arrangement feels like an altar, which adds to the meditative mood of the performance video and charges Unrequited Leisure’s intimate space with mindful stillness.

Jesuit priests sent the first samples of birch-bark bite designs to Europe in the 17th century. Birch-bark artists remove soft bark from birch trees in the springtime before peeling it into separate single layers of paper-thin wood. A layer is folded and then bitten. The teeth marks create thin spots in the wood that allow light to shine through. Artists can also bite actual holes in the bark to create lace-like textures. When the wood is unfolded a pattern is revealed. The practice continues in Indigenous communities in Canada and the U.S. today both as an art form and as an act of resistance to cultural obliteration.

Filsoofi’s work also speaks to other contemporary women artists who’ve put their mouths where their art is to make empowering statements that push back at traditional ideas of feminine beauty. Hannah Wilke’s vulvar terracotta sculptures of the 1960s are now considered pioneering works of graphic feminist art, but when the artist traded in ceramics for chewing gum, the works became iconic. Wilke’s vaginal chewing-gum sculptures combine post-minimalist aesthetics with a satirical bite: “I chose gum because it’s the perfect metaphor for the American woman — chew her up, get what you want out of her, throw her out and pop in a new piece,” Wilke explained at the time.

Filsoofi’s masticating performance reminds me of that, and also the kinds of sculptures that Janine Antoni has created by biting and licking chocolate and lard. Her 1992 artwork “Gnaw” included 600-pound blocks of both chocolate and lard that the artist carved with her mouth. The process became a commentary on modern romance mores and beauty standards when the chocolate, lard and spit removed from the blocks were repackaged as heart-shaped boxes of fancy bonbons and tubes of luxury lipstick.

Filsoofi is a newly appointed assistant professor of ceramics at Vanderbilt University, but her cross-disciplinary creative practice spans from ceramics and video to poetry and ambient sound works. The artist immigrated to the U.S. from Iran in 2002, and her mixing of ancient and contemporary materials and techniques mirrors her aesthetic investigations of sociopolitical themes, which are largely focused on borders and immigration. For Filsoofi, the clay bowl symbolizes historic narratives, which she imagines to be literally embedded in the land. Filsoofi’s performance represents the reassertion of an empowering personal narrative in the form of the artist’s bite-mark pattern.

I find Filsoofi’s installation to be most moving on a purely formal level. Lots of performance-based video art fails when the artist is so focused on performance that they fail to make creative decisions about lighting, angles and edits — all things a filmmaker might obsess over. Some performances might be best showcased with nonchalant documentation, but most of the time this lack of consideration reveals a misunderstanding of the medium.

Filsoofi’s “Bite” video is a great example of performance video done right: She uses dramatic chiaroscuro lighting to focus viewers on her performance. She’s wearing a black dress that causes her torso to disappear into the background, making the slight movements of her seemingly unconnected face and arms appear mysterious and dramatic. Filsoofi’s teeth get stuck in the clay, and the bowl bounces a bit every time her teeth disengage. Filsoofi has to swallow hard and lick her teeth before every series of bites, and the video is surprisingly visceral — my mouth starts watering just typing this description.

The artist also makes a great choice by pairing her video images with meditative silence. The quiet only adds to the sense of this performance as a repetitive ritual in a sacred space.