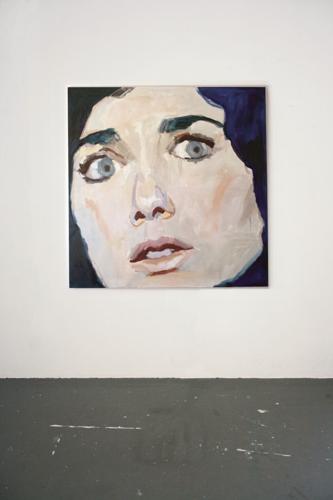 Off-Site is a new series about art created in Nashville being exhibited elsewhere.

Update: Ogilvie tells the Scene that, due to her concerns about lack of COVID protocols at the venue, her show was ultimately canceled.

In an early episode of Columbo, a woman has witnessed a murder. She spends scene after scene trying to convince the police of her veracity, and is played with perfect poise by Suzanne Pleshette. But the performance alone doesn’t explain why artist Morgan Ogilvie was so drawn to the setup — and to the face of the actor, who is the subject of a series of Ogilvie’s monumental paintings now on exhibit in Mexico City.

The exhibit’s very specific combination of self-doubt, paranoia and TV reruns should feel very familiar to anyone who remembers the isolation of 2020. It’s not surprising that that’s when Ogilvie began this project, secluded in her home studio in Franklin, Tenn. The CalArts grad used a few frames of the television episode to create a composite image of Pleshette, her brunette hair cut into an early-’70s shag, wearing a leisure suit jacket that’s the same deep shade of gray as her eye shadow. Ogilvie never nods to the era when the episode aired — if anything, her portraits are timeless and classically beautiful. Pleshette’s ambiguous expression is both vulnerable and determined. Is she lying? Was she mistaken about something? Can her story be trusted? The metatextual layers of copying an actor, who is herself playing a part, add even more nuance to the works.

Each painting — there are six in the Mexico City exhibit, but Ogilvie has painted eight total — is 4 by 4 feet. Each eye is as big as a handprint. They all include the same tightly framed close-up of Pleshette’s face, as caught by the camera’s lens in 1971, but no two are exactly the same. With one painting, Ogilvie began with a bright-yellow underpainting. With another, she asked her husband to smear the paint while it was still wet as she waited in the other room, afraid that her own hand would be too precise and hold back.

The combination of the artist’s obsessive re-creation and the scene’s ordinariness is unexpected. You can almost imagine Ogilvie painting the phrase “All work and no play makes Jack a dull boy” onto her canvas — the effect is the same, and questioning her sanity is itself part of the stigma surrounding women as unreliable narrators.