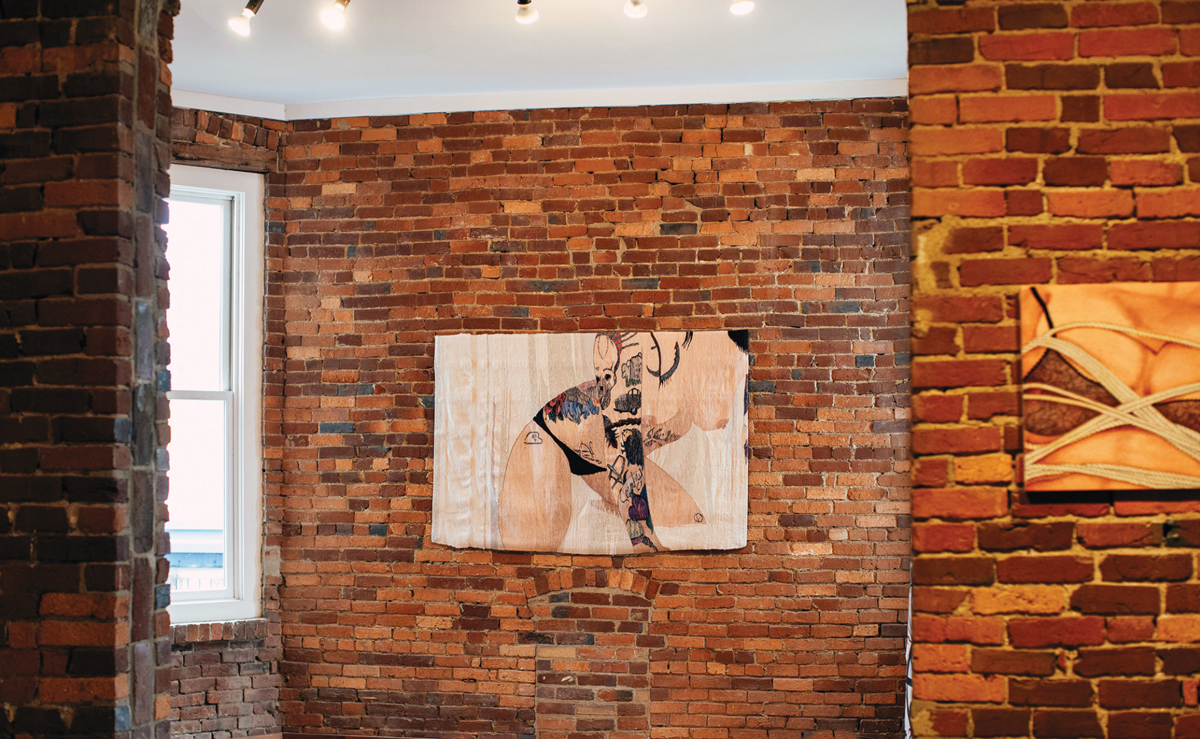 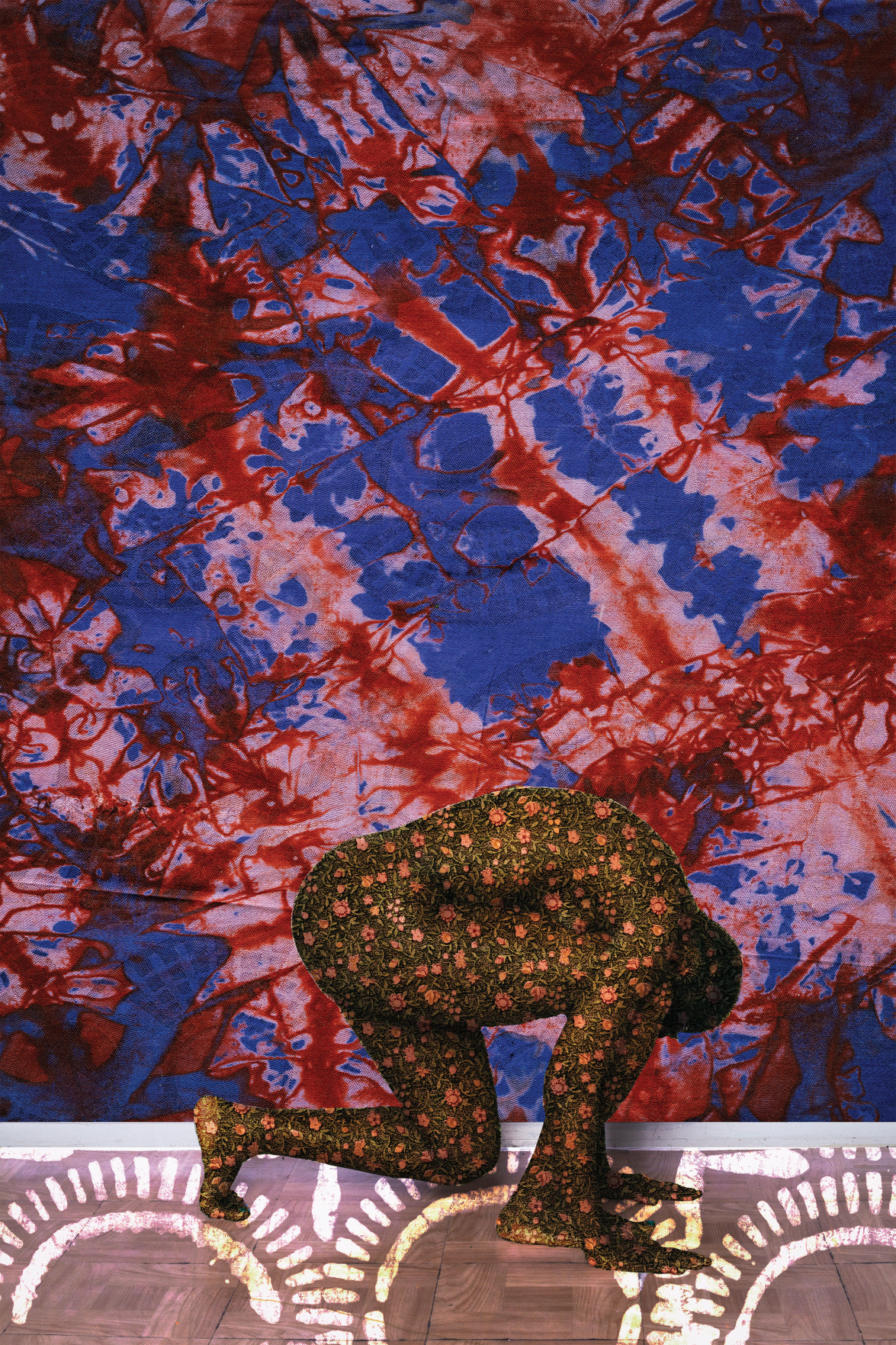 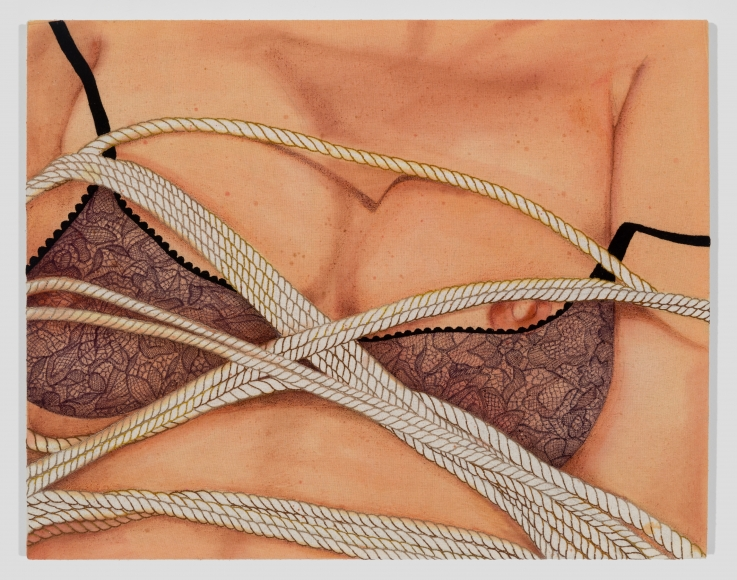 With Shag, the second exhibition in the Scene’s Adult Contemporary series, we’re focusing exclusively on themes of sexuality via textile-based artworks. While that might seem like a fairly specific vision, there’s more room for variety than you’d expect. The show includes 24 artworks by 13 artists whose ages range from early 20s to mid-80s. They’re from cities including Nashville, New York and Berlin. Below we offer excerpts from interviews with three of the exhibiting artists. Erin M. Riley uses traditional weaving techniques to re-create sexy selfies. Adama Delphine Fawundu photographs her own body and superimposes her grandmother’s batik textiles over it. And Katarina Riesing takes the embroidery skills she learned from her mother and subverts the craft completely.

Interesting. I didn’t realize that you were taking the photos, and that the self-portrait was a picture that you had already taken.

All my selfie work has only been [based on images] that I’ve taken for partners, and it had to have been sent. It had to have been engaged with in a real manner. That was sort of my activation process. These are images that I’ve taken for someone, they’ve been sent, and they exist in ephemera on someone’s phone or email or whatever, and then I’m subsequently weaving them to make them real, like a marker of time.

Right. There is this multilayered specificity that somebody engaging with it might not know.

I love the way that there are these beautiful flourishes, but then sometimes you can see there’s cheap fluorescent lights in the ceiling. It’s like a prettified technique, but the selfie — even though it’s a beautiful body — the photograph itself is not great. It’s not like you’re weaving Annie Leibovitz or something, you know?

Right, right. Like it’s one of many. And I think that’s also sort of this idea of sexting. Especially nowadays, people want more and more and more. And so there is a level of quality that you want to put into the picture, but when there is a demand, that’s often when bad composition will slip through the cracks.

There are three photographs from your Body Vernacular series in Shag — two where you’re sort of crouched, and then one where you’re standing up with your fist in the air. That one looks really different when it’s printed, just because the detail of the fabric is so magnified, the texture is so nice.

Thank you. I like to think about what textures you want to touch and what is desirable to touch. Because when you look at it outside of the context of the actual body in the photo, you might wonder whether the image is a textile or a print. And your first instinct will be to touch it. So I think about touching in terms of eroticism, but also this idea of the person having power over how the body is touched. Having agency over those things, because most of the time in our society, when we see a woman’s body, the first notion is to project our ideas onto it. And I want to interrupt all that.

Your work is the only photography that’s in the show, but it’s almost the best example of pure textile. Even though they’re photographs, it’s such a perfect fit. How did you get the fabrics to look so detailed?

There’s this whole process that I go through — scanning material, Photoshopping, screen printing. My process is all about layering, and I really want to feel like I’m literally touching this thing. But also, questioning how this image was created is in itself a part of the process. I want the viewer to question how these were made, what can I touch, what can’t I? Because I think all these questions really mimic what happens inside when we form ideas around people. And I think that’s interesting in the erotic space — about how things could be when you query into them versus when you just go in knowing everything already.

Where do you source your textiles? Some of them look less like fabric and more like painted-on designs.

The batik fabrics are from my grandmother’s fabric collection. One way I was able to communicate with my grandma, who lived in Sierra Leone, was through these fabrics. They would hand-dye them themselves, and then send them as gifts with someone who was coming from Sierra Leone. So I have a collection of these fabrics. And I have a collection of fabrics that I get when I travel — particularly in West Africa, through stamping, and batiking, and tie-dying. So I just took those and then thought about what it means to embody these things. When you transport yourself to a new place, you become this hybrid with a foundation of knowledge that you have from your ancestry.

I was just reading something about this — I’d never heard the term “third culture” before, but it’s exactly what you’re talking about. Third-culture kids are children of immigrants from one nation or one country who are creating a new sort of a hybrid culture.

I’ve never heard of that, but that’s me. And if we think about hybridity as a progressive way to be, we elevate those things and recognize that cultural hybridity means working together to create something new, rather than creating a hierarchy that suppresses one and gives another more relevance. These things play hand in hand, and they work together to make new ideas.

I’ve always been interested in the figure. I took a silk-painting class at [Fashion Institute of Technology], and everyone else in the class was making work for more of a commercial setting — there were a lot of florals and geometric patterns. And I love being the asshole in the class. So I was like, “I’m going to do something totally different that you would never see on a silk scarf.” I started doing severed body parts and severed fingers and fingernail clipping. Gross things that you wouldn’t necessarily see on surface design. And then I was like, “Oh, I love it — this silk looks like skin.”

There’s something that is so delicate and precious about the work and the way that it’s layered, that you layer the embroidery on top of the silk drawings or silk paintings. Is it all by hand?

It’s all by hand.

How did you learn how to do that?

My mother [Marcia Goldenstein] is like a master embroiderer.

Oh, that comes in handy.

Yeah, she’s amazing. And she’s been embroidering for as long as I can remember. I learned not too long ago, actually — it was when I first got my job out here [in Alfred, New York]. I was very isolated, and I didn’t know anyone. And in the winter, you just don’t leave the house. I was home for Christmas, I think, and I was like, “Marcia, teach me! Teach me your skills.” So I just watched her, and over the winter, I just practiced. Then I also embroider clothing for fun, and so a lot of my practice was on denim shirts and jackets. And then I started bringing it into the paintings.

So you grew up with this mother who was a master embroiderer, and you didn’t do it until you were out of the house.

Yeah, I resisted. For a long time.

Totally. I love that subversion. Being subversive with the materials and letting them do something that we’re not used to, or playing in territories that they’re not maybe meant for, or traditionally meant for — it’s exciting.