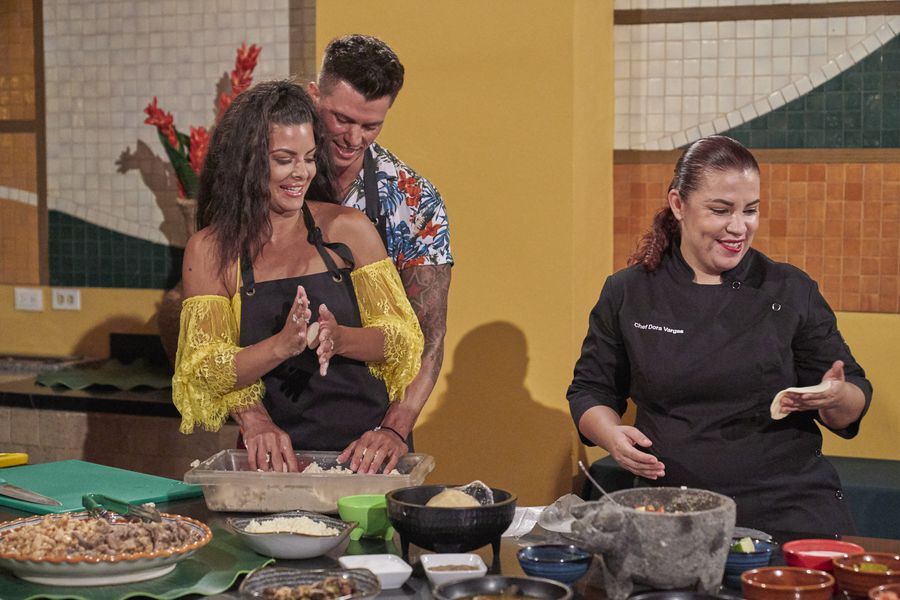 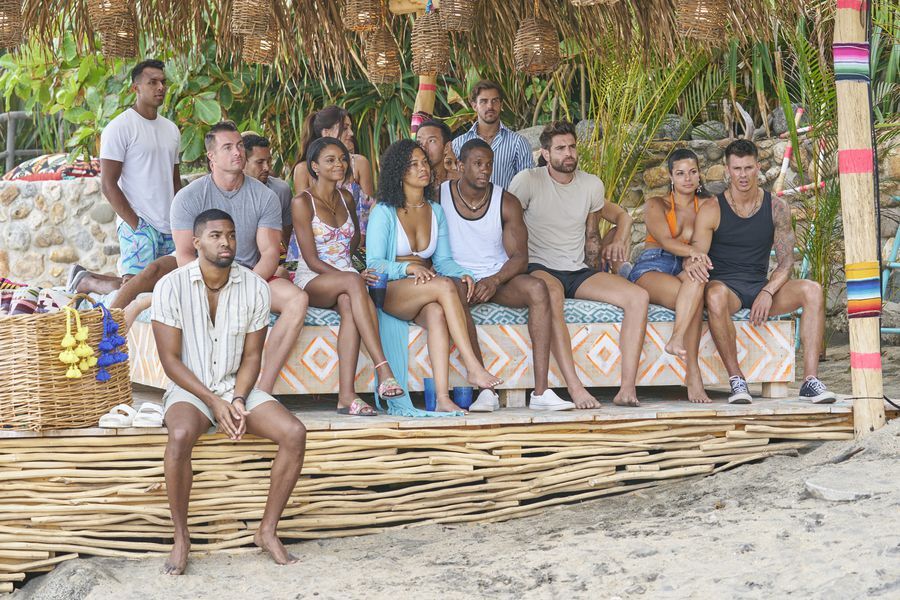 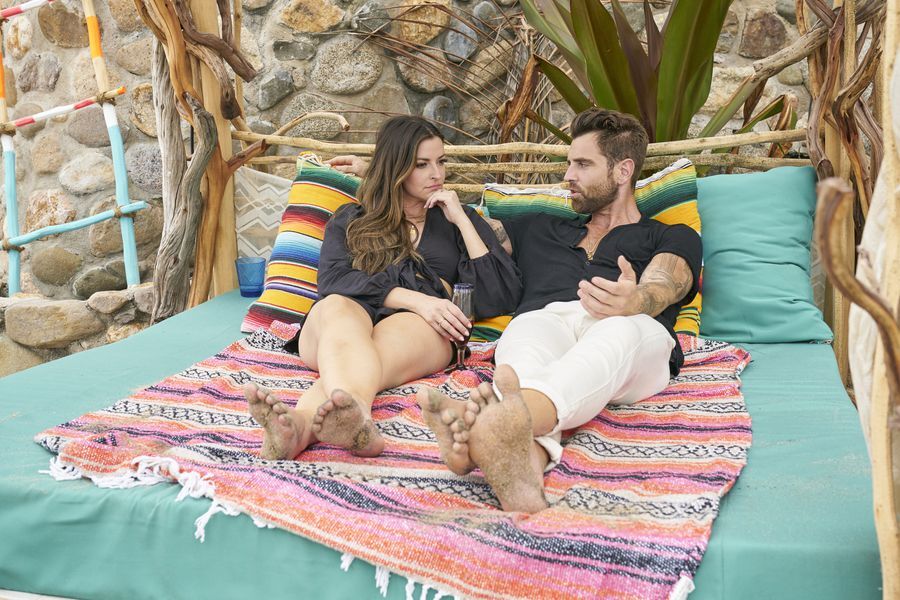 Love is in the air, and so is the faint scent of sour cream mixed with leg hair. It’s time for another episode of Bachelor in Paradise, and if you’re lactose intolerant, proceed with caution.

We pick up where we left off, which is with Joe and Serena making out after confessing their love for one another on the beach while, 20 feet away, his ex Kendall watches. She leaves to get advice from the resident beach therapist, bartender Wells Adams. Wells is the most qualified person in Paradise to give romantic advice because he is what all of these contestants strive to be: an influencer who is engaged to a famous person. What more could you want in life?

Kendall pulls Grocery Store Joe aside and tells him that things have been hard. She’s happy to see him thriving, but it reminds her of why she fell in love with him in the first place. They are hugging. Kendall is crying. There’s a close-up shot of her rubbing his back. A wave crashes. A bird chips. A crab dies alone in the dark. Kendall asks Joe why he came on the show, and he tells her it’s because he knew they were officially over. There’s more crying and hugging, and Kendall goes home to taxidermy some wild prey. As long as she doesn’t have Serena stuffed and hanging above her mantel, I think we’re all going to be OK.

The next morning, Lil Jon shows up to yell at everyone on the beach. I too would like to yell at these people on the beach, but alas, I must yell at them on the internet. Lil Jon says he’s gonna turn things “upside down.” What is this unexpected twist he speaks of? Oh, it’s just two muscly men running in slow-motion across the beach like this is the intro of Baywatch. So there’s just two new guys coming on the show? And that’s it? That’s the big twist? Wow, Lil Jon, you really shook things up. How will the show ever recover? The two muscly men in question are Ed and Demar, and because they’ve been coached by producers, Ed asks out Natasha and Demar asks out Chelsea, the only two girls who aren’t in committed relationships. They go to a Mexican version of Sip ‘n Stroke, and the girls paint portraits of the men and then literally paint the men’s bodies and this date is so boring, it ends in two minutes.

Meanwhile, Kenny gets a date card and asks Mari. Since Kenny’s entire personality is just being naked, he and Mari will be stripping down and eating tacos off each other’s bodies on this date. Literally, they’re assembling tacos on their naked bodies while a poor woman, who is definitely not being paid enough for this, stands idly by pressing fresh tortillas for them. (Or tor-titties, as someone in our viewing party called them.)

I thought Riley sucking whipped cream off Maurissa’s toe last week was the grossest thing this show could do with dairy, but as I’m watching Mari rub sour cream into Kenny’s leg hair right now, I’m realizing I was terribly wrong. I don’t think I’ll ever look at sour cream the same way again. Or legs for that matter. After their date, while the sour cream hardens in their leg hair to form a thin crust, Mari and Kenny confess that they’re falling in love with each other and then go to the Boom-Boom Room. I hope they showered first. That sour cream is not going to smell good in the morning.

Back at the beach, James — the generic brobot that can’t get a girl interested for more than 10 minutes — plans what he thinks is a “romantic” date for Tia. In reality, he paints a piece of wood to look like a stoplight to remind her of the lame-ass town she grew up in. He kisses her and she says “... thanks.” In case anyone didn’t pick up on the complete and total lack of sexual chemistry in this kiss, Tia tells the camera that James doesn’t make her vagina dance like Tatty Daddy Blake does. She then proceeds to have a conversation with her vagina on camera. I have hit a low point in my life. Is this what rock bottom feels like?

Maurissa, a woman who had never gone on a date before this show, announces she’s ready to get engaged to Riley, a man she’s been dating for two weeks. She is worried that Riley might not feel the same because he doesn’t open up to her very much. He’s good with the muscles, not so great with the words. She pulls him aside for a conversation and he tells her about his challenges with his dad and his fears about relationships. He cries and it is sweet. Maurissa tells Riley she’s falling in love with him, and he says he’s falling in love with her, and my husband asks, “What do they get if they win this show?” and the answer is, of course, absolutely nothing.

The next morning, the gang is gathered for breakfast, preparing for the Rose Ceremony, when a producer shows up and tells them a tropical storm is coming and they must evacuate immediately. Is it Hurricane Demi? The Tahz-nado? No, it is just some heavy rain and thunder that the show will edit together to appear more dramatic. Naturally, they take about three hours to pack their bags, taking breaks to make out and do interviews, while we see terrifying videos of palm fronds floating in the pool and a piece of wicker furniture gently tumbling over. How will they survive this? We see everyone pile into vans and then, in the very next shot, everyone returns and everything is totally normal. Thank you for that carefully orchestrated 12 seconds of drama, ABC. It really added to my viewing pleasure.

The Rose Ceremony is coming up and the women have the roses this week. Time for a math quiz: If there are eight women and 12 guys, how many losers will there be this week? That’s right — 20. Tia is torn between James, a boring gym bro who painted a stoplight for her, and Blake, her sexy tatty daddy who made her vagina dance but hasn’t spoken to her in two days. Tia confronts Blake about not making any effort, and he gets defensive. He says he is but a simple man, and simple men can’t be expected to do things. Come on! Measure your expectations, Tia. The man made your vag dance. Is he expected to also be nice to you? Psshaw. She goes to talk to James and kisses him, but are her lady bits doing the Charleston right now? Methinks not.

Aaron is trying to lock it down with Runway Model Chelsea by setting up a fake runway on the beach and strutting his stuff. He attempts to romance her with his poetic prose, telling her she’s “like, the full package type deal.” Swoon. It’s hard to imagine that she could resist that, but five minutes later she cozies up with Ivan, a far superior human being, and starts making out with him as Aaron watches from the next daybed. I was about to express some sympathy toward Aaron, who has already watched a lady he likes make out with a guy on the next daybed over once this season, but then he calls Ivan “a snaky little bitch bag,” and yeah, Aaron is officially dead to me. He challenges Ivan to a BIP duel, which, as far as I can tell, is just when two men stand close together and go back and forth saying, “Come at me, bruh” until the steroids peter out. We’ll have to wait until next week for the conclusion of this beachside brofight.

Sour Cream Containers Thrown in the Trash After Watching Kenny and Mari’s Date: All of them