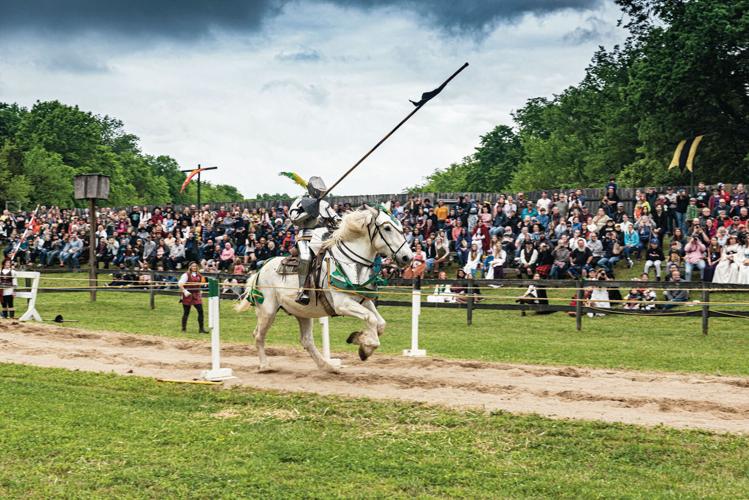 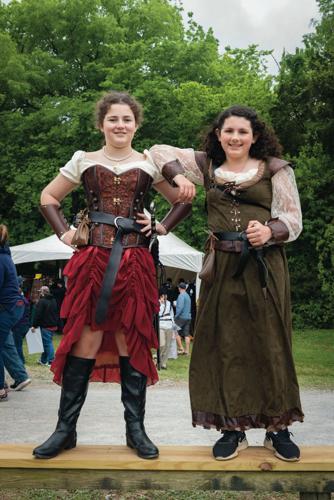 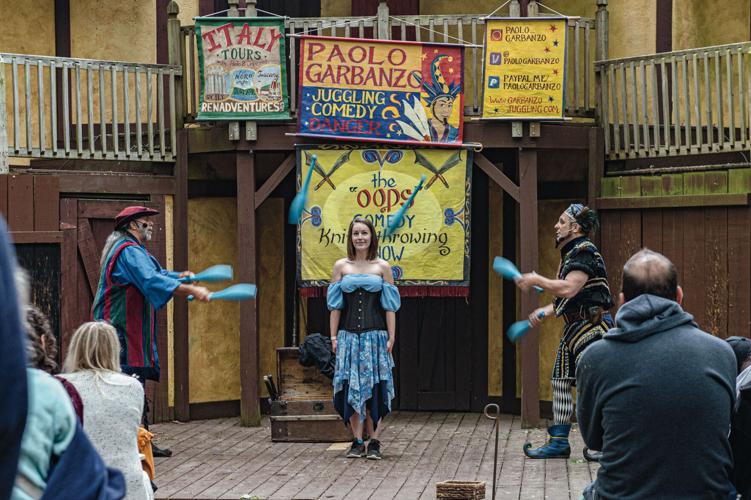 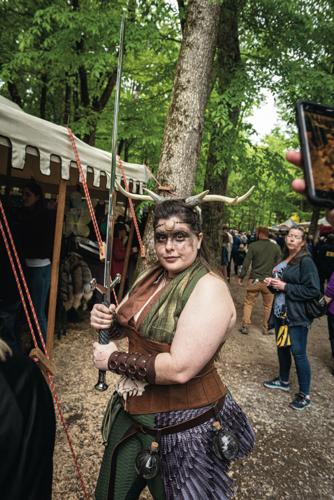 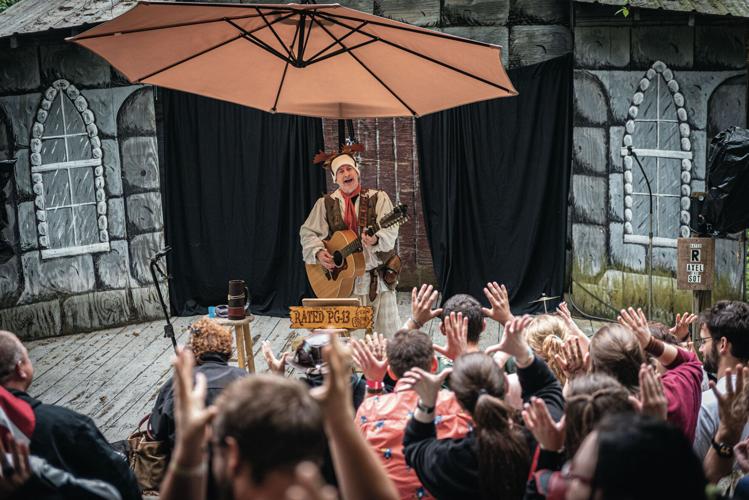 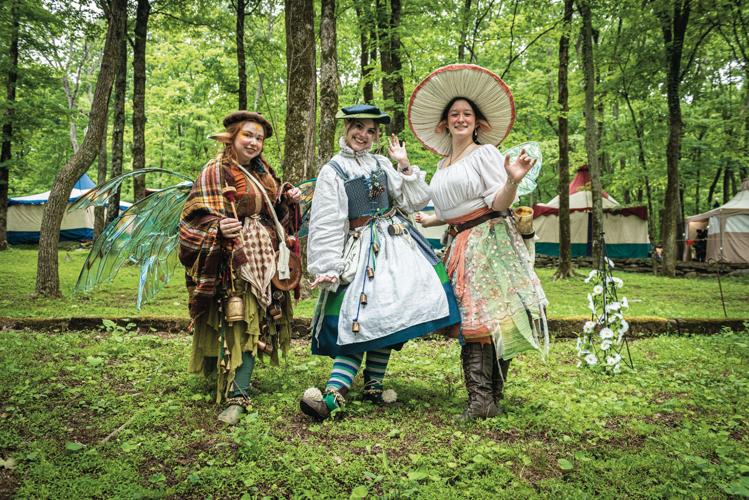 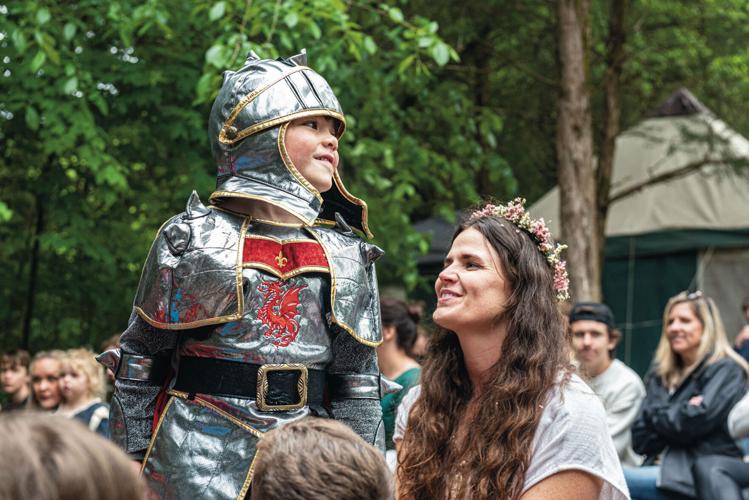 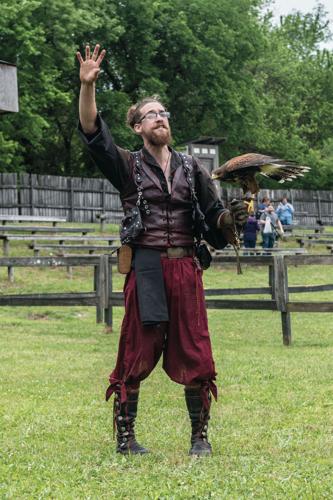 ’Twas cloudy on the opening day of the 36th annual Tennessee Renaissance Festival, but that didn’t stop a sizable crowd from attending the event in Arrington, Tenn., about 45 minutes south of Nashville.

The cool weather proved ideal for those decked out in heavy layers of their ren-fest finest. Capes were draped over shoulders, walking staffs tapped along the ground, corsets were laced tightly, and bustles shimmied back and forth behind meandering maidens. Kings, queens, knights, pirates, fairies, trolls, peasants, mythical creatures and even ordinarily dressed folks wandered among throngs of performers, merchants and food stands. Some carried weapons, like executioner’s axes or longswords. (Weapons, however, must be covered and “peace-tied,” as it’s called — check the website for other requirements.) Overheard conversations included a knight talking about the importance of flexibility in armor, a son asking his father how crossbows work and one man commenting on the size of another’s staff.

Historical accuracy isn’t a requirement at this ren fest, which takes place every weekend in May. While some folks attempt to adhere to Renaissance-era garb, a lot of them lean toward a fantastical aesthetic — what can sometimes be called “goblincore,” with elf ears, fairy wings, toadstool mushroom caps and more.

Tennessee Renaissance Festival performers — from magicians and jugglers to period musicians — don’t always stick to historical accuracy either, but weaving modern jokes into their old-timey setting makes performances accessible and entertaining. One act on the weekend the Scene visited, for example, incorporated a joke about Zoom, and various musicians included covers of Led Zeppelin and The Proclaimers in their sets. Sometimes, you can track down the best shows just by following the sound of cheers and applause. Most acts perform multiple times throughout the day.

Don’t miss the three daily Royal Jousts if you can help it. Knights on horseback compete in a series of smaller games before the actual jousting begins. The knights are great, clad in head-to-toe armor, but the horses are the true stars of the show. On Day 1, a gorgeous, stocky white steed showcased a flair for showmanship by rearing up before galloping down the sandy central path of the arena. Elsewhere on the grounds, “unicorn” rides are available, along with carnival games like ax throwing and high striker. You can also watch a knighting ceremony or hop on a bus to see nearby Castle Gywnn.

Another ren-fest classic is the turkey leg — not for the faint of heart. The Scene ordered one, and though it tasted delicious covered in a cranberry barbecue sauce, it was a massive undertaking. One turkey leg could feed at least two people. There are plenty of other options, an array of artery-clogging festival foods.

The stars of the daring knife-centric comedy show Oops! Knife Throwing (yes, really), Paolo Garbanzo and Giacomo the Jester have been performing together for almost 20 years. When speaking with the Scene, they don’t exactly drop the act. “It’s always a very odd balance,” says Giacomo of breaking character.

But they aren’t just weekend performers; they’ve built careers around renaissance-related activities. Giacomo also performs in a Celtic band called Empty Hats, which you can catch at the festival, and he and Garbanzo guide trips to Europe, introducing clients to medieval and renaissance festivals.

A few things to note before you go: Bring cash to avoid the $6 service charge at the entrance. Food vendors, games and rides require cash, and once you’re in the fest, there aren’t any ATMs. Some of the booths selling art, goblets, swords and so on will accept credit cards. Bring a little extra cash to tip the performers and food vendors too. No booze is allowed this go-round, since the family who owned the property sold it to Williamson County earlier this year. (County-sponsored events are not permitted to sell alcohol.)

The jousting is great, the food delicious, the acts entertaining — but the best part of the Tennessee Renaissance Festival is the space it opens for people to be their authentic selves. It’s not every day folks can openly celebrate interests like pirate cosplay and fairy-speak, but here it’s welcomed and celebrated.

“I heard the greatest quote at [another fest],” says Giacomo. “This guy said, ‘The renaissance festival is where you come when you want to take your mask off. Even if you’re wearing a mask, you’re taking your mask off.’ And I thought that was a really perfect description of a patron’s experience here.”

Waterfront dining, a Renaissance festival and coveted barbecue — plus more great summertime stuff to do and where to do it