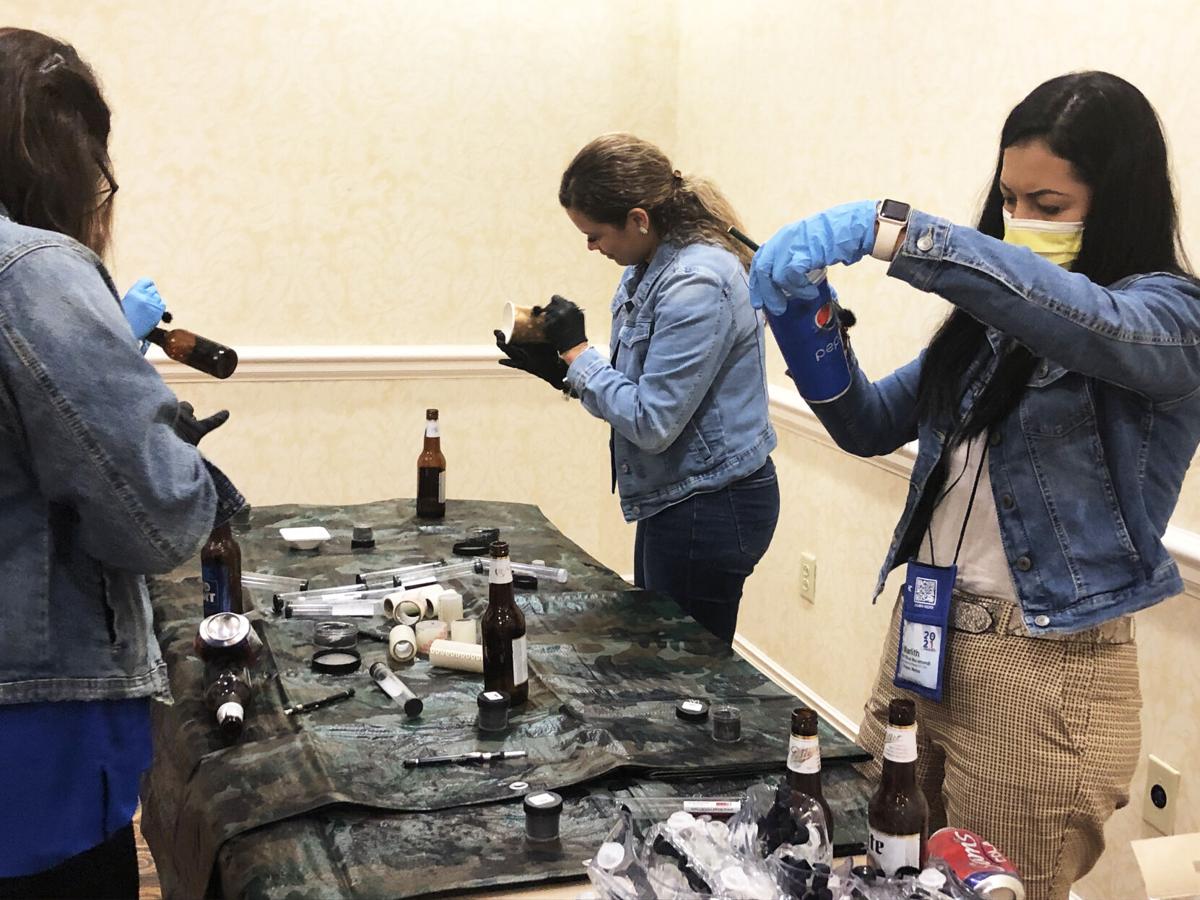 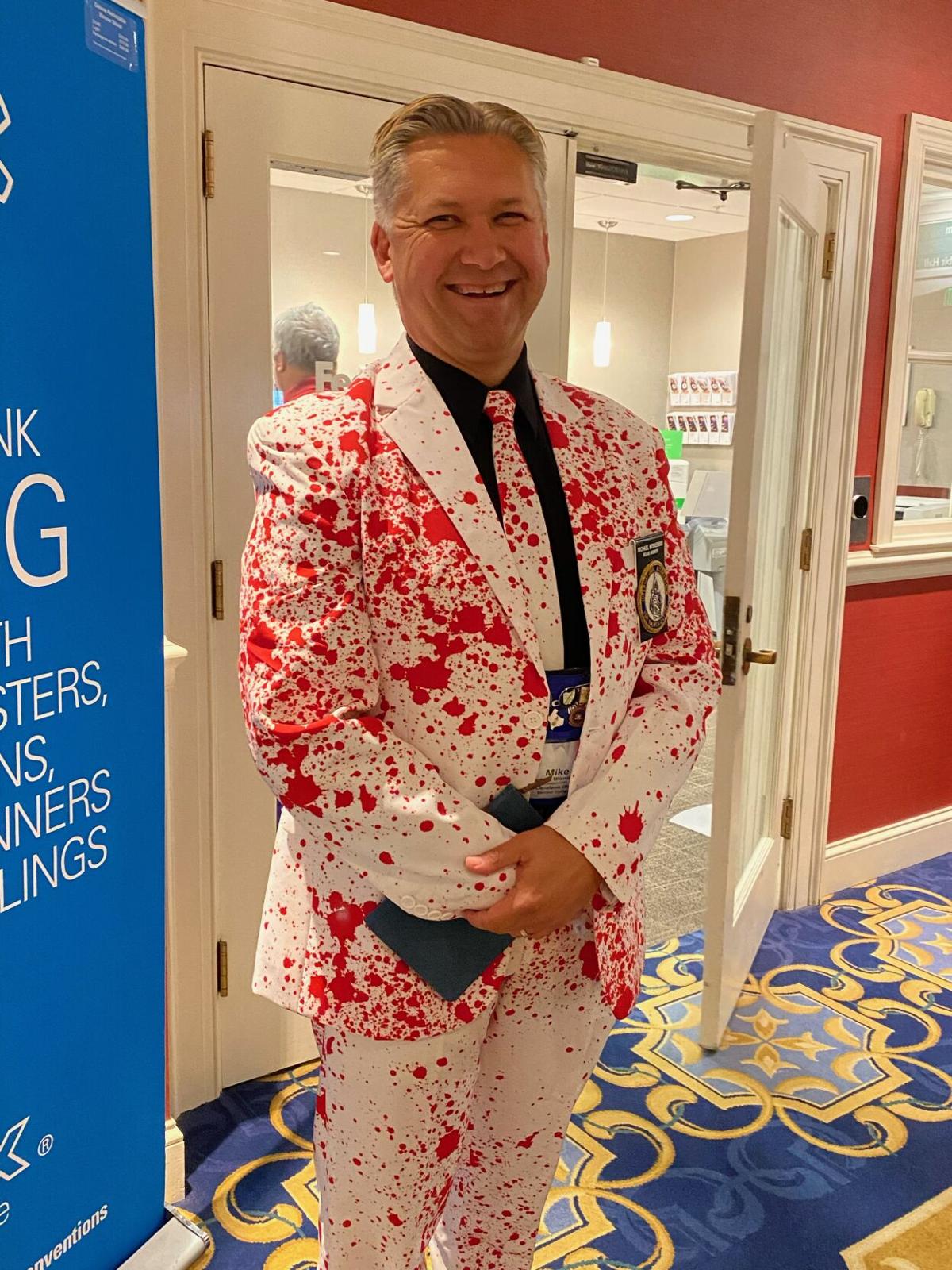 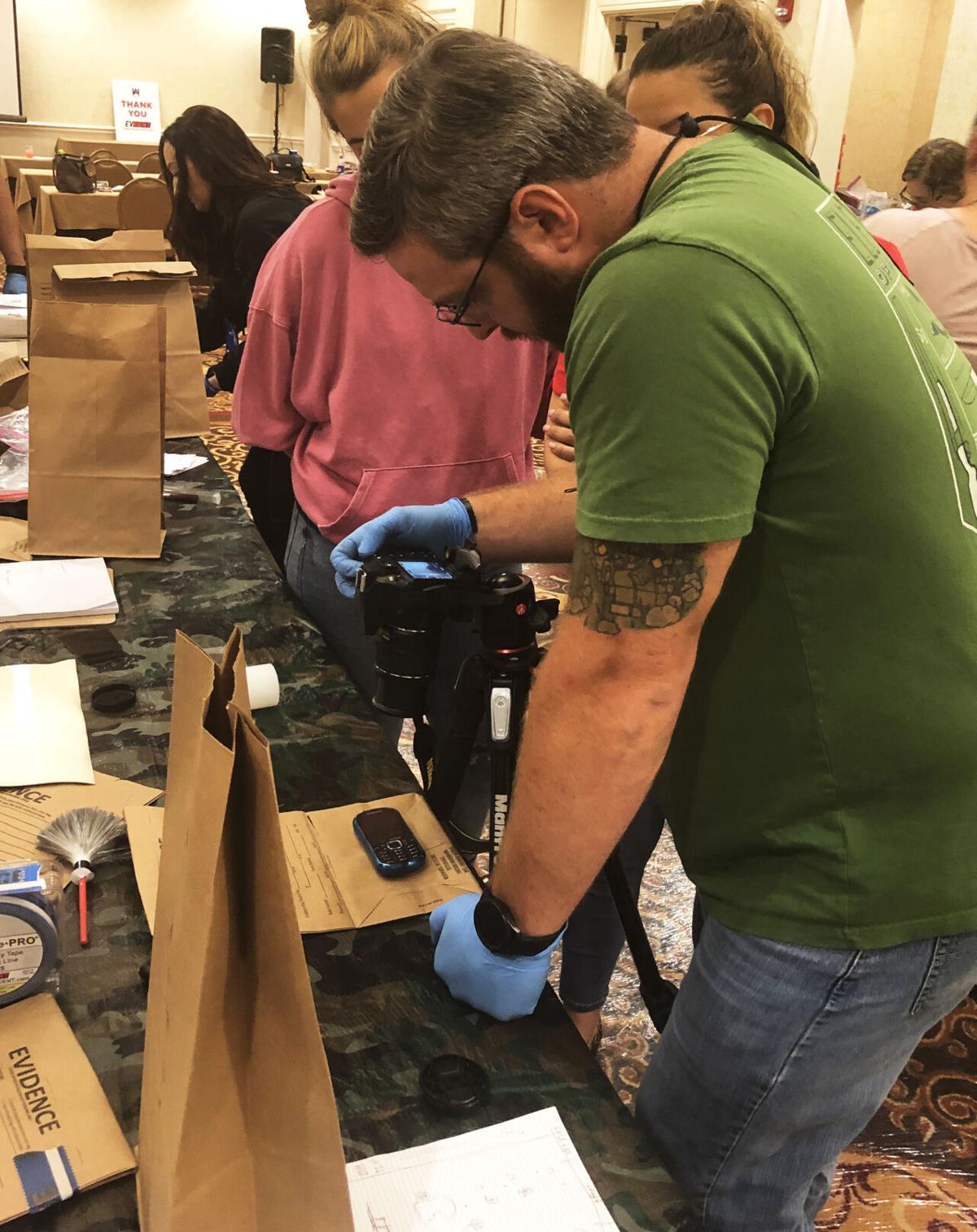 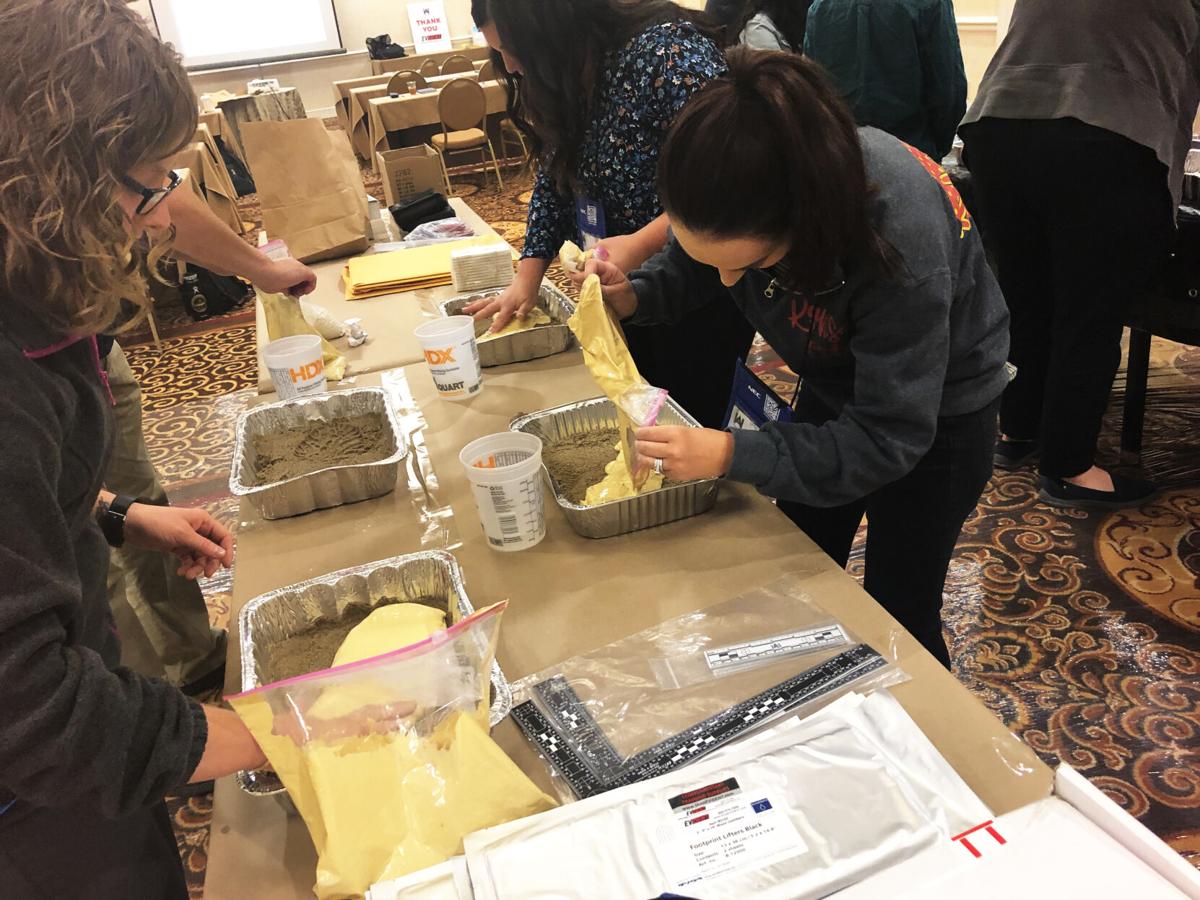 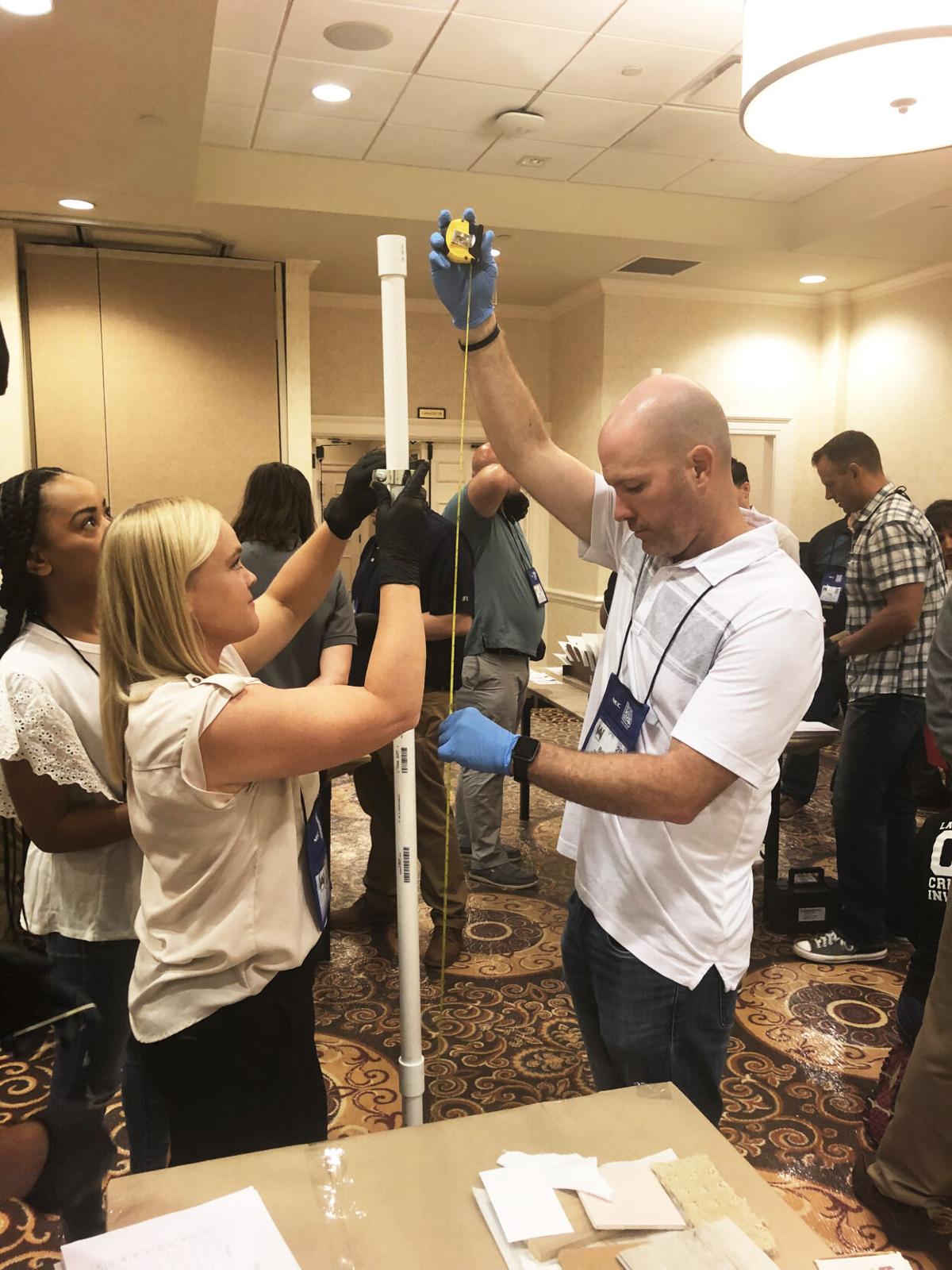 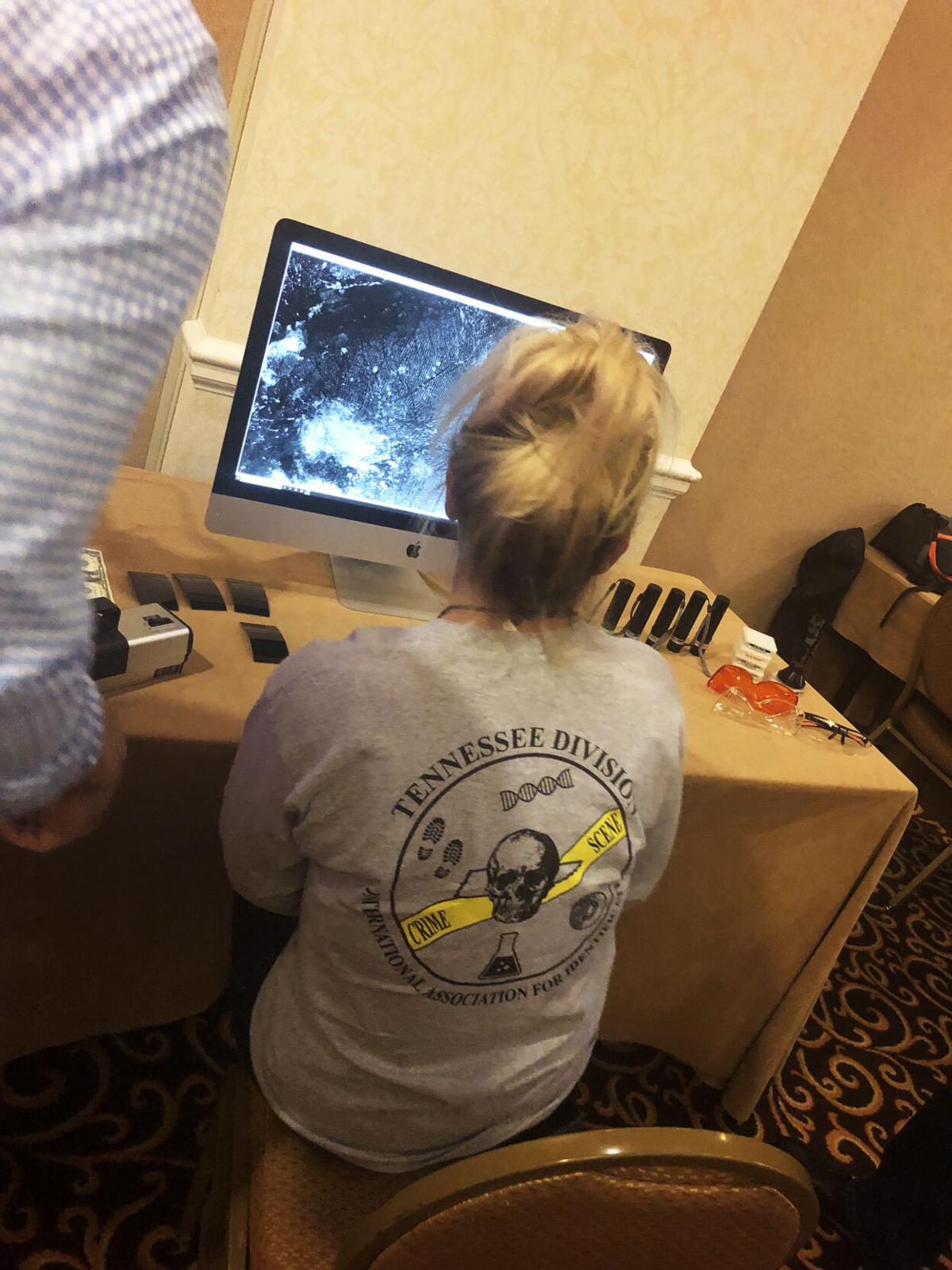 Ben Oddo is a Nashville resident, a writer and the former co-host of The Ben & Morey Show. In his recurring feature Conventional Wisdom, he’ll explore the many conventions and trade shows that Music City plays host to, from the esoteric to the mundane.

I'm sitting in the back of an empty ballroom at the Gaylord Opryland, hunched over a chair as Michele Triplett — a fingerprint specialist for the King County Sheriff’s Office in Seattle — inspects my hands. She explains there are three different types of fingerprints — arch, loop and whorl — and that my skin is unique. For a brief moment, it feels as though I am receiving a palm reading.

But I'm no dummy. In a different setting and in a different context, all this talk about my ridgelines stopping and starting and dividing would be used not to predict my future prospects, but rather to put me away for good.

“I used to work at a jail years ago, and I’d be taking people’s fingerprints, and I’d say, ‘Oh you have awesome fingerprints — you should not be doing crime,’” Michele laughs. “Or wear gloves, that’s my advice to you.”

It’s boom times once again for conventions in Nashville, and that means I am back covering a beat that will be the first to go once this Delta variant swallows us whole. This week it is the 2021 International Association for Identification (IAI) Conference, which is the oldest and largest forensic association in the world.

Over the course of five days, 1,200 forensic scientists, federal agents, crime scene technicians and other law enforcement (along with some academics and Ph.D. pathologists) will gather to attend lectures and workshops, share trade secrets, and pursue certification in things like latent prints and forensic photography. Tennessee, I am told, is an apt location for this year’s conference, as we are home to the famed “Body Farm” in Knoxville, a forensic anthropology center where bodies in various stages of decomposition can be studied by organizations like the FBI. On the center’s website, an FAQ about, “How much longer will you be accepting body donations?” gives as its answer, “We do not anticipate a time where we will not be accepting body donations.” Logical, and yet unsettling.

Most of the lectures at the conference are fairly esoteric (“Assessing inconclusive responses in friction ridge error rate studies — is ‘inconclusive’ always an error?”), so after about seven minutes I stop pretending to know or care about probability statements and sebaceous brass and begin observing the attendees themselves.

The first thing one notices is how many women there are. I don’t know why I expected a bunch of Tom Sellecks, but there is something surprising about the Blood Splatter Gathering being majority women. When I ask conference-goers why they think this is, answers range from “women tend to be more detail-oriented and meticulous” to “it’s a more accessible way to get into the field without having to go through the police academy.” Please do not put me on trial here.

The second thing one notices is that there is a podcast convention going on next door, where shows like Morbid and True Crime Obsessed loom large.

“Wow, what’s that been like?” asks one of the attendees of Podcast Movement, impressed by both my IAI badge and ability to slip into other conventions unnoticed. Lot of women, I tell him.

“Crime scene investigations are like a jigsaw puzzle,” says Celestina Rossi, a bloodstain pattern analyst and crime scene reconstructionist for the Montgomery County Sheriff’s Office in East Texas. “Except before giving you a plastic bag full of pieces, I reach in, grab a whole handful, and throw them in the trash.” Locard’s exchange principle at work.

Still, says Rossi, there is enough pertinent information to piece together your puzzle. “You're always going to start with the flat pieces and figure out where your four corners are. That's your crime scene tape, right? That is your border around the crime scene.” Then, you begin organizing by content and color, and where things might fall within that.

“So that's forensics. We start with connections. We start putting pieces together, like, ‘Oh, my victim has a gunshot, so I need to find a bullet. Oh, there's a bullet hole over here. We need to cut the sheet rock.’ You know? And so therefore if the entry is on this side, then the exit’s on this side, and then we've had a projectile in the wall.”

I ask the group what some of the shows and true crime podcasts get wrong about their profession.

“Some people come in and think it’s going to be glamorous, and you’re not going to go into a hoarder house and stuff like that,” notes one of Celestina’s colleagues. “They don’t have hoarder houses on shows like CSI.”

“We all have varying levels of PTSD,” adds another, “but it’s a very fulfilling job, especially when you can right a wrong. That’s an amazing feeling.”

Getting to tell the victim’s story to a jury seems to be a big part of what drives the people who attend the IAI conference. But the pressure to make no mistakes and have no off days is apparent as well. For my final lecture, I attend a talk about wrongful convictions. Looking around the packed ballroom, it dawns on me that there could be someone in here responsible for putting an innocent person in jail. DNA and fingerprinting may be the gold standards, but not everything is automated or generated by a computer; there are still humans behind a lot of these decisions.

“Our evidence, what we bring to court, has huge implications on people’s lives,” says the featured speaker.

Heavy is the head that, um, dusts for prints.

Not wanting to end on a complete down note, after the speaker finishes I ask Michele if she can describe a crime scene for me. Just a little somethin’ for the road.

Rather than indulge my morbid curiosities directly, she tells me about some of the other uses of fingerprints, such as identifying unknown deceased people. For those found in water, there is a phenomenon known as “degloving,” where the skin slips off the hand like a glove. Later, I will regret Googling this.

Michele explains that she once had to reach inside the skin of a degloved person and swab for prints. It is disgusting and intriguing in equal measure. Yet, I appreciate her for being so open with me — and all the others — about a job they care deeply about and work daily to improve at.

The podcast folks would’ve loved it.