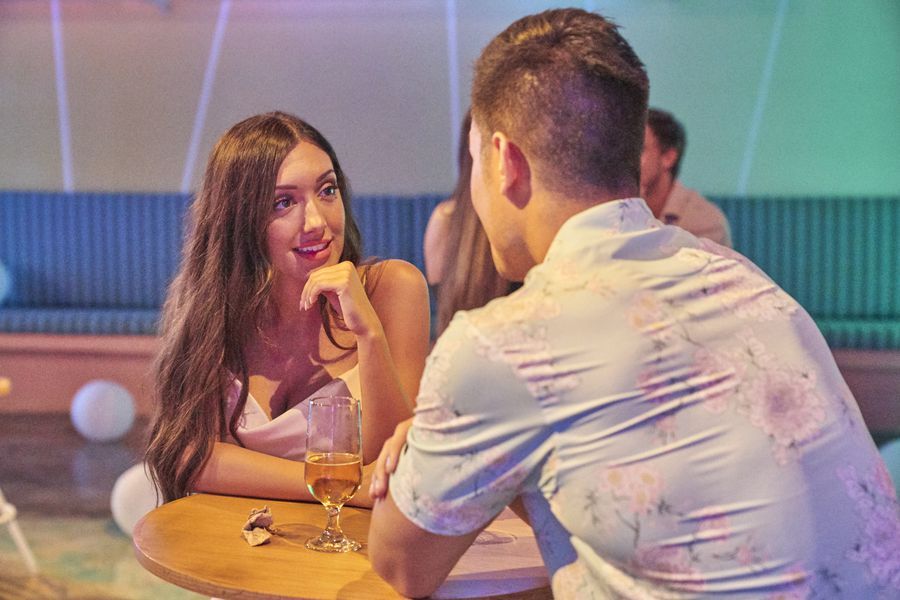 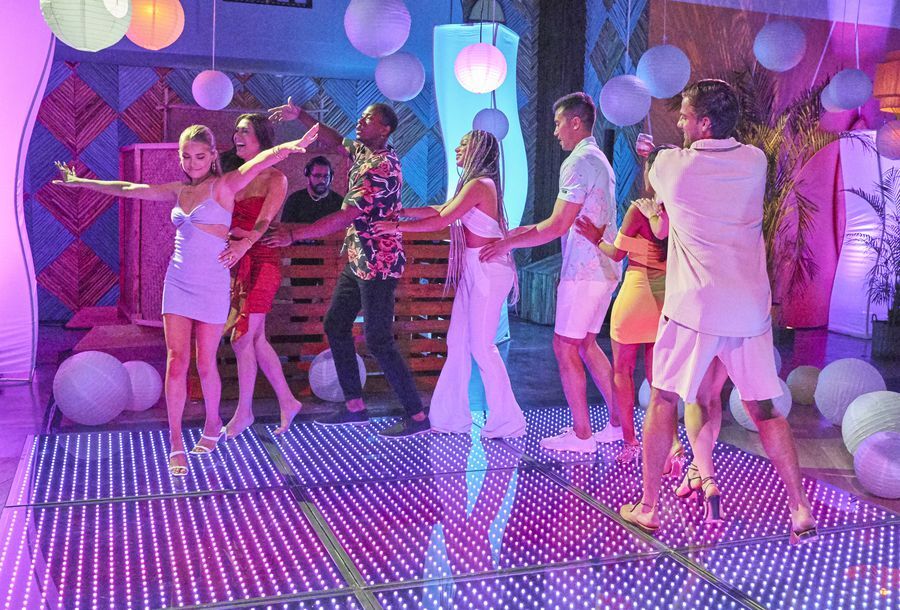 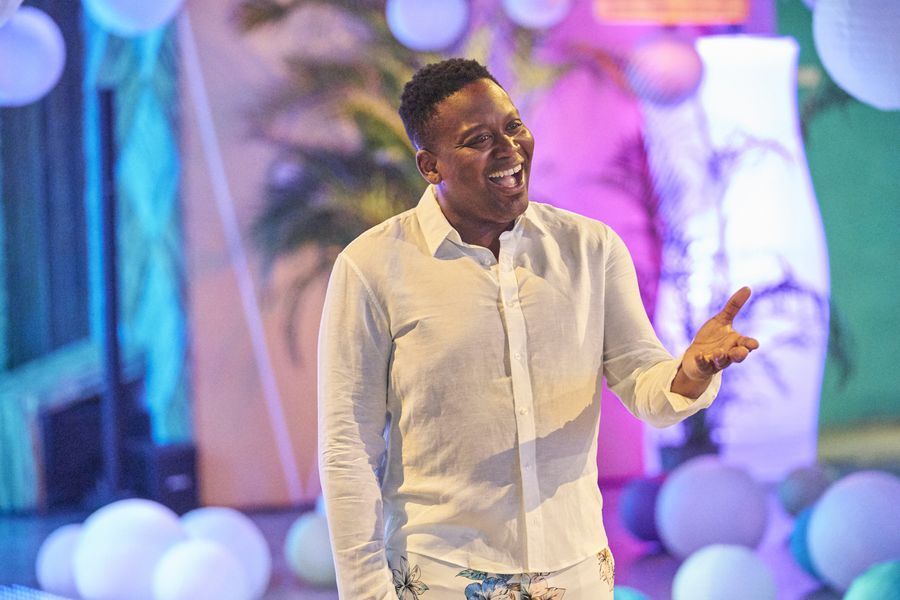 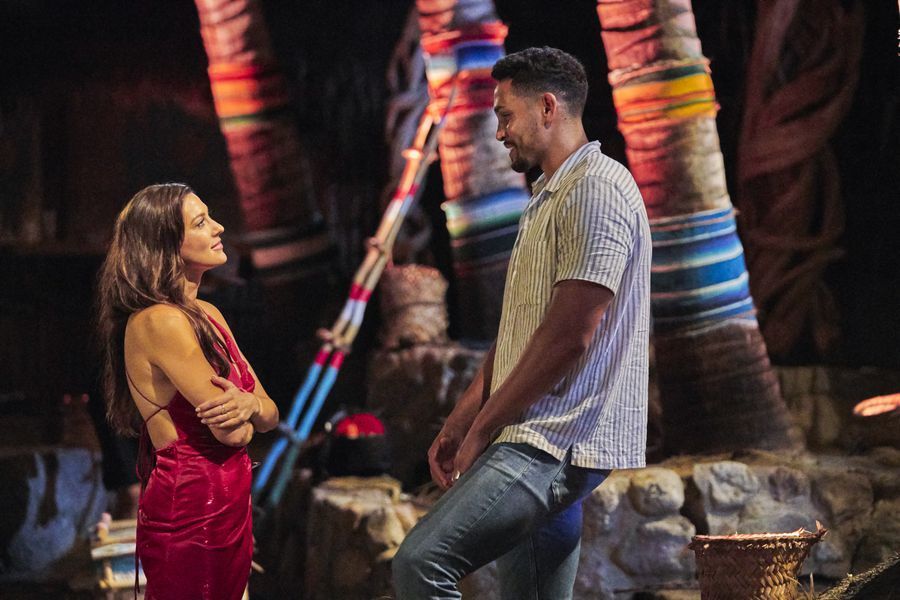 I’m back from Mexico and in a surefire slap-me-in-the-face reminder that vacation is indeed over, I’m back on recapping duty. Big thanks to my colleague Steven Hale who recapped in my absence and struck the perfect balance of being funny enough to keep you reading but not so funny that you stormed the Scene offices with pitchforks demanding my resignation. Right? RIGHT?? On with the show!

For reasons I will never be able to explain, Kenny, a 40-year-old manager of boy band cover bands, is in the middle of a love square with Demi, Tia and Mari. Demi is trying to make his decision easy by inviting him yet again to the Boom Boom Room, and I’m still trying to make sense why anyone would be fighting over Kenny when precious bb Ivan is still on the beach. The voice of an angel interrupts this cringefest and it’s none other than celebrity guest host Titus Burgess. Get rid of all the contestants and give us two hours of Titus, cowards!

Titus announces that he’s throwing a big VIP party but only a select few are invited. The guest list includes Becca, Aaron, Noah, Abigail, Kenny, Jessenia, Chris, Riley, Deandra, James, Thomas and Demi. Tammy tells Thomas that she hopes he has fun but she really wants him to “choose” to come back to her and not feel “forced” to come back to her, which means he will most likely not come back to her at all.

The gang shows up to an empty dance club, and Becca says they’re ready to “PAAARRTTTAAYYY”. OK, Mom, be cool. Titus arrives and brings in four new women who look vaguely familiar but are otherwise unmemorable from their respective seasons: Chelsea, Alana, Alayah and Mykenna. In a shocking plot twist that everyone who watches this show totally saw coming, Alana and Smoke Bro Chris have met before and have chemistry. He says, “BRB” to Jessenia so he can shove his tongue down Alana’s throat approximately 30 seconds after she arrives.

Smoke Bro tells Jessenia that he loves every little thing she does, but apparently loving every little thing Jessenia does isn’t enough to keep Smoke Bro from wanting to do a bunch of other things to Alana’s mouth. A generic pop star that was generated in a lab shows up to sing a generic pop song written by an algorithm, and Smoke Bro Chris starts making out with Alana on the dance floor in front of Jessenia. Jessenia hightails it out of the party (take me with you, girl) and goes back to the beach, where she cries to her friends, and then Maurissa tailspins because she’s certain that Riley is cheating on her at the party. Take a breath, friend. Riley is a prince and he ain’t doing nothing except plotting how to crush Smoke Bro under his fist.

The next morning, Mari pulls Kenny aside and tells him she wants to focus on their relationship. Kenny tells her that he has the strongest feelings for her and he’s never felt this way before. They kiss, Demi sees it and loses her shit. She tries a few tactics — bashing Mari, praising herself, crying hysterically, reminding Kenny of their time in the Boom Boom Room, hiding behind her hair, insulting him, threatening to burn down the entire beach — but shockingly, none of those mature relationship tactics work and Demi ends up alone.

Chris is moping around the beach like a sad sack because he made a dumb decision and is now facing a consequence. Right on cue, Alana, his dumb decision from the night before, shows up to the beach. She asks Smoke Bro Chris on a date, and he pretends to act conflicted about the decision for about three seconds but then proceeds to make a speech to the whole group saying he doesn’t care if he upsets anyone because he’s just following his heart. Everyone proceeds to make fun of him after he leaves. Well done. While Smoke Bro and Alana go zip-lining and choreograph their kisses for television, everyone else is comparing notes and realizing that Smoke Bro and Alana were in cahoots all along to get on the show. Grocery Store Joe wants nothing to do with this malarkey and plans to kick them off the island. At 33, Grocery Store Joe is the elder statesman of this beach and he’ll do whatever the hell he damn well pleases.

Meanwhile, Runway Model Chelsea from Matt James’ season shows up with a date card. She asks out Aaron and they ride horses on the beach. Becca is sad because Aaron is the only guy she’s spent any time with and she’s worried he’s going to fall for Chelsea. A legit concern because have you seen Chelsea? Wowza. I'd consider leaving my husband for her. Becca is two for two with getting engaged on this show, and she was hoping for that Triple Crown.

While he’s still away, Becca gets a date card and decides to ask out smarmy but handsome Thomas. Before asking him out, Becca wants to get Tammy’s blessing, and Tammy’s like, “Sure, yeah, go for it, it’s fine, totally great, do it, have fun, kiss him if you want, go after it, get it girl, do you, live your truth, it’s fine, totally cool, I’m great with it, love you, blessings on you and your offspring.” And then they leave on the date and Tammy bursts into tears. Fear not, those are just the tears of a totally fine, emotionally stable woman.

Smoke Bro Chris and Alana return from their date and have the most bizarre, stilted conversation about their relationship and "connection" before heading down to the beach. Every time these two are on screen, I feel like I'm watching a really bad community theater production of "I Did It My Way: A Bachelor Love Story." I know I say this about everyone, but this time I really mean it — these two are the absolute worst. Grocery Store Joe, Riley and Jessenia are waiting to tell Smoke Bro that he’s a lying scumbag who doesn’t deserve the honor of being on this dignified program. They accuse him of having a relationship with Alana before the show and tell him he should leave. And while I would be quite content to never see this Smoke Bro again, all I can think is, isn’t this the exact same thing Brendan and Pieper did literally yesterday? And no one did anything about it? Natasha and Demi read my mind and start asking that very question themselves. Watch out, Brendan, you blue-eyed turtleneck-wearing douchecanoe. Your time is coming.

Smoke Bro Chris pulls Alana aside and says maybe they should leave and she’s like, “I just got her, bish, and I haven’t earned enough followers yet.” She quickly realizes she can either leave now or she can endure one hellish day on the beach where no one talks to her and then get eliminated tomorrow, so she packs her sad little backpack and leaves. Chris tries to get into the same car with her, but she’s like, “Get your own car, bro. This is my time to shine.” And then we literally never see her face again. Farewell, Smoke Bro and Rando Alana. I barely knew you, and yet I hope to never see your faces again.

Minutes of This Episode Devoted to the Scandal of Smoke Bro Chris Knowing Alana Beforehand: 119

Minutes of This Episode Devoted to the Scandal of Turtleneck Brendan Knowing Pieper Beforehand: 1

Minutes I Gave to This Episode That I Will Never Get Back: 120