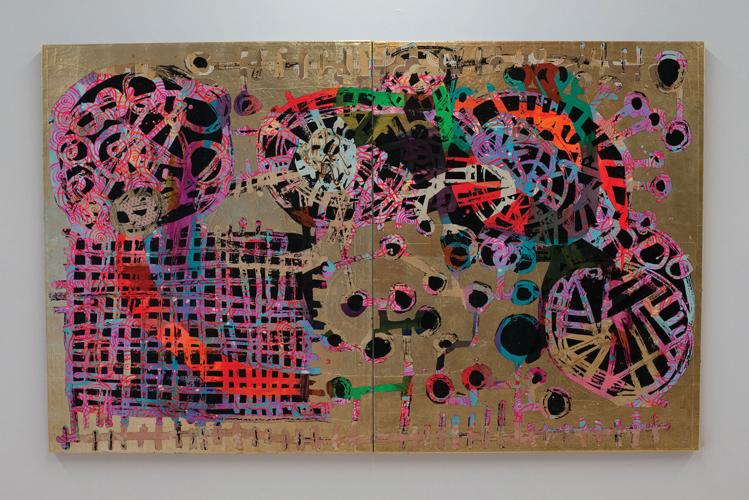 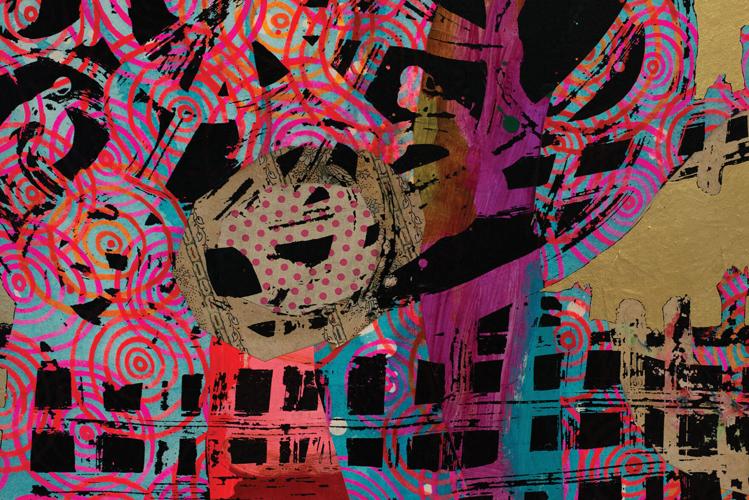 All 20 paintings in Andy Ness’ exhibition The Satellite, currently on view at Julia Martin Gallery, showcase the artist’s idiosyncratic process, which evokes everything from batik textiles to glam rock icons. In his own words, it shouldn’t work, but it does. We spoke to Ness from his home in Minneapolis about one work in particular — a 51-by-82-inch diptych with a title that references a poem by John Milton by way of Grace Jones.

“Cy Twombly said that he often didn’t know what he was doing until three or four months after he’d finished something. And I feel like that about this work. I was just working, and from the work came the work. I was just trying to be a body in motion.

“One of the major reasons that I’ve been using wallpaper and gold leaf in all of these materials that I almost think of as being bombastic in a way, is that these paintings, for me, are totally and completely about freedom. I’m breaking my own rules — I never thought I would use metallic leaf in a painting, because there’s just something so tacky about it. The same thing is true about wallpaper. Back in art school, if you really wanted to offend somebody you would tell them their painting looked like wallpaper — it’s just offensive. So there’s something really freeing about embracing the things you’re not supposed to do. And in a way, I feel like there’s something queer about it — there’s something decorative and unapologetic about it, which I think is very much where I am in my life right now. This might just be something that I’m finding in myself, but I think there’s an instinct to not use a pattern, or not appropriate something that was used for interior design or decoration because it’s something a nancy boy would do. It’s not serious. So I guess that instead of avoiding that, I started running straight toward it.

“A friend took one look at this painting and was like, ‘That painting doesn’t give a FUCK.’ I think that’s correct — it’s very self-assured, but I think it’s hospitable.

“The title ‘Tripping the Light Fantastic” comes from a poem from the 1600s. But how I resonate with it is through Iggy Pop, David Bowie, Grace Jones, and those people who have used that phrase in their music. Julia [Martin] even asked me, ‘Is this show about David Bowie?’ because so many of the titles of these paintings are from Bowie songs or album titles. And it’s not, but because he dealt so much with outer space and with the outsider — he loved that so much — it was sort of inevitable that I would draw parallels to him.”