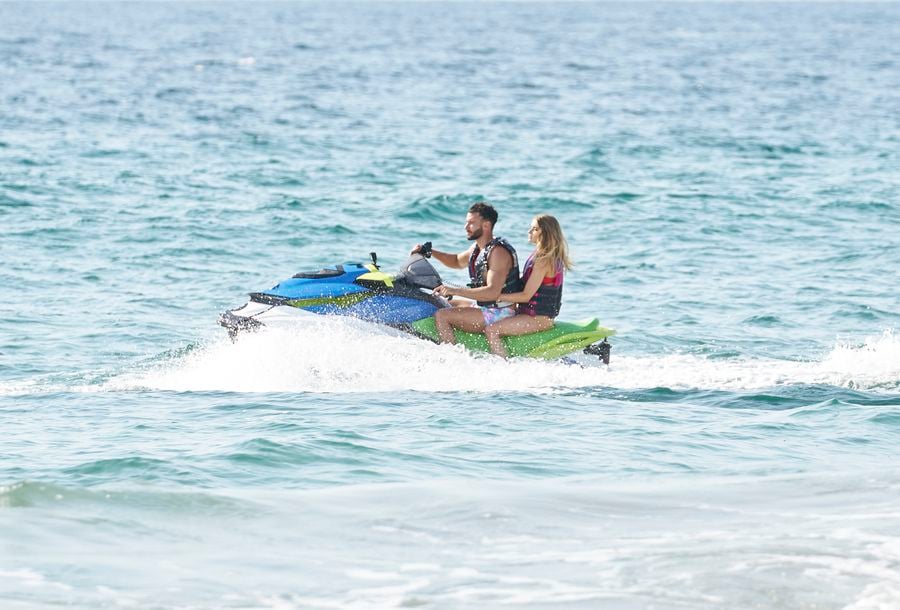 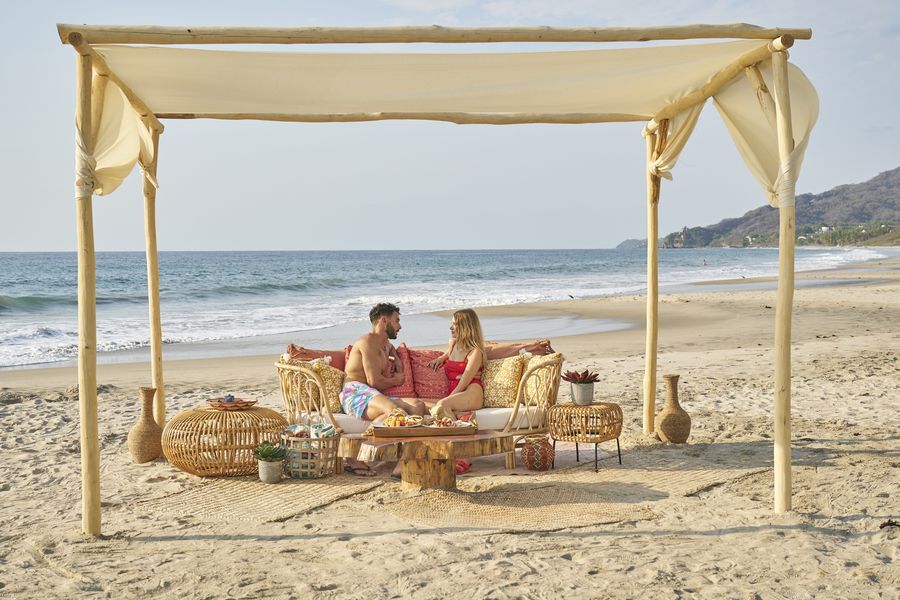 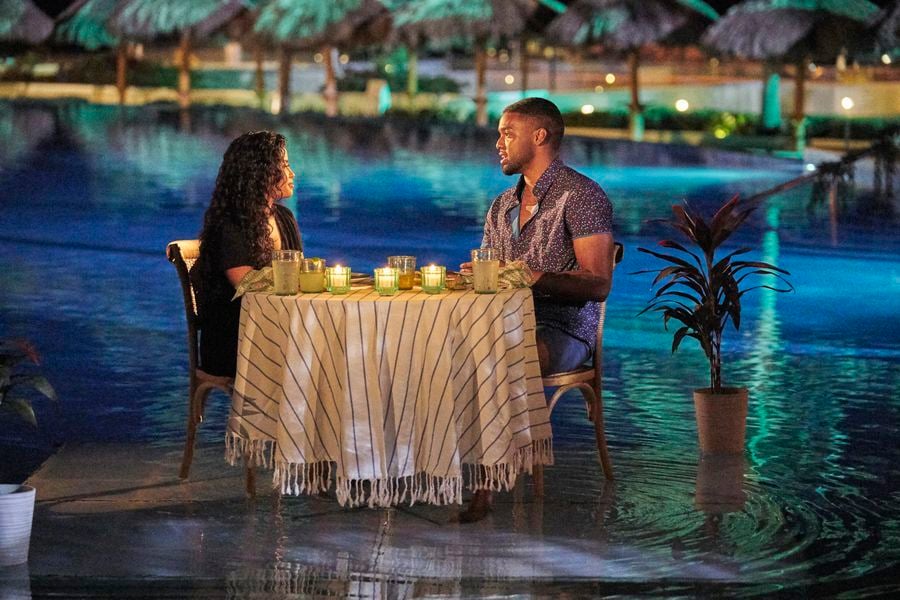 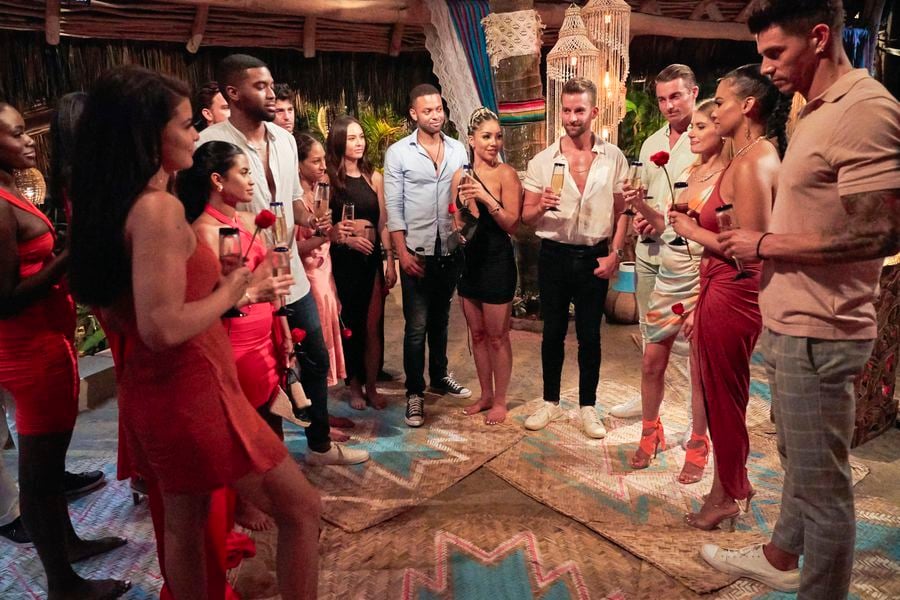 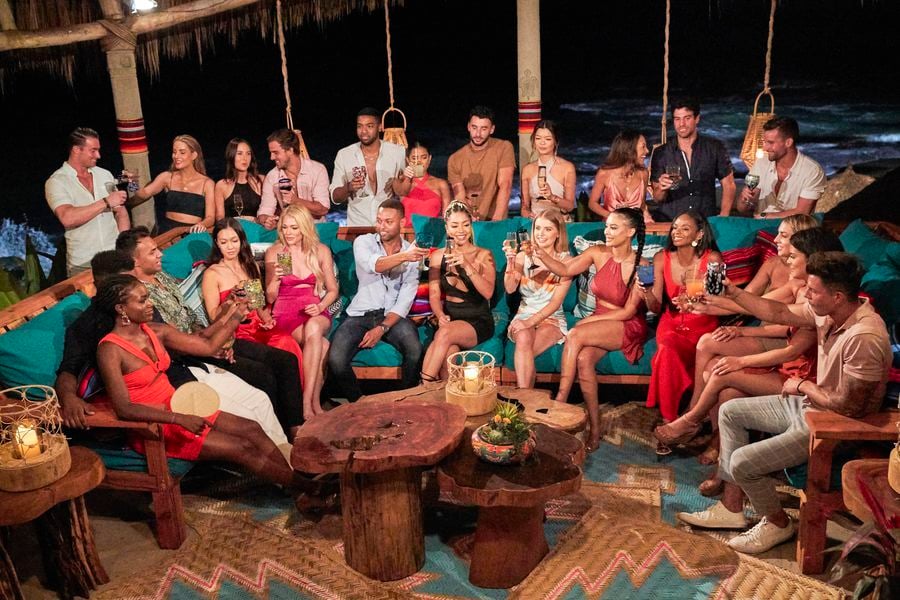 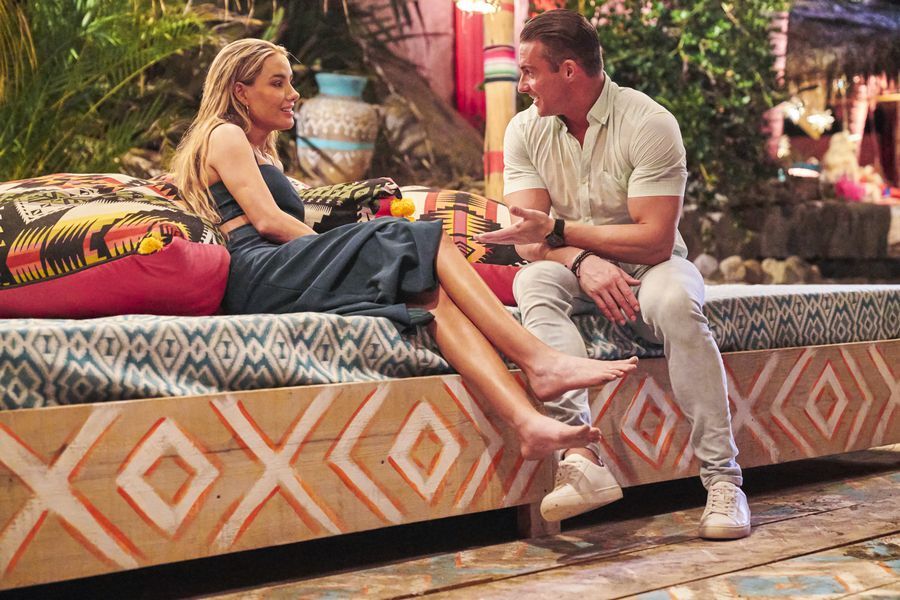 We’re back for another episode of Bachelor in Paradise, a show that desperately wants to be Love Island but falls painfully short time and again.

We start this episode with the level of class we’ve come to expect from this show: Brendan making penis jokes while waving a banana in Natasha’s face. Ahh yes, the traditional Mexican courtship ritual of shoving phallic fruit in the eye of your true love. I am overcome with emotion at the beauty and vulnerability of such flagrant romantic gestures. Who said chivalry is dead?

Sassypants Demi arrives, greets David Spade as Joe Dirt and I immediately remember how much I love Demi. Demi starred on Colton’s season of The Bachelor and was on a previous season of Bachelor in Paradise, where she left engaged to another woman. David Spade asks if she’s going for the P or V this year, and Demi says she’s looking to [bleep] some [bleep] up. Can’t wait to see that unfold, as soon as I decipher what that is.

Demi arrives on the beach with a date card and immediately pulls Nashville Catman Connor to chat. One look at this guy and I can say with confidence that he’s definitely puked off the side of a pedal tavern. Maurissa, the girl who met Catman yesterday and sucked his face, is feeling very heartbroken that the Man She Loves (Read: Met Five Minutes Ago) might date Demi. Demi pulls Kenny next and I’m thrilled to share that he’s wearing clothes, which he promptly begins removing when he sits down with Demi for a chat. We get it, Kenny. You’re 40 and somehow your decrepit husk of a body still manages to have muscles. Bravo! Ultimately, Demi decides to ask Brendan out and Natasha is livid. Who’s gonna shove a banana in her face now? Life is so unfair. True love lasts but a fleeting moment.

Brendan and Demi take to the open seas on jet skis before making the decision to forgo their individual jet skis for a chance to spend the afternoon together on the fantasy jet ski. They get wet ’n' wild and then they go suck face on the beach. While Brendan is still wiping his mouth from that make-out sesh, he says, “So, this has been fun, and, like, maybe I’ll see you around.” Demi tells him she’s “the cream of the damn crop” and that she’s never been rejected by a man before. The only minor exception, of course, was Colton, who turned out to be a psychopathic stalker and gay. Demi is livid that Brendan still wants to date other people after spending 12 minutes with her and says there’s about to be a Category 4 Hurricane Demi, and honestly, if a hurricane took out this entire production and everyone who is a part of it, would that be the worst thing in the world?

Back at the beach, everyone is gossiping about Brendan’s love life and a rumor that he’s allegedly dating Pieper from Matt’s season. Everyone is outraged that Brendan, a man who formerly starred on a show where a woman dated 25 men and now stars on a different show where 20 men are dating 20 women, would deign to date more than one woman at once. How dare you, sir? How dare you?! Have you no dignity? Actually, no need to answer that, Brendan.

While everyone is still in a tizzy over Brendan’s indiscretion, a date card arrives for Jessenia. She asks Ivan, the guy she’s been vibing with since arriving. Goddess Victoria, Blonde Victoria and Champagne Kelsey are less than thrilled about this new development since they haven’t made any love matches yet. They really want to go on a date so they have a chance to connect with someone because it’s very hard to get to know the guys when they live at a resort together and spend every literal day and night together with absolutely no responsibilities. It’s soooo difficult to find someone!

Jessenia and Ivan eat dinner in the middle of a pool and talk about racism and what their experiences have been like on this show as people of color. (Supportive for Ivan; horrible for Jessenia. Imagine that, a woman being treated worse than a man. Bizarre.) It’s actually a very sweet and honest conversation, and I hate when this show has moments that I can’t mock. Ivan tells Jessenia she’ll be getting his rose and then they dive from the dinner table into the pool and do a little underwater humpin’.

Demi returns to the resort by herself, tells all the girls that Brendan rejected her and they tell her about Brendan’s Other Woman. Brendan returns and Demi confronts him about Pieper. He turns into a human thesaurus as he tells her, “I spoke to her, we communicated, we chatted, we messaged, we’ve talked, there’s been contact, we conversed …” He narrowly escapes that confrontation before Natasha pulls him aside and is like, “Soooo, tell me about Pieper.” He talks in so many circles that Natasha is lulled into a trance and forgets what she was even asking in the first place. Game (back) on for these two. Surely there is no way Pieper will make a surprise appearance in a future episode and [bleep] some [bleep] up, so I think we can safely say this situation is fully and completely resolved, never to return.

Blonde Victoria is trying desperately to stay on the show, so she’s cozying up to Steroid McRoids (James) even though she clearly loathes him. He’s basically a stack of steaks in a tight tank top so I get it. The other girls are very upset by Victoria’s game-playing because they know she has a country music boyfriend back home in Nashville. Oooh, intrigue. Who is he? What douchey bar owned by a country bro does he work at as a bouncer?

The men all go through the trouble of putting on pants and buttoning a single button on their shirts for the Rose Ceremony. Four girls are going home tonight, so the ladies start getting more desperate than ever. And for a bunch of women who signed up to humiliate themselves for public consumption, that’s saying something. Serena C. wants to get to know Aaron so she performs a super cringey rap and then kisses him against his will. Five seconds later, Tammy is straddling him, and I think it's safe to say she’s gonna ride that boy to the finish line. Nice try, Serena C. Meanwhile, Goddess Victoria is doing her best to win a rose. See-through dress? Check. Flirting with every guy? Check. Talking in a sexy baby voice? Check! Tahzjuan is mad that Victoria is speaking to Tre, the nephew of a man she once made out with. She says a Tahz-nado is about to blow through the beach. A Tahz-nado? Right on the heels of a Category 4 Hurricane Demi? Climate change is just out of control. We’ve got to start caring for our planet, guys.

Tammy and Champagne Kelsey tell Bromeister James that Blonde Victoria has a boyfriend back home. Oh and also she (Victoria) can’t remember his (Bromeister’s) name. That’s so incredibly rude. Even I know his name. It’s Roidy McRoiderson! No, that’s not it. It’s Beefy Beefmeister! No! It’s Brawny O’Brawnigan. Dammit. James (it’s James!) pulls Victoria and asks her if she has a boyfriend at home. She assures him that she broke up with that guy on Thursday, I mean, in May! Her boyfriend is so supportive that he encouraged her to go on the show … presumably so she could get Insta-famous and help his pathetic country career. A lame-ass generic white guy with a backwards ball cap and a mediocre voice singing songs about whiskey and blue jeans isn’t going to get famous on his own. Oh wait, actually that is literally all the country music industry is looking for so lame-ass boyfriend will be just fine on his own. James is pissed because he gave up so much to be on this show. He quit his job, he left his gym, he abandoned his ‘roids, he ran out of protein powder. Think of the sacrifices, Victoria!

Victoria pulls aside Kelsey and Tammy to confront them. She doesn’t actually deny having a boyfriend; she’s just mad that they told James. She has a complete and total meltdown, tries to put the blame on the other girls and ultimately, after taking some deep breaths in the dark, she decides to leave on her own accord to save face. In the car, she tells the camera that she realized she doesn’t need the show to find what she already has back home. A lame-ass boyfriend who can sing some lame-ass songs to her about his pickup truck and grandmama’s moonshine. It’s what we all want.

James is basically fair game now and he’s repulsive to everyone, but that doesn’t stop these girls from putting in the graft and trying to win his rose. Demi offers to have sex with him, and Kelsey offers to be his completely platonic, uninterested friend. Let’s see what method works.

The gang gathers for the Rose Ceremony. Roses go to Jessenia (Ivan), Abigail (Noah), Serena P. (Joe), Maurissa (Catman Connor), Tahzjuan (Tre), Deandra (Karl), Natasha (Brendan), Tammy (Aaron), Mari (Kenny) and … dramatic music swells … just as James is about to hand out his rose, Kelsey pretends to almost faint. Oh dear, someone fetch Sir Roiderson, Kelsey has a touch of the vapors. James doesn’t fall for that and he gives his rose to Demi. You mean to tell me that Blocky McBlockhead chose the girl that offered him sex over the girl that offered him friendship? This simply does not compute. That means Goddess Victoria, Champagne Kelsey and one of the Serenas are leaving. I'll see you all tomorrow (yes, tomorrow) for another recap because ABC has a personal vendetta against me and they will not rest until I am destroyed.