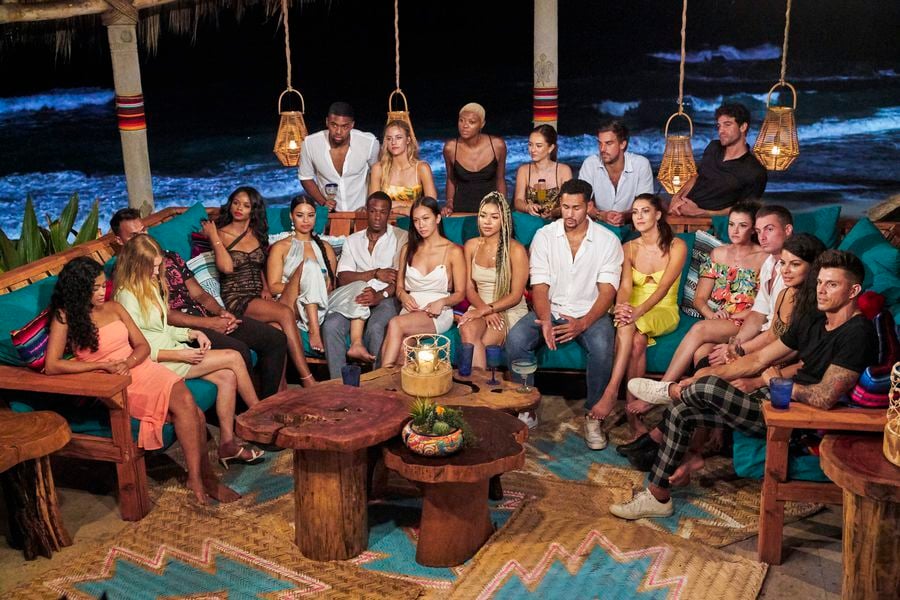 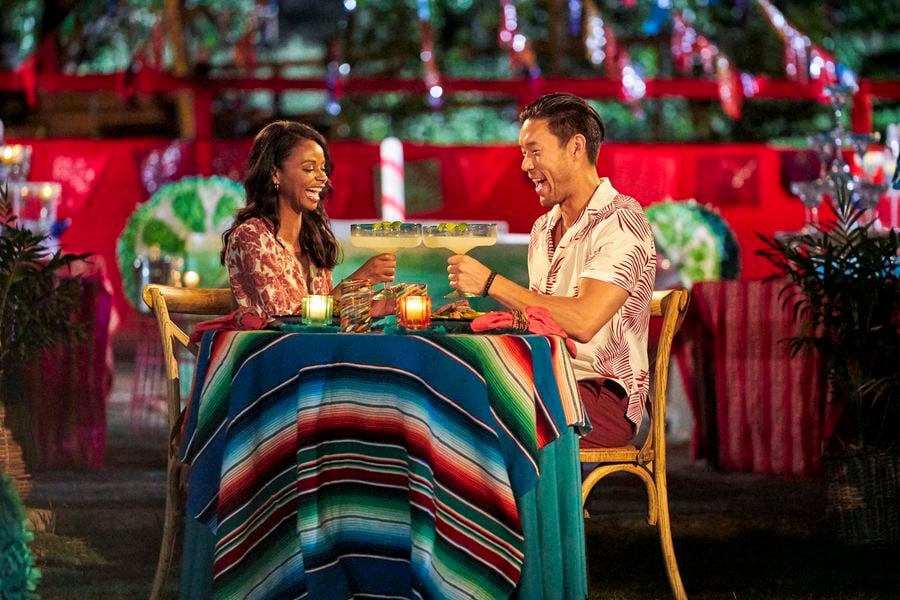 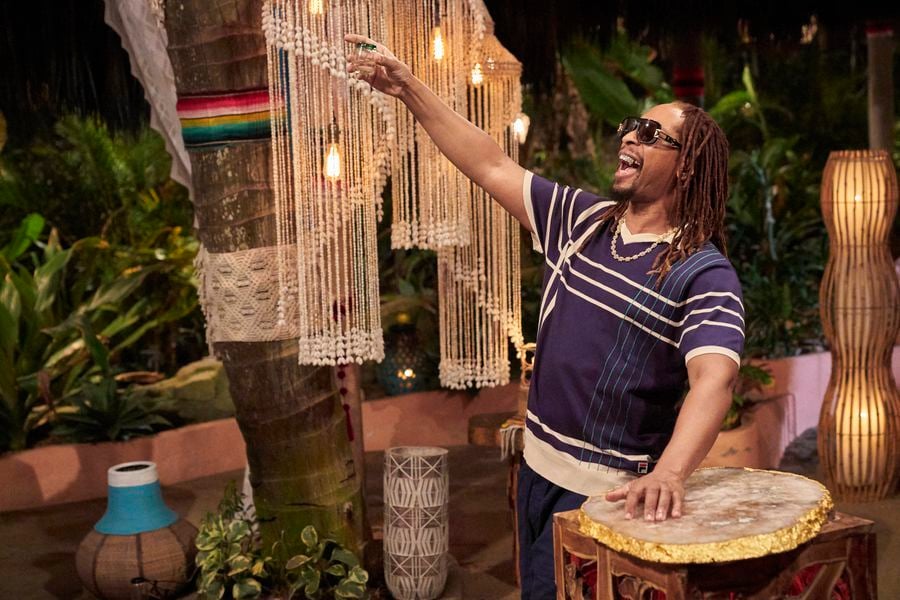 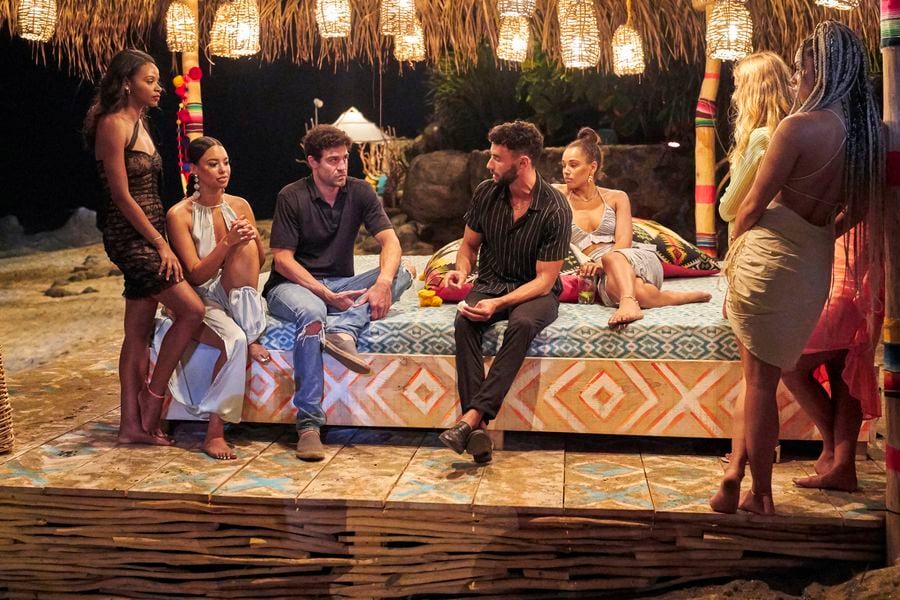 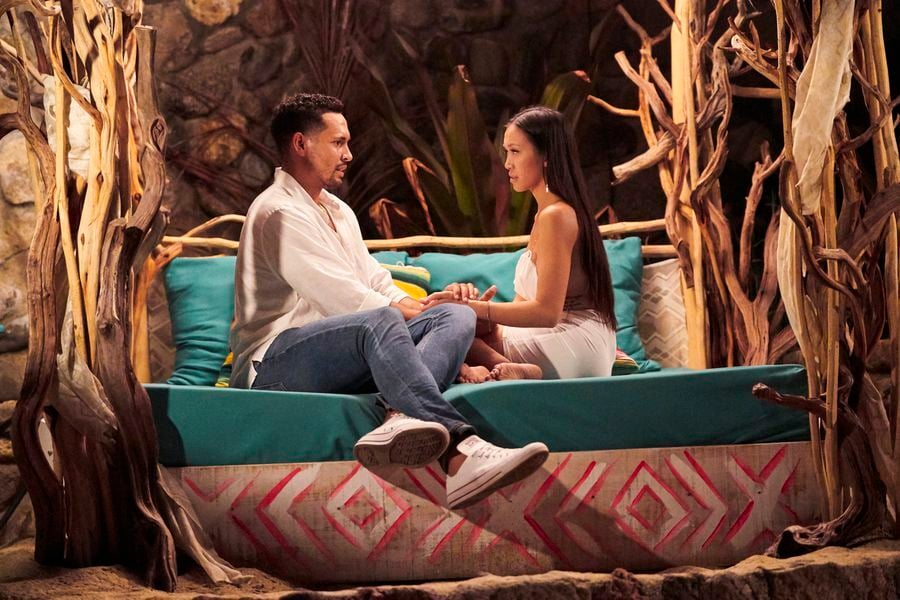 There are nine guys and 14 girls remaining, which means five ladies are going home this week. Math! I’m brilliant! Every week, I give myself a simple little riddle to complete just to prove that this show hasn’t turned my brain to mush. Success! As you may recall, in the last episode, the entire cast turned on Smoke Bro Chris for violating the Bachelor purity vow when he conspired with Alana to fake a relationship to gain — I’m so verklempt I can barely say it — followers. But turtleneck-loving Brendan did the exact same thing with Pieper and no one cared because he is a less terrible human than Smoke Bro Chris, who was a flagrantly terrible human, perhaps more terrible than any other human you know.

Everyone gathers for a cocktail party before the Rose Ceremony and Titus makes a little speech about how anyone who isn’t here for the Right Reasons doesn’t deserve the right to be here at all. Cut to a shot of Brendan and Pieper giggling nervously. The Bachelor in Paradise Hall Monitors — aka Demi, Grocery Store Joe, Natasha and Jessenia — gather to discuss Brendangate. Natasha tells everyone that Brendan and Pieper hung out/dated 10 times before the show and that they were together the day before filming began. Zut alors, how can this be?! Are you telling me that someone would deign to grace this sacred love beach with their presence when they are not completely pure of heart and free of romantic entanglements? It cannot be so.

Grocery Store Joe, who considers it his personal mission to defend the sanctity of the beach, leads the angry mob waving pitchforks and torches to confront Brendan and Pieper. Natasha is upset because Brendan clearly strung her along just to bide his time until Pieper arrived. Everyone is upset because Brendan and Pieper were basically dating but just came on the show for fame. Oh my stars! Are you implying that any of these people would accept a free vacation to Mexico and a chance to star on a TV show for anything other than love? I simply cannot fathom it. Brendan and Pieper go chat on their own and are caught on film talking about how they did, in fact, come on this show to get followers and make money. The illusion is shattered. How will I ever go on after this revelation? After moping around for a bit and doing some quick Google analytics predictions, they decide to leave the show and drive off into the sunset in complete and total misery. And in case you’re considering feeling bad for them, the last thing Brendan says is, “I never meant to mislead anyone. I just withheld information.”

Tammy tells Thomas that, even though he went on a date with Becca and has been sucking her face all day, she is willing to fight for him because he’s her best friend. Whhhaaaa? He’s your best friend after three days? Girl, you need to experience some real meaningful lifelong relationships. Tammy also tells Thomas that she trusted him “with everything.” With everything? After three days? Girl, we need to talk about establishing healthy boundaries. Thomas keeps telling her that he’s not interested and she keeps saying that she is willing to fight for him, like they’ve been married for 30 years and need to think about how this breakup is going to affect their seven kids. Thomas, think about how little Billy is going to handle this news! He will never recover! Thomas hugs Tammy and gives her a speech he read in a Brené Brown caption — ”you are strong and capable and worthy of love … from someone else.” LOL thanks Tom-tom! While Tammy goes to cry to her friends about how she’s going to start over in life as a middle-aged divorcée, he starts making out with Becca.

The gang gathers for the Rose Ceremony and Wells greets the cast with a dramatic speech about how some people LIED this week and came here for the WRONG REASONS and it’s all so UNFAIR because everyone deserves LOVE. To prove this point, he has a security guard bring out an extra rose on a cutting board and he gives it to Natasha as a participation trophy for getting dumped by Brendan. Cool, I guess. It’s worth noting here that Natasha hosts a podcast produced by Bachelor Nation so perhaps the production team doesn’t exactly want her to stay for the Right Reasons either. Roses go to Whipped Cream Baby Maurissa (Riley), Serena (Grocery Store Joe), Kendall (Ivan), Abigail (Noah), Mari (Kenny), Tia (James), Becca (Thomas) and Chelsea (Aaron). That means Deandra, Demi, Tammy and Jessenia are going home. As the remaining contestants are cheersing, Lil Jon shows up because sure why not.

The next morning, an attractive man that I don’t recognize at all shows up and Tia starts swooning. She’s got it bad for the Tatty Daddy as she calls him. (His actual name is Blake.) He asks Tia on the date, and Brobot James is very sad. He can’t understand why things aren’t working out for him, a man who looks like the Disney Hercules cartoon come to life. Let’s analyze what’s been happening, shall we? Every week, right before a Rose Ceremony, a different random girl starts making out with James and, lo and behold, he gives her a rose. But then the next day she wants nothing to do with him. Hmm, why could this be? I’m stumped.

Tia and Blake go on an ATV adventure — BABY COW SIGHTING! — and then drink Champagne in the rain. They talk about their stance on soul mates (don’t believe in ‘em), make out in a shower and Tia feels her vagina dance (her words, not mine). Back at the beach, Mari starts feeling her vaj do the cha-cha too, so she takes Kenny for a repeat visit to the Boom-Boom Room. I hope someone washed the sheets after Riley creamed the bed last night. Whipped cream, people! Get your minds out of the gutter!

The next morning, it’s time for another man to grace the beach with his presence. Oh, look, it’s Dr. Joe from Clare/Tayshia’s season. Fortunately, there’s not a worldwide health crisis and medical staff shortage going on so I’m sure it was super easy for him to get an indefinite amount of time off work. He asks Natasha on a date and they go drink margaritas out of bird baths and talk about their feelings. Dr. Joe reads his cue cards correctly and asks Natasha why she’s still single. She tells him about how Brendan treated her horribly, and he replies, “MY Brendan?” Oh yeah, did I fail to mention that Dr. Joe and Brendan are BFFs in real life? After hearing this sordid tale about his beloved Brendan, Dr. Joe switches gears really quickly and is like, “Wow, this was a fun friend date, maybe I’ll see you around sometime on the same 100 square feet of beach that we are both living on.”

Back at the beach, Grocery Store Joe and Serena are in full-on cutesy couple mode and he plans a little rose petal-strewn cuddle sesh the beach. Serena tells Joe that she’s falling in love with him and he says the same. My husband passes through the room long enough to acknowledge that they’re cute but that Joe will soon tire of Serena’s 23-year-old energy. Ah, spoken like a man happily married to a woman who complained six paragraphs ago about being tired at 8 p.m. Meanwhile, Joe’s ex Kendall is just sitting nearby watching intently as Serena and Joe practically consummate their love on the beach, and she doesn’t care for it one bit. She disappears into the jungle, presumably to taxidermy a parrot or something, and the scene fades to black.

Couples Sent Home for Coming to the Beach for the Wrong Reasons: 2

Couples Who Are Actually Here for the Wrong Reasons: All of them