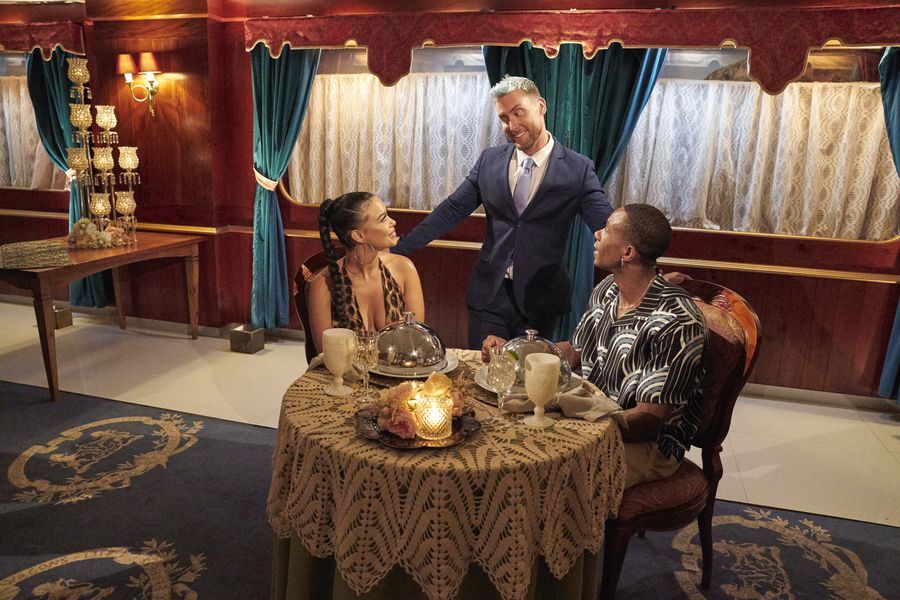 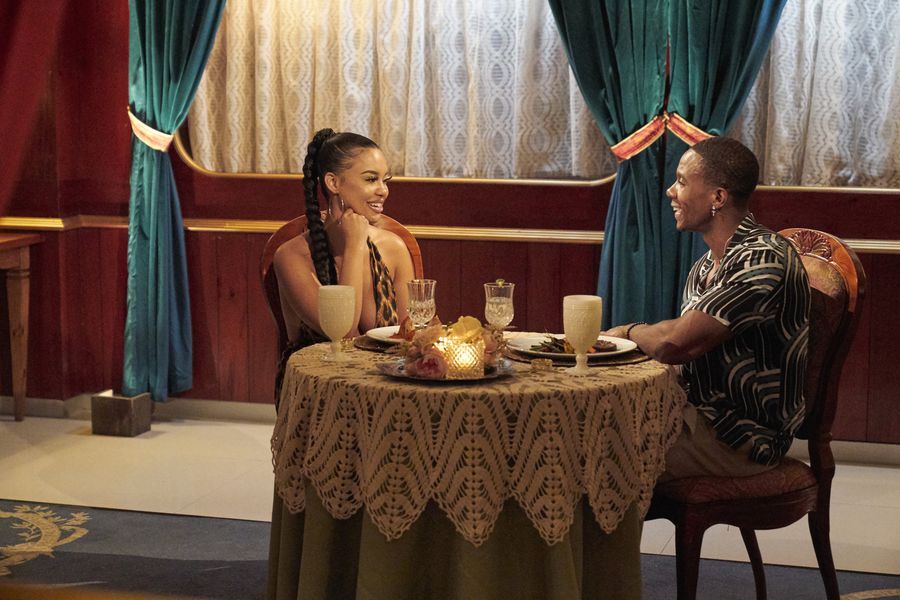 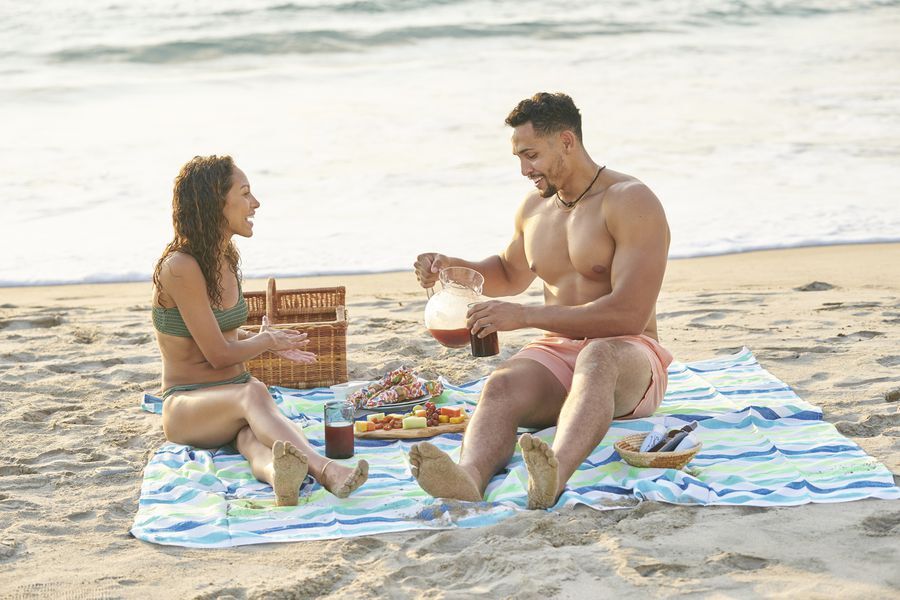 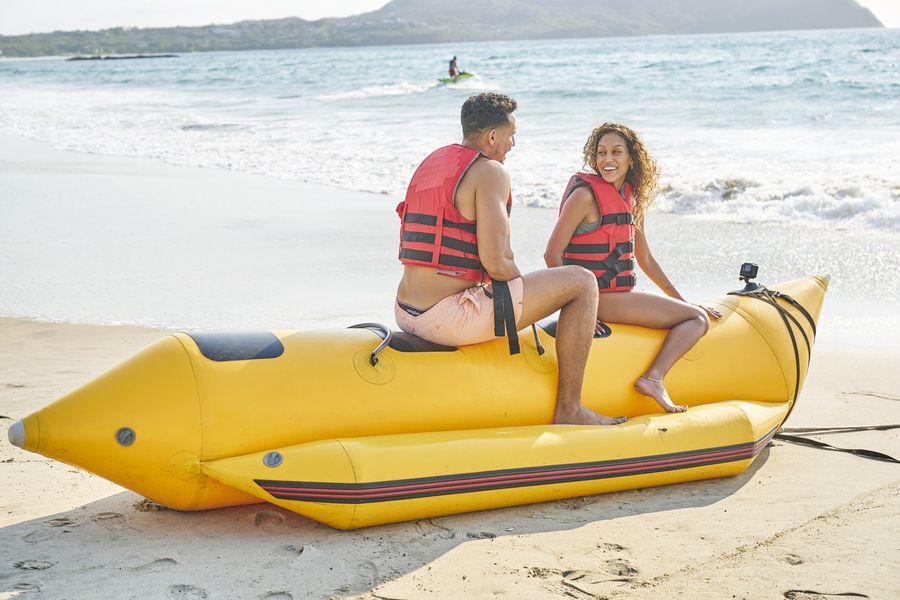 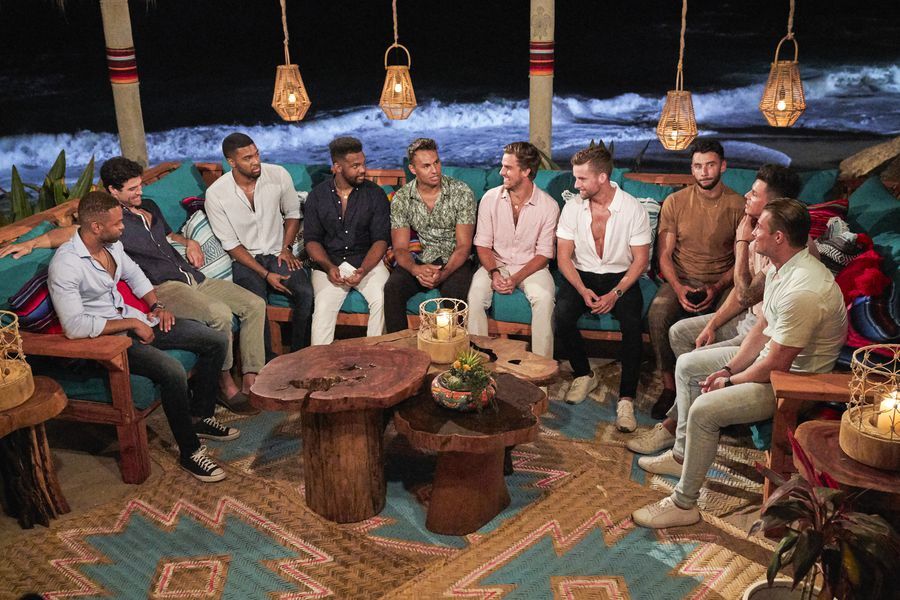 Fancy seeing you here, wasting another two hours of your life on trash television! Fortunately for both of us, the world is in peril and our time is limited, so investing ourselves in something worthwhile is completely useless. More hot people hooking up on beaches, that’s what I say.

It’s the morning after the Rose Ceremony, and most of the contestants are comfortably settling into their new relationships. Peace seems to be flowing through the resort, and that can only mean one thing: It’s time to introduce a ’90s boy band has-been into the mix. A boombox is delivered with a Post-it note that says “Play me.” Legit question — do these contestants even know what a boombox is? Surely Urban Outfitters ironically sells a set of iPhone speakers that looks like a boombox, so I guess it's possible. The boombox in question starts playing N*Sync’s “It’s Gonna Be Me,” and despite the fact that this song came out when most of these contestants were still in diapers — seriously, the song was released 21 years ago, Google it — everyone is thrilled to hear it. I mean, who doesn’t love cutting a rug to the oldies? A very tanned, very waxed, very Botoxed man with bleached hair arrives on the scene, and sources tell me it is former N*Sync member and almost-astronaut Lance Bass. By “sources,” I, of course, mean the chyron that says “Lance Bass, Guest Host.” I would love to see the contestants play a quick game of “Name the Members of N*Sync.” Uhh, Gay One, Creepy Braids, Creepy Facial Hair, Smiley McGee and Justin Timberlake. Boom, give me the prize.

Forty-year-old Kenny, the only contestant old enough to have actually purchased an N*Sync CD or know what a CD is, is particularly thrilled to see Lance. If it weren't for N*Sync, the boy band cover band that Kenny manages wouldn’t even exist, and what a wonderful world that would be. He owes Lance his life. Maybe these two will end up together.

Meanwhile, the guys are starting to fret, because the women will have the roses this week. They’re all speculating about who might arrive, and they unanimously agree that they would absolutely hate to see Thomas. Hmm, I wonder who the producers will send in next. Whaddya know? It’s Thomas, the very man whose arrival the guys were dreading. The ladies, however, do not seem even remotely sad to see this tall hunk show up on the scene. Despite being convinced that they were madly in love six minutes ago, the girls seem to have forgotten all about their new boyfriends once they lay eyes on this dreamboat and his barely buttoned lavender shirt.

It turns out the reason that all the guys hate Thomas is because he admitted to wanting to be the Bachelor. The unpardonable sin. Everyone knows that the only rule in Bachelor Universe is that you’re never supposed to say out loud that you’re using the show to gain a platform, even though it is literally why 100 percent of these people come on this show. Thomas chats with all of the women and ultimately ends up asking Serena P. on the date. She says yes, much to Grocery Store Joe’s chagrin. Now we have to watch about eight hours of him moping around and pouring out his heart to Wells Adams.

Serena and Thomas ride a motorized banana in the ocean, and Serena tells the camera 20 times that she is very sexually attracted to Thomas. In a display of masterful editing, we go back and forth between clips of Grocery Store Joe telling Wells that he thinks his connection with Serena is real, and clips of her making out with Thomas on the beach.

Meanwhile, back at the resort, Riley shows up and Tahzjuan starts having hot flashes. She’s so flustered about Riley that she can’t even form words. By the time Riley chats with all the other girls and gets back to Tahzjuan, she has found her voice and uses it to tell him that she wants him and he’s the only guy she was interested in meeting in Paradise. Riley seems flattered, but ultimately asks Maurissa out. Catman Connor is devastated, but come on — he’s a math teacher who likes to wear cat costumes and sing terrible spontaneous songs. Surely this isn’t the first time he’s been rejected.

On Thomas and Serena’s date, she asks him about the drama on his season. He proceeds to badmouth everyone, but he pulls one of my favorite moves ever: justifying his complete assholery as simply being honest. Who can be mad at a man with such integrity? He was just telling the truth, and it’s not his fault if the truth was that every other guy was a dirtbag unworthy of love. Serena and Thomas walk off into the sunset, and he is such a massive behemoth that she looks like a child with him. We’re left hanging on how Serena feels about Thomas until she gets back to the resort and talks to Grocery Store Joe. She tells Joe that she told Thomas to pursue other women and that she’s only interested in Joe. My cold, dead heart feels a flicker of happiness.

In a desperate Hail Mary to save his reputation and help him get some booty this season, Thomas pulls the guys from his season aside and apologizes to them individually. He seems honest, vulnerable and sincere. Is Thomas, a man who spent an entire season lying and sowing discord, suddenly trustworthy and loving? I simply do not know. Fortunately, Serena and Tahzjuan are here to dispel any myths about Thomas’ sudden change of heart. Serena tells everyone that on her date, Thomas told her that Tre was emotionally weak. Tre shows his strength by getting in Thomas’ face and telling him their “friendship” is over.

Maurissa admits that this is her first date ever. Yeah, you read that right. This isn’t just her first date on the show, it’s her first date in life. She comes strolling down the beach looking like an absolute goddess in a deep-plunge leopard dress.

She and Riley arrive at a beautiful hotel and she’s so excited for a romantic, enchanting evening. Instead, Lance Bass pops up from behind a table like a terrifying Jack-in-the-Box with fillers and highlights. He reveals a platter of disgusting foods — pig snout, cow tongue, you get the point — and tells them that he’s going to ask a series of questions, and for every question they’re unwilling to answer, they have to eat something disgusting.

The questions start simply enough — ”Have you ever said 'I love you' without meaning it?” — and quickly get into more personal territory. They eat tongue to avoid revealing how many sexual partners they’ve had, and eat tripe to avoid sharing their most embarrassing moment. A few minutes later though, after revealing their masturbatory habits and their biggest turn-ons, Riley starts eating Maurissa’s tongue, while Lance Bass just creepily watches from across the table. The screen fades back to the beach where Catman Connor is singing a sad song on his ukelele. Lol what a dweeb.

Riley and Maurissa are finally served a normal dinner, which they completely neglect for the duration of their date while they just talk about their future families and start making out. They move the make-out session to the alley outside and then eventually to the Boom-Boom Room, where they quickly start trying to make a baby. I guess pig snout is an aphrodisiac.

Viewing Party Guests: 2 (me and my sweet friend who is currently staying at my house and thus was forced to watch this show against her will

Drinks Consumed: A bottle of wine

Tongues Eaten: Far too many to count